Home » Lifestyle » I work with a married couple and it’s terrible. What should I do?

Each week, Dr Kirstin Ferguson tackles questions on the workplace, career and leadership in her advice column “Got a Minute?” This week, working with a married couple, an unethical reference check, and the woes of an external candidate.

I have started a new role at an exciting tech company but I’ve hit a familiar problem: working with a couple. At my previous job, there was a couple in my team (small department) and it created some stressful situations. Now in my new role, the key team members are married. They make decisions between themselves, aren’t open to suggestions and do not go against each other’s ideas and views on core parts of work. I have spoken to my boss about this, and he said it’s a tricky situation and is completely reliant on both for their work. I am hesitant to look for a new role because I like the company, but I don’t want to work with another couple again. Advice? 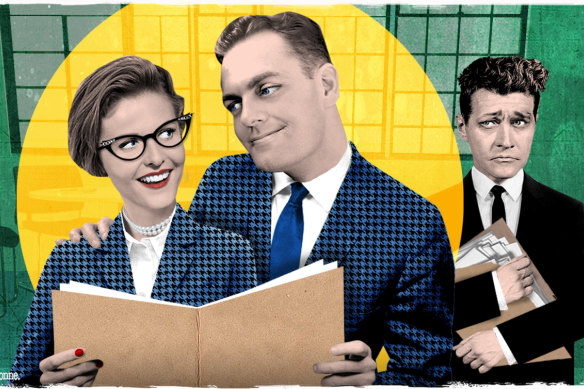 Couples who work in the same team can leave others out in the cold.Credit:Dionne Gain

There was recently a letter to this column about the conflict of interest caused by a mother supervising her son at work and this issue relates to a married couple – both situations are red flags for a healthy workplace culture if not managed well. Like you, I have worked with married couples before, and sometimes it has worked seamlessly and other times it has been a disaster. It all comes down to the self-awareness of the couple to understand how their relationship impacts everyone’s perception of them. We all know two people at work who are not married but are thick as thieves – they may make decisions together, are not open to suggestions and don’t go against one another. These behaviours are never helpful but when the two people are married, those same behaviours are much more problematic.

It sounds like you have tried to go to your boss, and he wants to avoid dealing with the issue. That is your real challenge. If your boss is prepared to tolerate this and not have the difficult conversation with the married couple – even something as simple as reminding them of how their behaviours will be amplified given their personal relationship – then I suspect nothing is likely to change. Perhaps give it a little while longer to see how it pans out given it is a new job but if you don’t see any improvement, then I doubt anything is likely to change.

I was a referee for someone recently and I was asked whether the person had any injuries or anything that may preclude their performance in the job. I was not quick enough to respond that this question was not ethical (or perhaps even legal?). Should I give feedback to the HR department of the employer? It was clear that the person was asking questions from a template or pro forma.

Despite any legalities involved, that is a strange question to be asking a referee anyway. How would you necessarily even know if the person had any injuries and, I am assuming, anything else (like a mental health issue?) that may impact their performance?

I would wait to make sure the person you were a referee completes the process and either gets (or doesn’t get) the role and then yes, I probably would say something to HR or the recruitment firm. It sounds like someone has added that question without thinking about the consequences. The company could find itself exposed if a referee innocently answered yes and disclosed something to the potential employer. If the person then didn’t get the job, regardless of the reason, the applicant could argue it all came down to this inappropriate question about their health.

It sounds like you have been very persistent with trying to work at this particular government department and no doubt feel frustrated that you have not been successful over the past 10 years. Have you been able to ask to meet with the recruitment team to understand where your application is lacking and what you need to do differently to have better success? When you meet with them, you might also inquire about how external candidates are best able to compete against internal candidates who may know the selection panel and certainly know the department well. The HR team may be willing to share some of the key attributes they are looking for, so you can adapt your application in the future.

Send your questions about work, careers and leadership to [email protected] Your name and any identifying information will not be used. Letters may be edited.

Dr Kirstin Ferguson is a company director, executive coach and author. She is also an Adjunct Professor at the QUT Business School and former Deputy Chair of the ABC.