With a sinking heart, Jessica knew the job interview wasn’t going well. Midway through, still foggy-headed from staying up with her sick daughter the night before, the political consultant felt her confidence slipping away.

“I managed to keep going even though I knew I hadn’t prepared enough,” she says. “But the next
day I was mortified to hear the damning feedback they’d given to the recruitment consultant. They said that while I had the quantity – the years of experience – I lacked the quality. It was really quite cutting.” 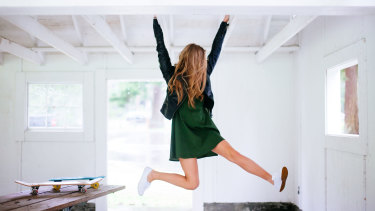 Rebecca Mason: “I had an entire wall of my own errors and failures. I found it hugely empowering. Now I see failure as necessary.”Credit:Stocksy

Her confidence was badly damaged. “I gave up on the job search and stayed in a position I’d outgrown. Even when my boss left and I knew I could easily have done that job, I didn’t go for it.”

Many of us have a failure horror story, be it a relationship rejection or exam blunder, that still has the power to make us shiver however long ago it happened. But even without a moment of dramatic failure, just the fear of it can make a profound impact on our lives.

For me it has meant steering clear of the things I thought I couldn’t succeed at. During school, it was anything to do with numbers. At university, I wouldn’t have dreamt of trying out for a sports team. Why put myself in a position to fail – publicly?

I’ve even congratulated myself on it. By dividing an uncertain world into the things I can and can’t do and sticking firmly in my lane, I’m both protected and can project success. Win-win.

Except now I watch my daughters. My one-year-old falls 100 times a day and bounces back up, and my three-year-old happily misses the mark at everything from French to swimming. At 39, I want to know their secret, not least because, as they grow up, I want to help them preserve that spirit.
I don’t want them to follow in my failure-fearing footsteps.

Luckily, in 2019, learning to train your failure muscle, just as you would your yoga core, is a hot topic. There are the books and podcasts to prove it – and fashion ranges, too. This season, the words “Fail Better” are emblazoned on designer scarves, inspired by Irish playwright Samuel Beckett’s words: “Ever tried. Ever failed. No matter. Try again. Fail again. Fail better.”

Across the globe, people are unpicking our obsession with perfection, looking at what lies at
the heart of our dread of failure, and trying to master failing “better”.

The School of Life, dedicated to developing emotional intelligence via workshops and events, found its How to Fail class was so popular in London it then launched it in Amsterdam, Taipei, Sydney, Melbourne and Antwerp. More than 700,000 people have tuned into Elizabeth Day’s hit podcast How to Fail, featuring everyone from pop singer Lily Allen to BBC news presenter Mishal Husain talking about their experiences of missing the mark, which evolved into the book How to Fail: Everything I’ve Ever Learned from Things Going Wrong.

And it’s not the only tome on the failure bookshelf. Reshma Saujani’s book, Brave, Not Perfect, has become an international bestseller and Karen Rinaldi’s It’s Great to Suck at Something also appeared. Caught up in what she calls “aspirational psychosis”, Rinaldi believes that constantly chasing the impossible is getting us nowhere. She highlights the importance of admitting our defeats and giving ourselves the freedom to fail.

That’s certainly the experience of the women who flock to Winging It Club, a blog-turned-community set up in Britain by Ceriann Smith in 2016. Plagued by perfectionism, Ceriann wanted to create a place where anyone who wants to can “escape the shackles of perfection and give themselves permission to just go for it”.

The common thread in all of this is the desire to accept the inevitability of failure and use it to our advantage. And those lessons are starting young. Natalie Costa, a British life coach who works with children as young as five, says 90 per cent of parent inquiries now include concerns either about a child terrified of making mistakes or the problem of having a child whose mistakes lead to emotional outbursts. Which is why, in 2017, she developed specific failure-training strategies. Her methods include showing children how to reframe mistakes as “yes moments”.

“Instead of getting upset by them, we stop and have a celebration,” she says. “I encourage them tob record what they’ve learnt from making that mistake, and by writing it down they’re able to see the list of their ‘new learnings’ grow.”

Next she cracks open the Play-Doh to teach them about neuroplasticity. Making a model brain, she shows how mistakes help new neural connections to grow. The good news for grown-ups, says Rinaldi, is that failure training works far beyond primary school.

Start by doing something with passion but no pressure. “If we’re afraid to fail, we keep opportunities for growth, love and fulfilment out of reach,” she says. “Pick something you’ve always longed to do. It could be playing an instrument, knitting or tai chi, anything that’s appealed but which you stopped yourself doing by telling yourself, ‘Oh, I’ll never be any good at that.’ By learning something new and practising something you love without the pressure of having to master it, you’ll get acquainted with failure. This will help when you fail at other things.”

It may seem irrelevant but language also matters, says Saujani. By adding the word “yet” to a statement of a perceived failure, you transform it into a temporary setback. (“I’m just no good at doing my accounts – yet.”) It’s a small mental shift, but a powerful one.

If that sounds easily doable, this next piece of advice may need a deep breath. Saujani advises to ask for “cold, hard, unadulterated feedback” when you know that you missed the mark. And seek that feedback everywhere: work, relationships, friendships. It’s a form of radical exposure therapy, she says, and is the best shortcut to realising that critical feedback doesn’t hurt nearly as much as you fear it does.

When you’ve gathered that feedback, don’t keep it all to yourself. Saujani believes that sharing failures, rather, is a good modus operandi if you want to become a happier loser, whether that’s being more open with friends, or even throwing a “failure party”.

Going public with her feelings certainly helped 39-year-old Rebecca Mason, after a recent university reunion. “I looked at my peers and felt I’d really failed. After studying, I’d walked away from a great city career to be an artist. The art itself was going really well, but following the dream of running my own gallery full-time just left me feeling trapped and unhappy. That night I felt left behind.”

After a low week she decided to face those feelings head on. She organised an art installation called The Sorry Stall where people could share their mistakes for all to see. “The response was fantastic, people shared personal stories and I had an entire wall of my own errors and failures. I found it hugely empowering. Now I see failure as a necessary occurrence. The key is to not deny the failure, but to face it and know that so many of us feel the same at points in our lives – it’s human.”

This public declaration of failure chimes with a trend for people to create and share a “CV of failures”. In 2016, Johannes Haushofer, assistant professor of psychology at Princeton, wrote a CV listing every degree program he’d failed to get into, each award he’d missed and every job he didn’t secure.

It went viral because he was seen as a success. It was a world away from the glossy image successful people project (what Rinaldi calls the “performative mode”, fed in part by those finely curated Instagram accounts). His CV reminds us that behind every success are many missteps.

As for Jessica, it took almost four years for her to get her confidence back and start looking for a new job. What changed? “I realised everyone has failures, even really successful people. So I gave myself a stern talking to, promising that I wasn’t going to let my next failure become a big thing, and it worked. When I made a mistake at my next interview, I faced it head on with confidence and got the job. Now I’m six months in and really enjoying it. It sounds a cliché, but it’s been empowering to know I can make myself tougher.”

This little-and-often strategy is vital, says Saujani. We have to keep practising our bravery every day, training our brains, so when we hit those inevitable bumps in the road, we’re ready to flex our failure muscle.

This article appears in Sunday Life magazine within the Sun-Herald and the Sunday Age on sale December 8.

Meghan Markle Heartbroken Her Dad Won’t Walk Her Down The Aisle – Who Will Take His Place?