Two boxers circling each other in the ring: a favourite image used to describe the relationship between Henri Matisse and Pablo Picasso. One wonders if it inspired those notorious promotional photos of Andy Warhol and Jean-Michel Basquiat as boxers in the 1980s. Indeed, it says a great deal about the evolution of the art market that a throwaway line of one era should spark a commercial photo shoot in another. 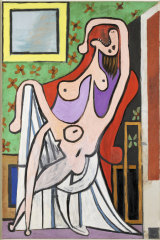 Matisse & Picasso at the National Gallery of Australia is the first exhibition held in this country that brings together the work of two men widely believed to be the greatest artists of the 20th century. It's purely a local novelty because the idea has had numerous international airings, the most important being Matisse Picasso of 2002-03, a joint initiative of Tate Modern, London; the Grand Palais, Paris, and the Museum of Modern Art, New York. The most recent double survey, as far as I can tell, was held in San Antonio, Texas, in 2014.

Along with the exhibitions we've seen a stream of publications exploring the Matisse-Picasso nexus, to the point where one wonders if the theme may be approaching saturation. The NGA is hoping local audiences are still hungry, and not too daunted by a bushfire season that has made road travel to Canberra into an obstacle course.

It would be futile to judge Matisse & Picasso by the standards of the 2002-03 exhibition, as the NGA stood no chance of securing loans of comparable quality. What we have instead is a show that does the best it can with whatever was available. That means numerous borrowings from Australian public and private collections (the most conspicuous absence being Picasso's Weeping Woman from Melbourne), and every work-on-paper that can be scrounged from the NGA's voluminous holdings.

This show is a swansong for senior curator, Jane Kinsman, whose experience and professionalism will be missed. Those qualities are in evidence in an exhibition design and hang that have made an engaging display from a pool of works that includes few indubitable masterpieces.

It's not that the NGA hasn't made valiant efforts to borrow items from overseas collections. Many of the highlights are sourced from leading museums in France, Great Britain, Spain, Brazil and the United States. The most important lender has been the Musée National Picasso in Paris, which has provided four excellent works. The first is Picasso's Still life with pitcher and apples (1916), surely one of the most weirdly sexualised still lifes ever painted, in which a jug and four pieces of fruit suggest the female body. 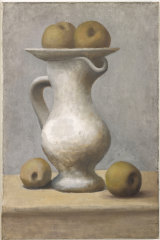 There are also two key portraits by Picasso: Large nude on a red chair (1929), and Reading (1932). The former is a savage portrayal of his wife, Olga Khokhlova, a former ballerina with the Ballet Russes. Picasso and Olga married in 1918, separated in 1935, but would never actually get divorced. The latter shows Marie-Thérèse Walter, with whom the artist began an affair in 1927, when she was 17 years old.

The contrast between the portrait of Olga, who looks like a carnivorous ghoul, and Marie-Thérèse, all curves and pastel colours, provides an insight into Picasso's state of mind during a period of extraordinary creativity that was more fully explored in Tate Modern's 2018 exhibition: Picasso 1932 – Love, Fame, Tragedy.

Picasso offers another insight into his love affairs in a Still Life of 1937, in which he allegedly appears in the form of a crab weighing up a couple of fish that stand for Marie-Thérèse and her successor, Dora Maar.

What distinguishes them from their peers was a lifelong ability to make dramatic shifts that left their imitators behind.

The fourth item from the Musée National Picasso is one of the supreme Matisse paintings in the show. Still life with oranges (1912) was a piece Picasso long admired and finally managed to acquire in 1942. It's a work in which Matisse gives full rein to his unique, unorthodox abilities with colour and composition. 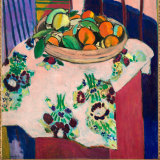 It's suggested in the catalogue that Matisse (1869-1954) and Picasso (1881-1973) had a "codependent" artistic relationship, but that's probably overstating the case. Although the two artists felt a mutual respect and admiration, and kept a wary eye on each other's latest moves, they would go for long periods without making contact. What distinguishes them from their peers was a lifelong ability to make dramatic shifts that left their imitators behind. 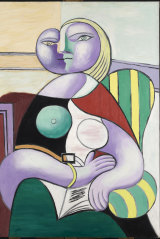 The period of maximum personal antagonism was probably the decade before the First World War, when each enjoyed a succès de scandale – Matisse for his vibrantly coloured fauve paintings, Picasso for his cubist works in which an object might be shown from many different angles simultaneously. Twin revolutionaries, they competed for the attention of the influential collectors, Leo and Gertrude Stein; and guarded their own doctrines with the same jealous rage that existed between the Bolsheviks and Mensheviks.

Kinsman emphasises the artists' shared love of Cézanne, and the striking contrast in their responses to his legacy. The show also spotlights the very different way each man handled commissions to design sets and costumes for the Ballets Russes. Picasso fell into the theatrical mode more naturally than his rival, but while Matisse's costumes may have been cumbersome, they were also astonishingly inventive. 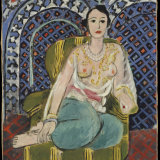 In the 1920s, when Matisse had moved to Nice and was painting orientalist fantasies such as Reclining odalisque and Seated odalisque (both 1926) he described Picasso as "a bandit waiting in ambush", thinking the Spaniard would soon be producing his own harem scenes. These fears proved largely unfounded. It was only after Matisse's death in 1954 that Picasso would throw himself into a series of oriental-themed paintings, which acted as a homage to his late friend and rival, albeit via the works of Delacroix – another shared passion.

It has been argued that the quality of Picasso's work went into decline after Matisse's death, as if for want of vital competition. This perception was also fuelled by the rise of abstract art, which began to dominate the market in the late 1950s and early 1960s. Picasso's dogged attachment to figuration was viewed as a form of artistic senility, while the abstract qualities of Matisse's work were more in tune with the temper of the times.

If Picasso's late works are no longer treated with derision it's partly because we have stopped seeing art in terms of a linear progress from figuration to abstraction, partly because he and Matisse have become icons whose smallest sketch is treasured. Whatever rivalry existed between these two giants has become a parlour game for art historians. Beethoven or Mozart? Tolstoy or Dostoevsky? Matisse or Picasso? There's really no need to choose.

Rachel Riley responds to trolls after they threaten to boycott her