Did you know self belief can make you rich? Do you want to make a six-figure income by the time you’re 25? Here’s how to make $$$ on crypto!

Messages like these proliferate on social media, promising endless wealth and the dream lifestyle. But how do you sort the valuable advice from the nonsense? And what happens if you take a gamble and it goes wrong?

Sarah Miller fell foul of a business coach she found on Instagram who ‘groomed and exploited’ her at a time when she was at her most vulnerable.

Falling under the influencer’s spell cost the single mum thousands of pounds and left her in debt.

It all began when Sarah split from her husband. She had been a successful account director at a marketing agency, but had stopped working when she fell pregnant to look after her two children. The divorce left her with nothing and she feared she would lose her home.

The 46-year-old writer from Surrey recalls: ‘I was in a very dark place. I was a nervous wreck and I was trying to rebuild my life. The stress of the divorce was making me ill. I had young children – aged one and four – and I couldn’t afford the childcare to go back into employment. I was completely stuck.

‘I started to work for myself, but I couldn’t earn the money I needed to pay the mortgage. Then I spotted these high-end coaches online.’

Intrigued by the idea of failsafe finance advice, Sarah connected with one money guru who promised her the world.

‘She started interacting with me a lot online, spending a lot of time on me,’ she recalls. ‘She was really supportive and positive, and would ring me to say that she thought I was amazing, that I had loads to give. She told me everything a person wants to hear; that I could do anything.’ 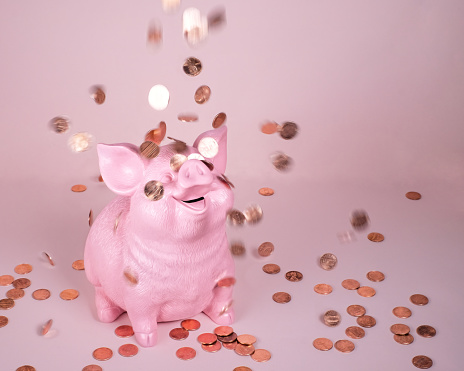 The coach told Sarah that if she truly wanted to be a success she needed to take part in her business course, but Sarah couldn’t afford the £6,000 fees.

‘She encouraged me to take out a credit card to pay for it – and if I did that, my life would change,’ remembers Sarah. ‘But I didn’t have that kind of money. I knew it would just push me further into debt.’

Even so, the coach was persuasive and eventually Sarah, who was so desperate for help, buckled and took out the credit card and paid for the course up front.

However, once signed up, she soon discovered that rather than receiving sensible business advice, the course involved meditation, breathing exercises and selling techniques.

Another task was to make video testimonials that the coach could put on her website. It seemed to be little more than a money-making venture for the coach, who told Sarah not to talk to others about the training.

‘It was just her just talking about what she was doing and basically telling us to hit up our friends or local people to get as clients,’ she recalls. ‘The mentor was teaching us to be salespeople, and that just didn’t resonate with me.

‘She basically manipulated me. The amount I spent on that course made me feel physically sick every single day. And it turned out to be as useless as a chocolate teapot.

‘She rang me one day and told me: “I’ve got an amazing opportunity for you. I’m doing a special coaching session in London. I’m going to let you join it for only £250. Everyone else is paying £1,000. But it’s tomorrow.”’

When Sarah told the coach she was unable to go at such short notice because she had kids, she was reprimanded and told she had the wrong mindset.

‘I emailed her, saying I was really frightened. I had given her all this money and now she was telling me that I wasn’t doing enough,’ says Sarah. ‘I didn’t know what to do. I had no-one to go to.’

By this point Sarah was half way through the course, and realised it was not delivering. She asked for her money back and was refused. She posted a review of the coach online, which was removed. She then made a complaint to the British Association for Counselling and Psychotherapy, which the coach had claimed to be accredited by. They replied that the coach was not in fact a member. The coach then blocked Sarah.

The only option she had left was to contact the small claims court, but already dealing with a divorce and two children, she didn’t have the capacity to fight. So she cut her losses. The coach, who has a glossy website and advertises across Twitter, Instagram and Facebook, is still operating today.

She swims in a sea of influencers promising to enhance your career or get you rich quick. But if you want to make informed decisions, where do you look?

FinTok – where users post personal finance and investment tips on TikTok – is awash with promises to help you make money. Influencers tell you how to trade stocks, how to make money from property and how affiliate marketing and content creation can make you wealthy. One video states: ‘Time to get rich is running out’, while another declares: ‘The world is facing rampant inflation. You need to get rich, and you need to get rich quick’.

New research by MoneySuperMarket found that social media platforms are the most widely used source for financial knowledge amongst 18-24 year olds. 55% said they use social media to find out how to apply for a loan or manage their finances. TikTok was revealed as the most popular source, followed by YouTube, Instagram and Twitter. So how can you tell who to trust?

Author and TikTok strategist Zoe Lea says that if something seems too good to be true, it usually is. She says: ‘As someone who is on TikTok daily in a professional capacity, I see lots of scams that are easy to fall prey to if you don’t know what red flags to look out for. Be vigilant where your personal and financial information is concerned and don’t click on links or open attachments if you’re unsure of the source.

‘Always check, then double check, the legitimacy of any account, by researching the official website off the platform and not in the app itself. Don’t get swept up in the hype of any “get rich quick” side hustles or schemes that ask for an investment and if someone messages you directly, don’t give away any personal information until you’re certain that it’s safe.’

TikTok is overflowing with financial advice, and the cost of living crisis is leaving young people vulnerable. Fake brand collaboration requests – or ‘DM to collab’ offers – trap users into buying products that don’t exist. And cryptocurrency scams proliferate. Kim Kardashian has just been fined £1.12m for advertising EthereumMax on her Instagram page.

Celebrity-endorsed crypto scams are soaring in the UK, according to Santander, with cases jumping 61% in the first three months of the year, compared to the previous quarter. And according to Barclays Bank, young people are the most vulnerable to scams, with twenty-somethings making up 29% of cases.

Sharon Davies, CEO of financial education charity Young Enterprise, says: ‘Given the financial pressures of the pandemic and increase in social media usage, young people are more vulnerable than ever to online scams. They are being drawn in by “get rich quick schemes” and the misconception that brands and figures with large social media followings must be credible.

‘Young people see their favourite celebrities and influencers appearing to promote opportunities to invest in these digital currencies which can result in them nursing big losses. Anyone can set themselves up as a finfluencer and this lack of regulation is dangerous.’

Sarah, however, had to learn the hard way. ‘If the coach hadn’t come along, I would have been okay,’ she insists. ‘She got into my head and got me into debt. I had just got myself sorted financially; I had a house, I was paying my bills. I could just about break even. But getting involved in that coaching pushed me over the edge. I was in such a mess. It was a nightmare.

‘The coach was absolutely ruthless. She emotionally manipulated me when I was at rock bottom. I can’t believe I let her get away with what she did.’

Sarah, who has written a book about her experiences, advises people to listen to their instinct before making any big decisions.

‘If it makes you feel anxious or stressed, do not do it. I was convinced and manipulated.

‘It is like letting the devil whisper sweet nothings into your ear,’ she adds. ‘If they are using trigger points to get you to do something, don’t do it. If you haven’t got the money, don’t do it.’

Where to get good advice

Financial expert Holly Mackay, CEO of Boring Money, says: ‘It’s amazing how many financial experts sprung up during the crypto boom, who have gone very quiet since. I think decent sources of good advice are the Government-funded website Money Helper; the BBC with programmes such as Moneybox, or national news personal finance pages. We also offer independent and plain-speaking money help and investment advice at Boring Money.

‘Financial advisers have to be registered with the Financial Conduct Authority and you can check this register online. I think another key thing is to remember that no-one has a crystal ball and there is no such thing as a free lunch. Look out for anyone making promises, offering guarantees or offering something which feels too good to be true. Good money management is generally a bit more boring than this!

Think about the “risk free” rate of return. This is the interest rate on your cash. If someone is promising returns which vastly exceed this – how? The only way you can get this, is to take risk. And the higher the potential returns, the higher the risk. This is always true so listen to your inner voice of doubt.’