Home » Lifestyle » Texts: Single woman's Italian landlord is eager to get her a boyfriend

Single woman shares amusing texts from her ‘tiny Italian landlord’ who is desperate to find her a boyfriend: ‘You need to learn a to make a good risotto’

A single woman has shared the amusing text message exchange with her well-meaning Italian landlord who is on a mission to find her a boyfriend.

In a Reddit thread Emily shared a screenshot of the entertaining messages she received from the man, who lives upstairs in their shared home, one evening after 7.30pm.

The nosey landlord asked about a male guest she had visiting before suggesting she learns to make ‘a good pasta’ in order to ‘find a boyfriend, get married and get out of the basement’.

‘My tiny Italian landlord strikes again,’ Emily captioned the image along with a smiling, crying emoji. 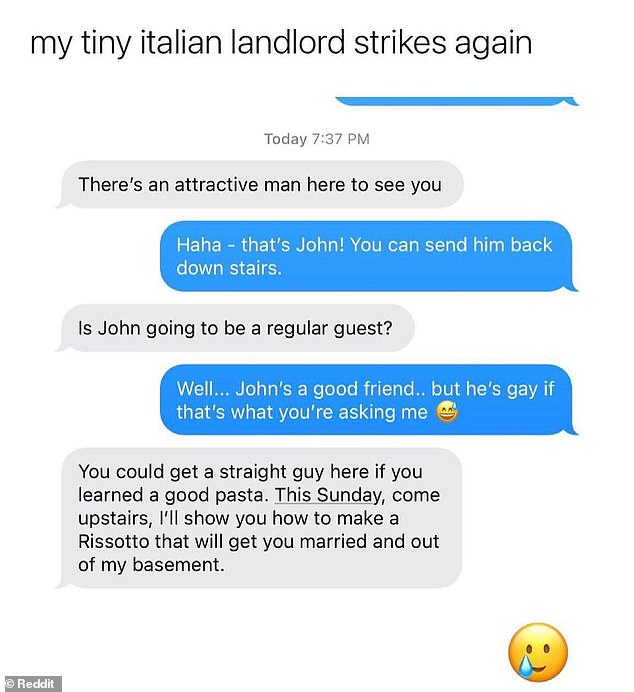 ‘There’s an attractive man here to see you,’ the text began, before she responded with ‘Haha – that’s John! You can send him back down stairs’.’

She was asked suggestively if John would be ‘regular guest’ before she informed the landlord that he was in fact gay and a good friend.

The landlord responded: ‘You could get a straight guy here if you learned a good pasta. This Sunday, come upstairs, I’ll show you how to make a Rissotto [sic] then you will get married and out of my basement.’

Hundreds left amused comments on the thread, with many joking that a good risotto is certainly the secret to a long-lasting relationship.

‘Don’t underestimate the power of a good risotto,’ one person wrote, another added: ‘It’s what I cooked the first time my fiancé came over to my house. Totally sealed the deal.’

A third wrote: ‘I cooked shrimp risotto for my girlfriend very early on in our relationship. I’m pretty sure it’s one of the reasons she let me stick around.’

In response to those who believed it was an inappropriate exchange, one said it isn’t a ‘bad’ thing the landlord is helping out with Emily’s dating life.

‘I don’t understand why the people see the bad thing, I find it wholesome. I bet the landlord is a elderly person who just want to be nice,’ one person added.

Rick's exit from The Walking Dead was a massive cop-out

FYI, That Arie/Becca Reunion She Mysteriously Teased Earlier This Year Isn’t Making It to TV