Home » Lifestyle » The passionate work that challenges you to feel something

“I want the audience to be moved – to feel something. Life has become so sanitised,” says legendary choreographer Meryl Tankard, speaking about her latest work, an ambitious creation called Kairos.

Conceived during COVID-19 lockdowns, Kairos will receive its world premiere on Thursday as part of Sydney Festival. 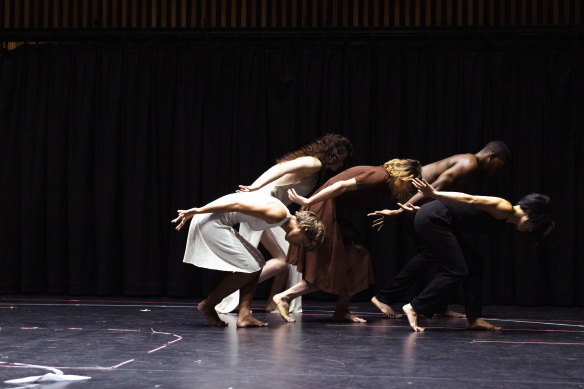 Kairos depicts humans and their role in an increasingly fractured natural world.Credit:Dominic Lorrimer

Kairos began as a series of workshops two years ago in Bundanon, the former home of Arthur Boyd on the NSW South Coast, which has an extensive collection of Australian art.

“I found these huge, big portraits that Sidney Nolan had done with an airbrush that were quite unusual, quite different from anything else that I’d seen,” says Tankard. “I gave the dancers these portraits and said could you create a dance from this and they all started to get very inspired.”

From those simple beginnings emerged a 60-minute, collaborative work that encompasses “the dark and challenging; the ugly and beautiful; the humorous and joyful” and depicts humans and their role in an increasingly fractured natural world.

Along with visual artist Régis Lansac, Tankard has been joined on the project by long-time collaborator, composer Elena Kats-Chernin. Most notably, the pair worked together in 2003 on the ballet Wild Swans.

“It’s wonderful to be back with her,” says Tankard. “It’s quite rare to have that great connection with another artist where you just know what each other wants.”

Kairos is a Greek word that translates as “the right time” or “most opportune moment”. Tankard says it describes perfectly the stop-start nature of making work during COVID.

“I felt that, you know, that’s what we were doing, we were just grabbing that opportunity and taking it – getting as much out of that little time we had,” she says.

The dancers are accompanied live on piano by Kats-Chernin along with projections from Lansac. The result, says Tankard, is an intense experience.

“The dancers and Elena give so much of themselves on stage,” she says. “I think the audience will feel that commitment from them and hopefully be touched by this generous spirit.”

‘This is it’: Indiana Jones steals the show at Disney’s dazzling expo