Home » Lifestyle » ‘This is it’: Indiana Jones steals the show at Disney’s dazzling expo

Tens of thousands of fans came to hear about the future of Star Wars, but ultimately it was the beloved pulp hero Indiana Jones – alias actor Harrison Ford – who stole the show at the annual Disney-powered fan convention D23 Expo in Anaheim, California.

Ford appeared on the event’s main stage with the film’s director James Mangold and his new co-star, British actress Phoebe Waller-Bridge, before introducing a sneak preview of the planned fifth Indiana Jones film. Disney has not released the clip online. 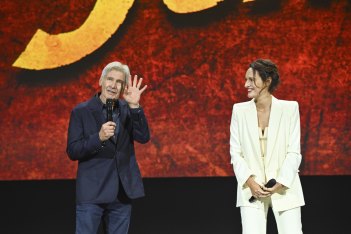 Harrison Ford and Phoebe Waller-Bridge at D23 in Anaheim, California.Credit:Disney

The 80-year-old actor who shot to fame as smuggler Han Solo in the original Star Wars trilogy, fought back tears as he addressed the crowd. “Thank you for making these films such an incredible experience for all of us,” Ford said.

“Indiana Jones movies are about fantasy and mystery, but they’re also about heart,” Ford said. “We have a really good story to tell, as well as a movie that will kick your ass.”

Ford gave Waller-Bridge high praise for her work on the film, which is due out next June. “The film is fantastic, and [Phoebe] is one of the reasons,” he said.

Ford also confirmed it would be his last performance as Indiana Jones. “This is it,” he said. “This is it. I will not fall down for you again. But thank you so much.“ 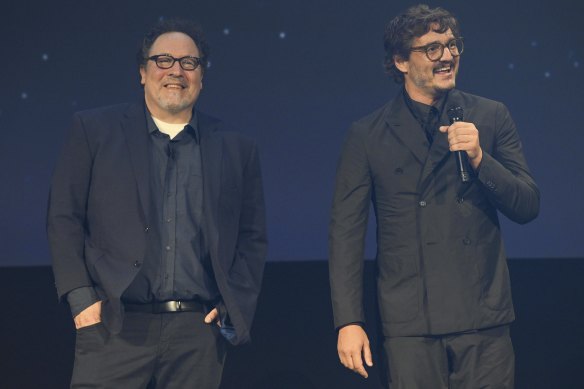 Writer/producer Jon Favreau and star Pedro Pascal from The Mandalorian at D23.Credit:Disney

Ford’s appearance at the convention, which will push more than 100,000 fans of Star Wars, Marvel and other Disney-owned films and franchises through its turnstiles across the weekend, was part of a combined panel focused on Lucasfilm and Marvel.

During the panel, Kennedy was joined by Star Wars story creatives Jon Favreau and Dave Filoni, and the trio introduced the highly anticipated trailer for the third season of The Mandalorian, as well as a sneak preview of another show, Tales of the Jedi, a series of standalone stories about Jedi knights Ahsoka Tano and Count Dooku, alias Darth Tyranus.

The third season of The Mandalorian is expected to follow bounty hunter Din Djarin (Pedro Pascal) as he regains his honour as a Mandalorian, the famed soldier cult within the Star Wars canon. (He lost his honour by removing his helmet, a breach of the Mandalorian code.)

Favreau also revealed the first look at Jude Law in costume in another upcoming Star Wars television series, Skeleton Crew. But it was a still image only, and not video from the series, which is set in the same post-original trilogy era as The Mandalorian. 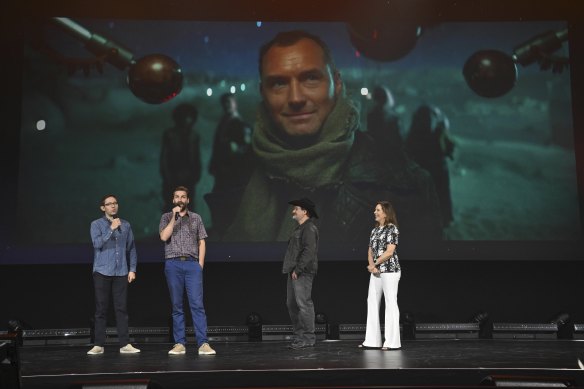 But in an unexpected footnote, Lucasfilm was curiously quiet about the future of the Star Wars franchise in cinemas. Fans had expected updates on the planned but still untitled Taika Waititi film, and the planned Rogue Squadron film from Wonder Woman director Patty Jenkins. It appears that in the short term at least, the Star Wars focus will be on content created for the streaming platform Disney+.

Disney’s partner studio 20th Century Fox also revealed a first look at director James Cameron’s long-awaited Avatar: The Way of Water, with an extended 3D sequence from the film. As with much of what is revealed at D23, the footage was not released online.

The Star Wars and Marvel panel followed a blockbuster opening panel for the convention, in which Disney showed a 30-second teaser for the live action adaptation of the studio’s most famous film, the 1937 animated classic Snow White and the Seven Dwarfs. A scene of actress Gal Gadot as the Evil Queen speaking the film’s most famous line, “magic mirror on the wall, who is the fairest one of all?“, was met with rapturous applause.

Disney also unveiled trailers or sneak previews for Hocus Pocus 2, which is released on Disney+ on September 30, a planned sequel to Disenchanted, a new Peter Pan film, Peter Pan and Wendy, starring Jude Law as Captain Hook, a Lion King film, Mufasa, which tells the origin story of Simba’s father, and the live-action adaptation of another animated classic, The Little Mermaid.

Marvel, notably, brought its A-game to the event, particularly when you consider the studio had already announced a ton of new content at Comic-Con in San Diego earlier this year.

The new announcements included a Halloween-themed special, Werewolf by Night, a trailer for Secret Invasion, which focuses on Nick Fury (Samuel L. Jackson) and a look at the title art for Armor Wars, which will feature Don Cheadle as Tony Stark’s best friend Rhodey, alias War Machine and later Iron Patriot.

D23 is staged at the Los Angeles convention centre, not unlike Sydney’s showground – with emphasis on the 7000-seat Hall D23 and two other arenas, the 3000-seat “premiere” stage and the 1200-seat “backlot” stage. All three sites will host panels, screenings and meet-the-star events across the three-day weekend. 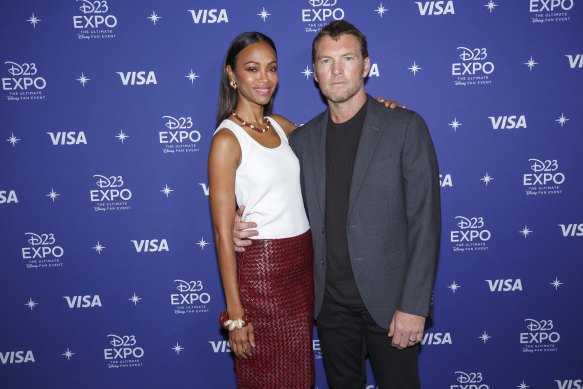 Within the convention centre, the “D23 Expo Emporium” – roughly the equivalent of Comic-Con’s convention trading floor – is where vendors sell Disney-licensed merchandise, such as costumes, clothes, games and toys. There is also a “cosplay” competition, the “Mousequerade”, hosted by the drag queen Nina West.

And while the “emporium” conjures images of 1980s-era convention floors where bootleg toys could be found in side alleys, the modern collectible economy is more rigidly managed, with calculated shortfalls intended to drive up value.

At this year’s D23, among the “exclusive” offerings are a Citizen wristwatch in a stormtrooper design for US$295, a Star Wars baby blankie from Milk Snob for US$39.99 and a Boba Fett “figpin” for US$20. If you’re not up to speed, a “figpin” is a small action figure/pin hybrid, which you can stick on your I Came To D23 And All I Got Was This Lousy T-Shirt T-shirt.

On the higher end? A beautifully manufactured Obi-Wan Kenobi lightsaber set, eaturing the three different lightsaber hilts used by the legendary Jedi knight in the Star Wars movies. But with a hefty price tag of US$550, it is no toy.

Line of Duty boss hints AC-12 trio will face death beyond season 6, warning ‘there’s a sword hanging over all of them’