Australia and the United States have signed an agreement to measure the economic value of nature, as they look to make environmental damage a top consideration for businesses and governments.

The joint pact was announced at the COP15 summit, a global biodiversity meeting that will determine the future of global nature protection and conservation. 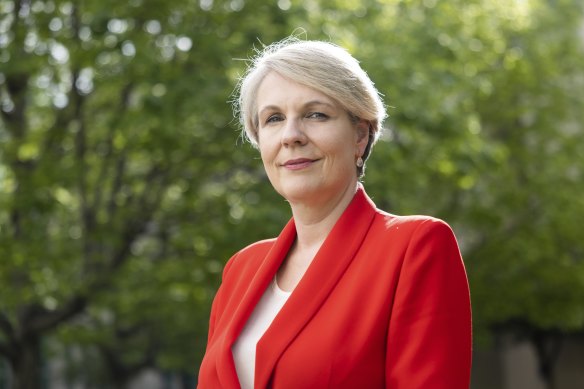 Environment and Water Minister Tanya Plibersek has signed an agreement with the US that will result in the two countries working together to put a price on nature.Credit:Alex Ellinghausen.

Federal Environment Minister Tanya and Independent Senator David Pocock were among an Australian delegation to fly to Montreal, Canada, ahead of the weekend, when some of the biggest decisions will be made.

“If we get this right, the work by Australia and the US could be adopted worldwide,” Plibersek said. “We rightly value nature for its environmental and climate benefits, and for its beauty. Yet we’re not as good at valuing the contribution of nature to our economy, jobs, or wellbeing.”

“People around the world rely on nature for their livelihoods. So it doesn’t make sense that our economy doesn’t properly recognise the dollar value of nature. It should.”

The two countries will work together to ensure that “natural capital” – which measures the amount, condition and economic contribution of nature to jobs and wellbeing – is applied to business decisions. The pact will also ensure that data is collected to inform decision-making and understand how the economy and nature interact, as well as increase so-called nature-based solutions, which will include planting mangroves to better understand how they combat climate change and improve human health.

Australia is working on how this approach to natural capital will be factored into the economy, while the US has set a goal of including natural capital in its national accounts by 2030. This decision is just one of many that are likely to emerge in the coming days from the COP15 summit.

Here’s everything you need to know about the summit and how it’s gone so far:

COP15 is the United Nations Biodiversity Conference that will last for two weeks in freezing Montreal. It started earlier this month and will conclude this weekend. On the agenda, governments will work to develop and adopt a new global biodiversity framework, called the Post-2020 Global Biodiversity Framework.

Countries have been working for two years on this framework.

This COP is different from COP27 earlier this year in Egypt, which was focused on climate change mitigation and adaptation.

What is the biodiversity framework?

The draft framework includes 21 targets for 2030. These include:

How has the conference gone so far?

It’s a mixed bag. Earlier this week, delegates from developing countries were locked in a stalemate with developed nations, as the former walked away from negotiations that focused on how to pay for the protection of the world’s ecosystems. While there’s been some improvement, Australian Conservation Foundation chief executive officer Kelly O’Shanassy – who is at the summit – says she isn’t too hopeful with what she’s seen.

“We’re sitting in rooms and there are [are a lot] of square brackets for things that aren’t agreed to and people keep adding new stuff in. There’s arguing on things that were previously agreed to. It’s really messy,” she says. “They want to end extinction is still square brackets, protecting 30 per cent land and oceans by 2030 [is still in square brackets]. If it fails, there will be a lot of repercussions for countries.”

But she’s hoping the arrival of environmental ministers this weekend will move things along. O’Shanassy says the natural capital announcement on Friday was a step in the right direction.

“Businesses use nature because it is valuable, but nature is being damaged because businesses tend to think of it as free. Valuing nature is important,” she says.

She adds that businesses needed to assess, disclose and reduce their exposure to nature-related risks and shift away from activities that destroy nature and towards activities that protect it and restore it.

“Valuing nature will help governments and businesses track and rebuild natural capital. Right now, nature is in rapid decline. It’s worth keeping in mind not all of nature can be economically measured. You can’t put a dollar value on hundred-year-old tree hollows or million-year-old wetlands. But these places and the species they house should still be protected.”

Rachel Lowry, WWF Australia’s chief conservation officer, says while people are aware this summit will determine the future of nature and biodiversity, their common goal seems to have fallen victim to different political views.

“Negotiations have been painstakingly slow. Whilst the pace is frustrating given negotiations leading up to this event have been taking place for two years, it’s the lowering of ambition that can’t be tolerated. There’s recognition from many that this has to be our moment to turn things around, but the key sticking point seems to be who is going to foot the bill,” she says.

“The stakes are high at COP15 because protecting nature is about so much more than protecting wildlife and wild places; it’s about protecting the functions that clean our air, purify our water – and ultimately ensuring a future where people and nature can thrive.

“Put simply, we can’t address the climate crisis without addressing the biodiversity crisis. The two are inextricably linked.”

There’s been a range of people attending the summit over the past two weeks, but this weekend will see the global environment ministers descend on Montreal.

Pocock said Australia needs to do a lot more to protect its declining biodiversity. “Australia is one of just a handful of megadiverse countries but our amazing landscapes and wildlife are under huge pressure. We have an opportunity to turn things around and better look after them,” he said.

“I see this as an opportunity to learn more about what’s happening in other places around the world.”

Plibersek has previously flagged she’d push for a global effort to prevent any new extinctions of wildlife by 2030, warning the world is heading down an “unsustainable” path unless the framework can be adopted.

“This conference in Montreal can really do for nature what the Paris Agreement did for climate change and carbon pollution reduction,” she said. “I think we need the same sort of recognition for nature that says what we’re doing at the moment is unsustainable. We’ve got to halt biodiversity loss and begin to repair nature.”

Most Viewed in Environment

Suspect in Christmas granny beatdown says NYCHA made him do it