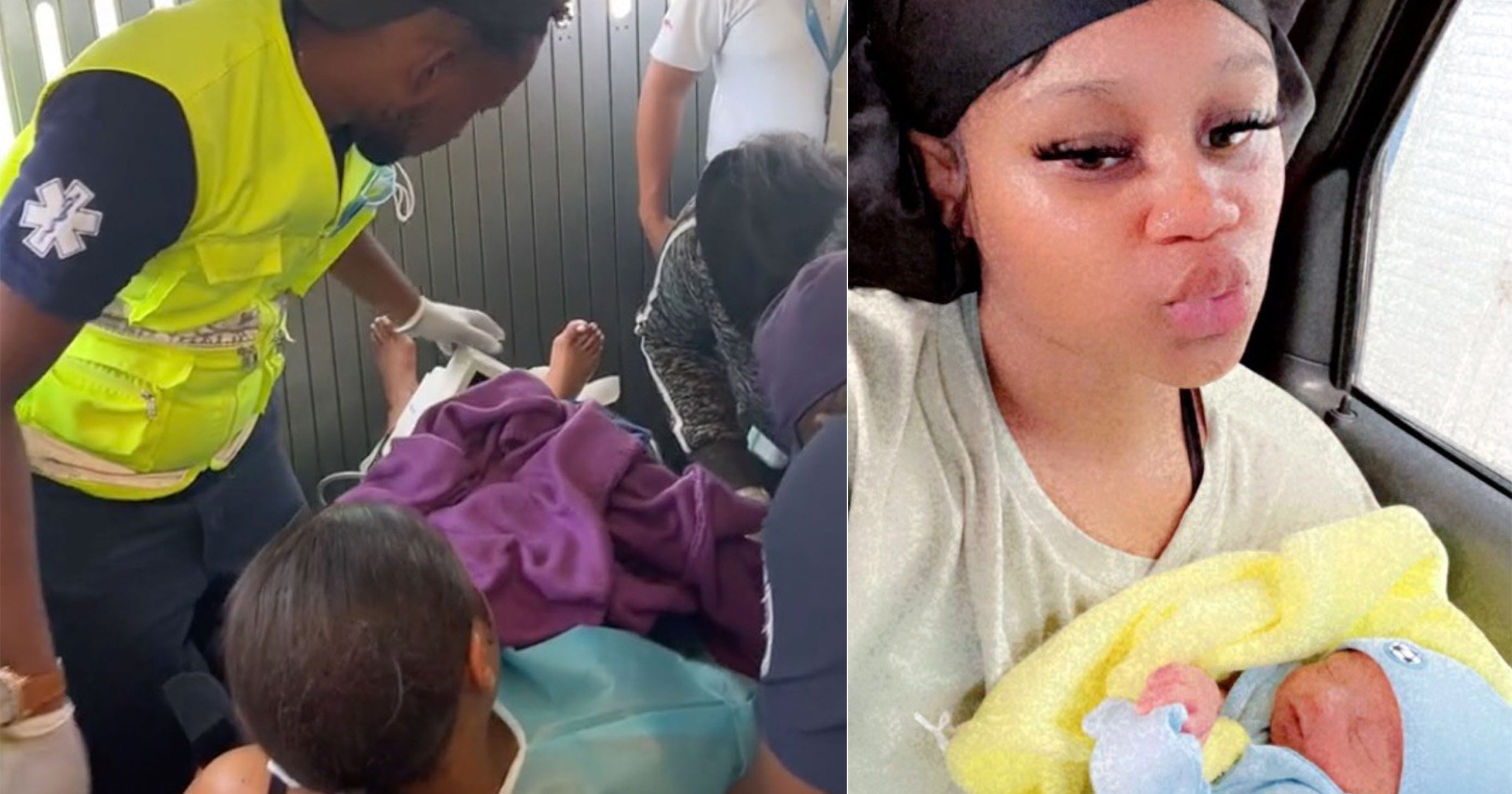 Passengers on a flight in the US were stunned when a woman gave birth at 36,000 feet.

And rather aptly, the tiny 3lb 7oz baby has been named Skylen Kavon-Air Francis, in honour of being born in the clouds.

His airborne delivery also meant that his mum, Kendria Rhoden, 21, wasn’t sure what nationality her son would be – and immediately had to get him a passport so he’d be able to travel home.

Kendria Rhoden a health care worker, from Hartford, Connecticut, had been cleared by her doctors to fly at 32 weeks.

Her baby was not due until the end of October and so she decided to take the American Airlines flight to the Dominican Republic for her mum’s birthday with her sister, Kendalee Rhoden.

‘I started feeling cramps at first, right at the beginning of the flight,’ Kendria recalled.

‘These carried on and 34 minutes into the flight my waters broke.’

Millions of people have been captivated by the extraordinary story after Kendria’s sister Kendalee shared footage from the flight showcasing the unexpected arrival.

Kendalee said: ‘Throughout the flight my sister had been twisting and turning and unable to get comfortable, she was in the aisle seat whilst I had the window seat.

‘We switched so she could have the wall to lean on and hopefully get some rest, but it didn’t help.

‘When we were about half an hour away from landing my sister grabbed me and said her water had broken, I was shocked.

‘I kept asking if she was sure until she stood up and the entire seat was drenched.

‘I immediately alerted my family and pressed the panic button and the flight attendants rushed over to the scene. Once we’d established her waters had broken and she was about to go into labour, an announcement was made to the rest of the plane.’

She continued: ‘The pilot was pleading for anyone with any medical experience to help, and thankfully there were four people who came to my sister’s aid.

‘She was taken to the back of the plane and after an extremely stressful 20 minutes, an announcement was made that we’d got a new passenger aboard, a beautiful baby boy named Skylen.’

Kendria added: ‘The cabin crew were such a big help and they had to deliver Skylen at the back of the plane.

‘I just remember everyone filming us when we were coming off the plane and they were all saying congratulations to me.’

Kendalee adds: ‘We’d received the all clear from Kendria’s doctors and the baby wasn’t due for another month, so it was a shock to all of us.

‘But what a miracle it was.’

Skylen, who was named in light of his birth story, had to spend four days in the neonatal intensive care unit following his premature arrival.

Because of his airborne birth, Kendria was uncertain about what nationality her new son would be. Once he was released from NICU, they attended the American embassy to sort the issue.

It was confirmed that Skylen is American, based on his mother’s nationality.

‘We weren’t sure what nationality he was at first, so we had to make an emergency trip to the embassy,’ Kendria said.

‘When I went there, they told me he’s an American citizen because of me, as I’m American too.

‘So, from there we had to get him an emergency passport so that we could get him home!’

Gemma Collins recalls being robbed and attacked before I'm A Celeb