A mother-of-two has given her home and wardrobe a 1950s revamp in a bid to ‘distract’ people from her disability.

Helen Brundrett, 40, from Manchester, was left unable to walk after the birth of her second child Arthur seven years ago, and was desperate to regain her confidence.

Also mother to Fraser, 10, Helen says embracing retro living has helped her find her own identity and feel she is being noticed for something other than her crutches or wheelchair.

Turning heads with her stunning vintage wardrobe – which includes traditional tea dresses, capri pants and waist-clinching belts – with her victory rolls and vampish red lipstick, she looks every inch the fifties starlet. 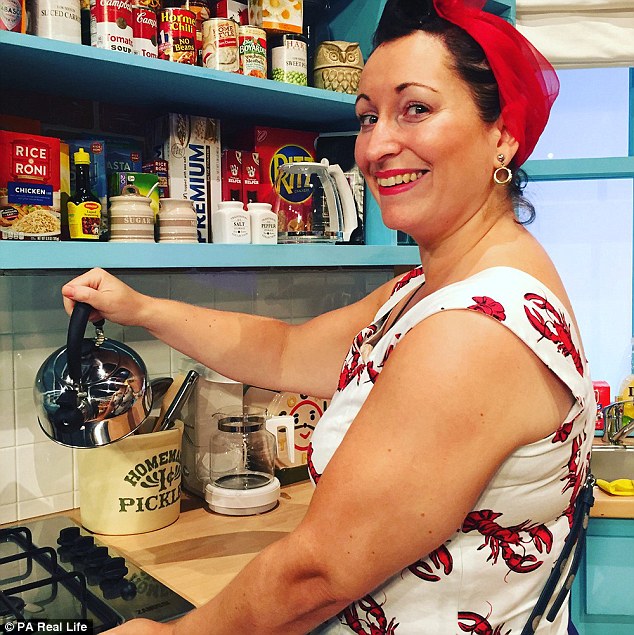 Helen Brundrett, 40, of Manchester, was determined to be noticed for more than her disability so she revamped her home and wardrobe to replicate the 1950s

Recalling her ordeal, Helen explained: ‘With Fraser I was fine, but with Arthur, I suffered terrible pelvic pain. I could barely walk, and would be dragging my legs, as I couldn’t lift my feet.

‘Eventually, I ended up bedridden and doctors said I had a condition called symphysis pubis dysfunction (SPD), where the pelvic joint becomes swollen and unstable.’

The full-time mother continued: ‘It was thought I’d get better after birth, but I never did. I tried to soldier on as best I could, but in the end I had to accept I couldn’t walk unaided anymore, suck it up and get a wheelchair.

‘Now, I need a wheelchair or crutches whenever I go out, so the way I dress is a way of distracting from that. I don’t want people to see my chair first – I want them to see my fabulous frock.’ 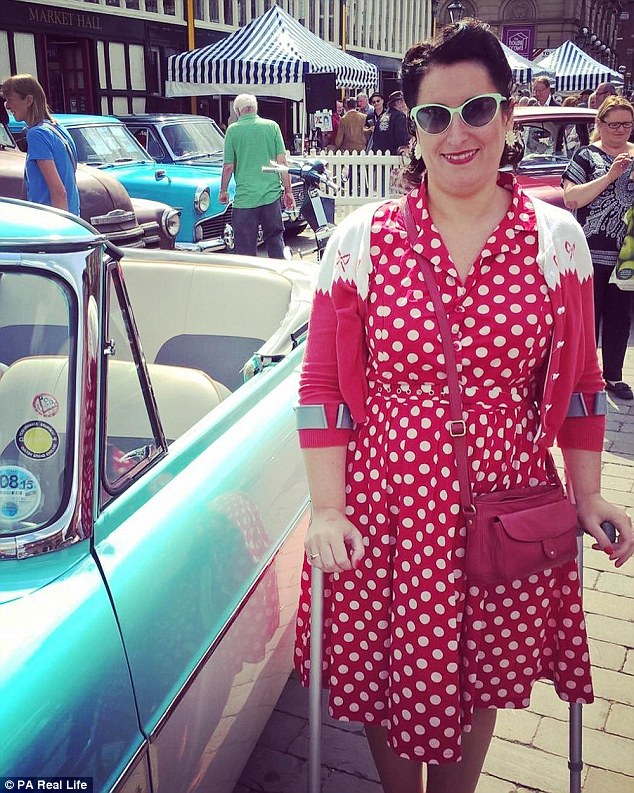 Helen was left unable to walk after the birth of her second child Arthur, now seven, and was desperate to regain her confidence so turned to vintage dressing  (seen with crutches) 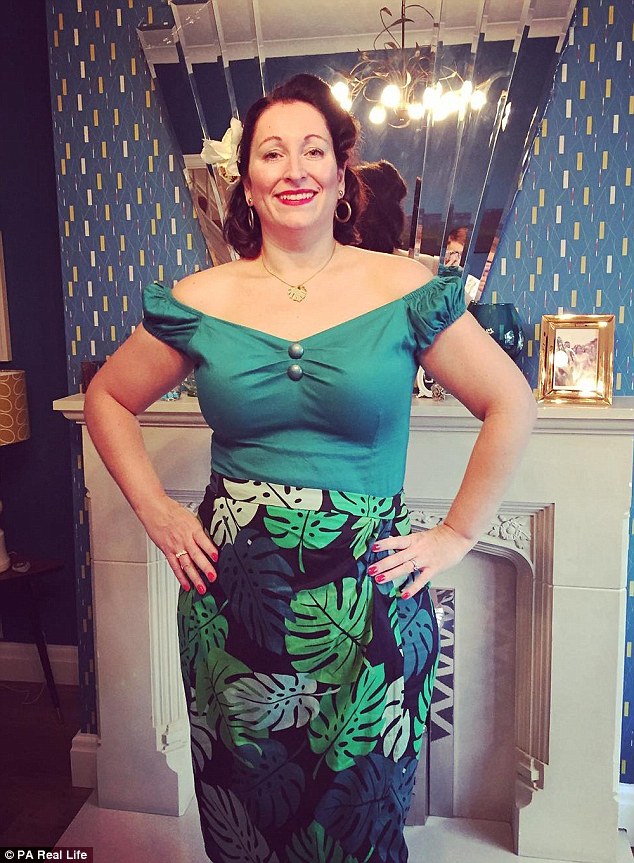 Also mother to Fraser, 10, Helen says embracing retro living has helped her find her own identity, seen wearing a bardot top and patterned skirt in her vintage-themed home

Growing up, Helen, whose husband, Mark, 44, works in children’s services, loved everything retro, from 1940s jazz to black and white films – although she lacked the confidence to adopt a vintage look.

But, around a year after having Arthur, her thinking changed.

She continued: ‘It was a combination of being older and a bit more confident, and the fact I felt I’d lost my identity a little. I think women can feel that anyway when they have kids, but I was also dealing with all these health problems on top.

‘I remember after getting my chair, I thought, ‘If this is me now, I might as well make the most of it.’

‘I finally bought a 1950s-style circle skirt I’d fallen in love with and it went from there. Gradually, I replaced all my old wardrobe.’

Now, Helen, who cannot work due to her condition, said she dresses up whenever she leaves the house, and trawls specialist online stores, vintage fairs and charity shops for her finds. 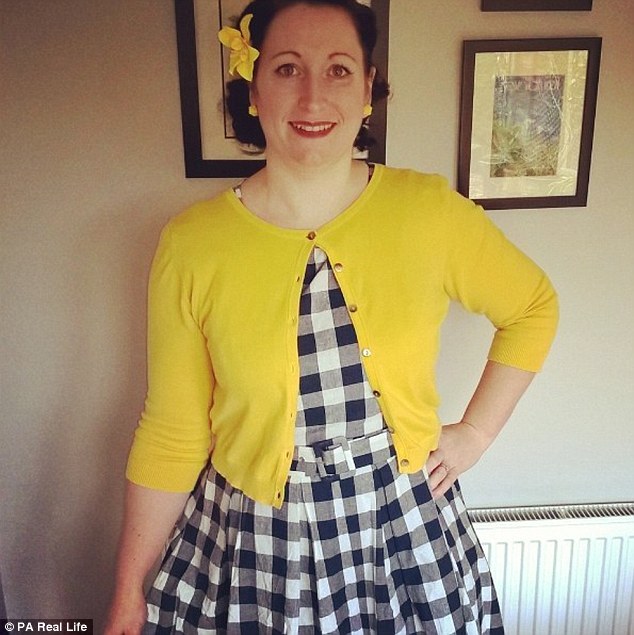 Turning heads with her stunning vintage get-ups – which include traditional tea dresses and vibrant prints, Helen feels she has finally found herself Helen teams many of her ensembles with waist-clinching belts victory rolls and vampish red lipstick, so she looks every inch the 50s starlet. 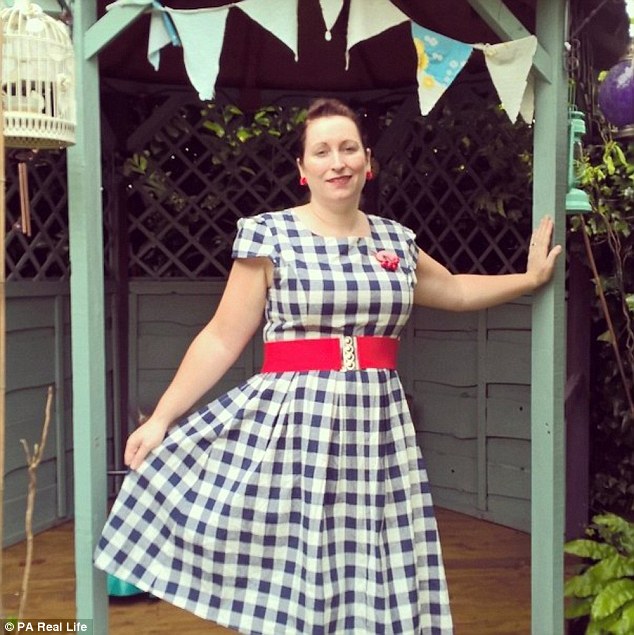 With her fabulous ensembles, Helen finally feels as though she is being noticed for something other than her crutches or wheelchair

She continued: ‘I don’t even like taking the bins out if I haven’t got my hair done. My husband always jokes about it, saying I can be too glamorous, but I don’t think there’s any such thing.

‘I can tone down my look and go 1950s casual, with capri pants and a tie up shirt, but I love doing the full victory rolls and red lipstick.

‘Now, I feel old and frumpy if I wear modern clothes. I had to get a long haul flight to New York recently and realised I didn’t own anything comfy to wear for it. I bought some joggers and a denim jacket, but just felt so odd in them. 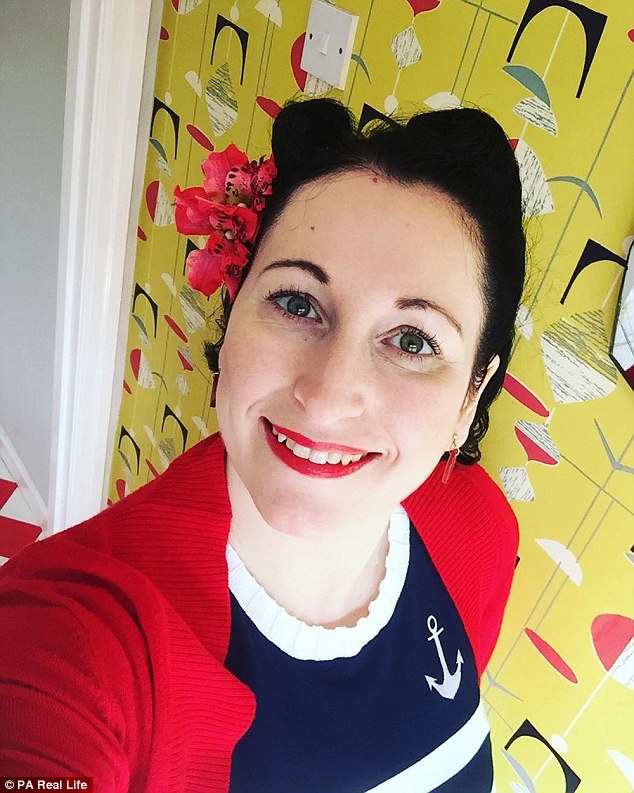 Growing up, Helen, whose husband, Mark, 44, works in children’s services, loved everything retro, from 1940s jazz to black and white films and she has finally channeled that 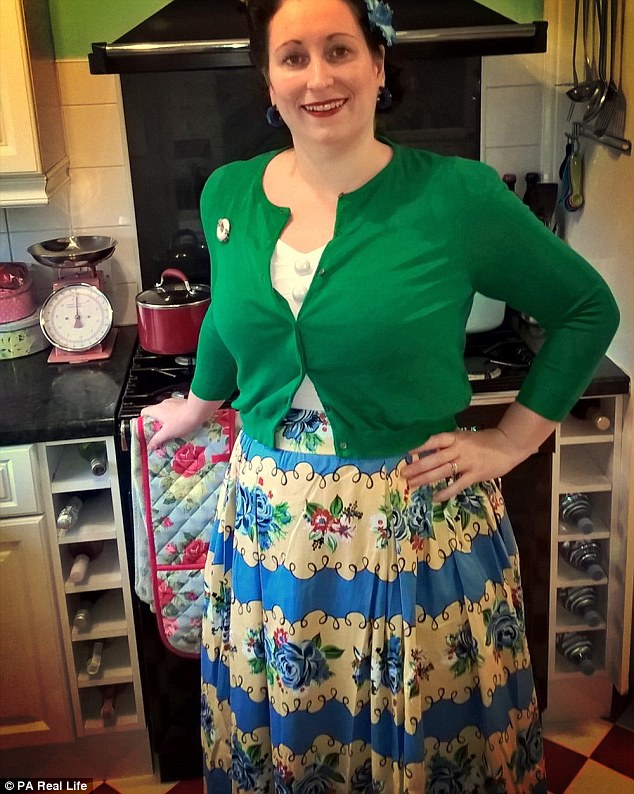 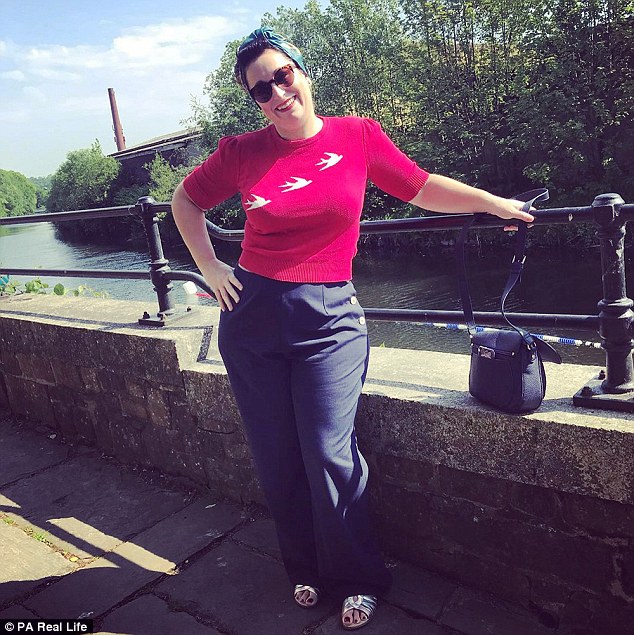 About a year after having Arthur, her thinking changed and she felt confident enough to start experimenting with her clothes and hairstyles

‘It’s like I’m in fancy dress if I wear anything normal.’

A dab hand at tracking down bargains, Helen manages to get a lot of her pieces for around £10 a pop.

She also estimates that not following high street trends has saved her money, as she is not replacing clothes every few months, as they go out of style.

As well as her wardrobe, she has also revamped her home – kitting out her kitchen, living room and breakfast room in retro décor.

And, while they do not dress up themselves, she said her family love living in a time warp. 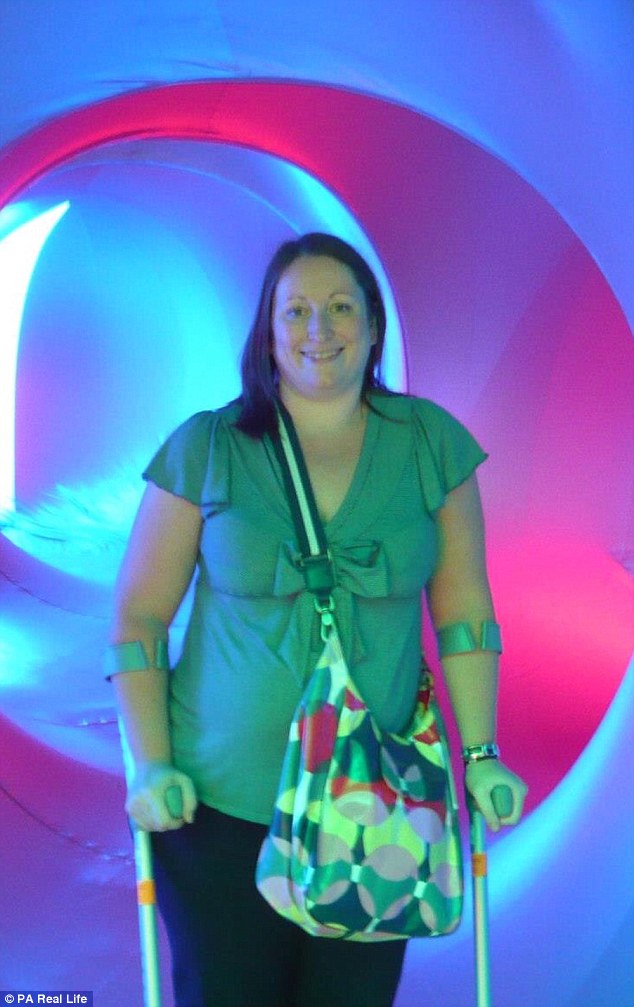 Helen, pictured here before her retro transformation, wore ‘safer’ options before but now she admits that she doesn’t feel confident when she wears ‘modern’ clothing 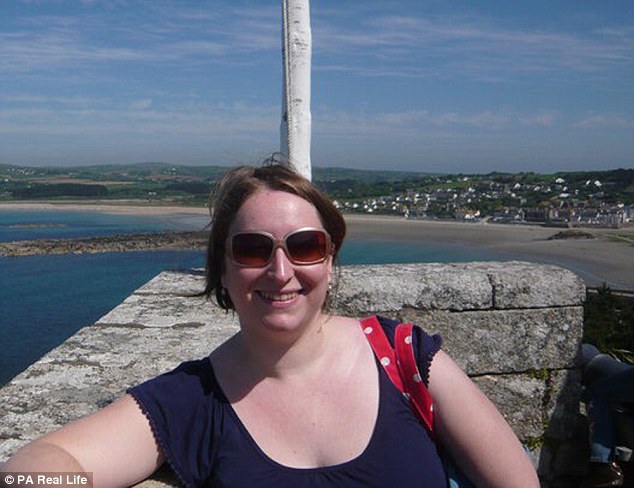 Helen is seen when she used to dress in modern clothing, before she had trouble walking

‘We all dress very differently, but they’re great at helping me pick things out,’ she said. ‘My boys will tell me they like the dresses I wear and my friends and family are always asking me if I want old furniture they’re chucking out.

‘A lot of the vintage touches throughout our house have been donated by loved ones, as they know I like anything with a story.’

Documenting her looks and lifestyle on social media, Helen has earned hundreds of online fans.

Meanwhile, reactions are just as positive in real life, with admiring strangers often stopping her to compliment her look. 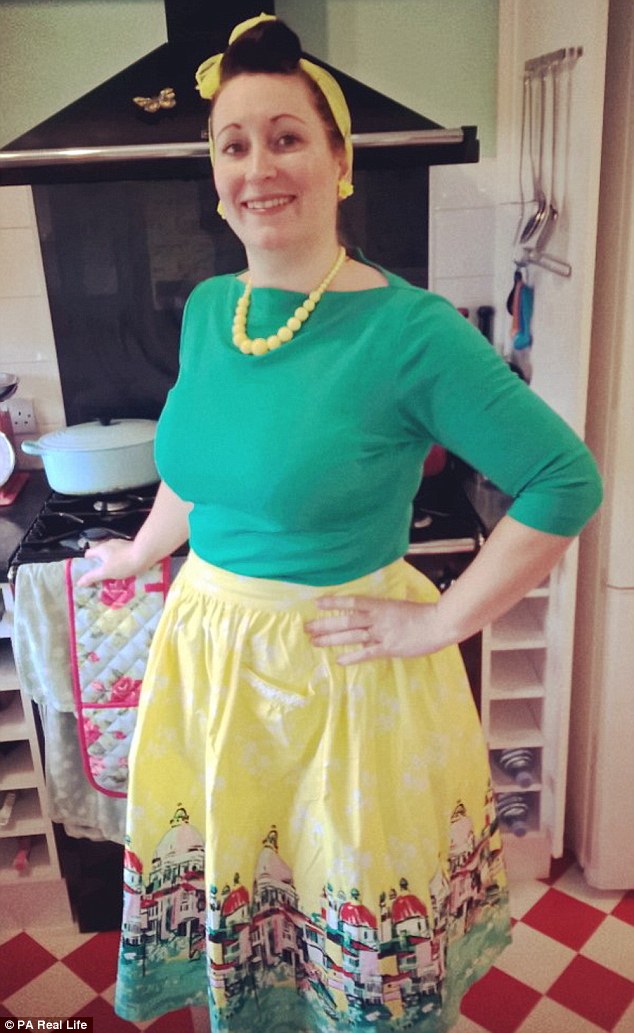 Helen said she receives compliments from admiring strangers on her look, especially from older generations 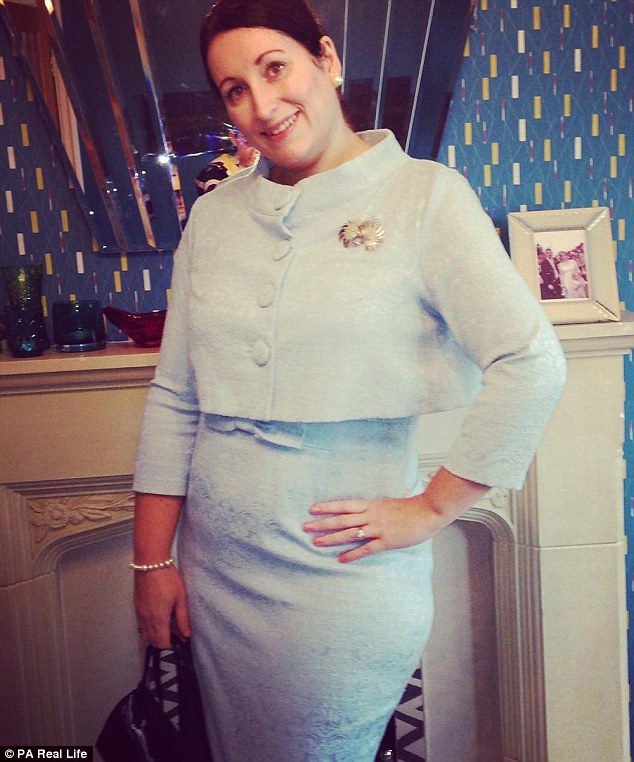 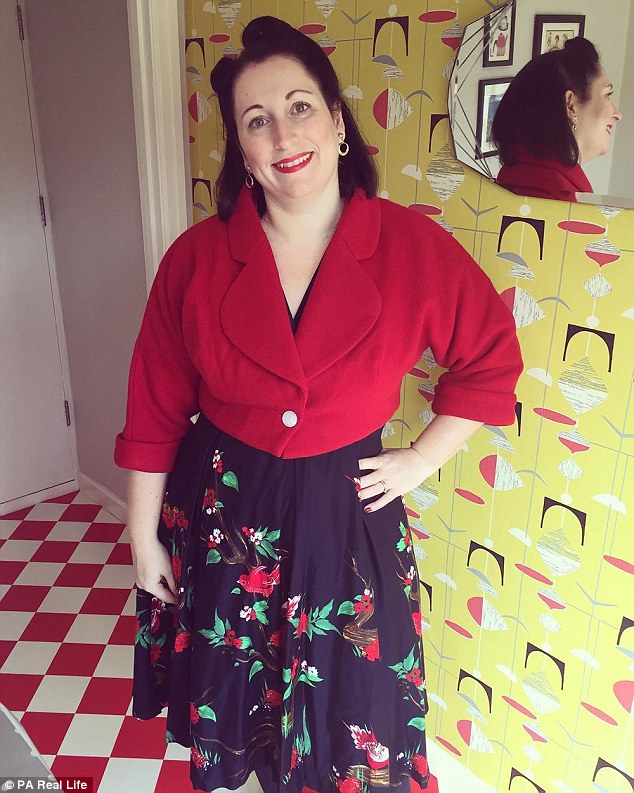 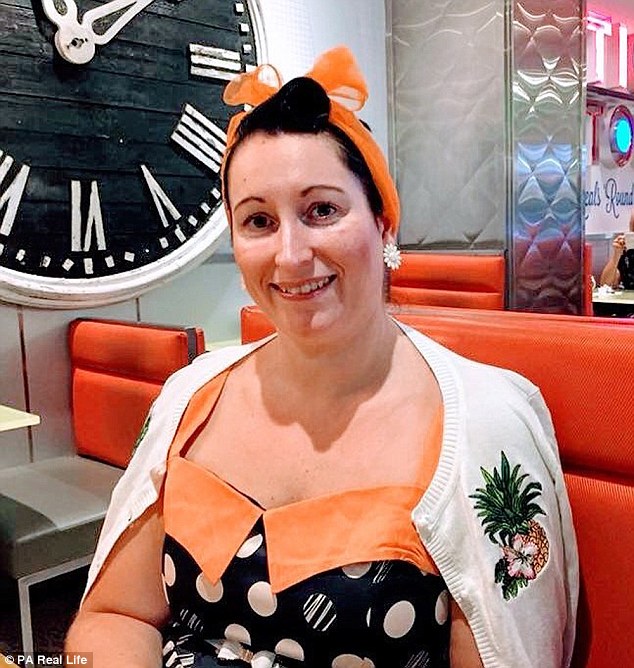 Helen, pictured here in a 1950s-style diner, looks right at home in her colour-coordinated ensemble

‘Sometimes I will worry before I’m about to walk into a room that people will thing I look strange,’ she said. ‘Some people don’t get it and don’t understand why I want to look like this.

‘But the older generation especially are really complimentary, as they remember the look the first time around.

‘I just love the 1950s look. It’s so glamorous and, if anything, I’d feel like I was in a costume if I wore anything else.’

Why Did Southern Charm's Thomas Ravenel Get Zero Jail Time After Pleading Guilty to Assault? An Expert Weighs in