With a colourful alien world, cheeky satirical story and heaps of potential for self-directed exploration, Journey to the Savage Planet promises a happier and more completable small-scale take on familiar first-person exploration ideas. And while it ends up becoming more of a low-budget version of Far Cry than the laid-back alternative it initially promises, it's still nice to get your fill of prodding and collecting in a big, charming world without all the trappings of a full-on bloated AAA offering.

This game was written and designed by the director of Far Cry 4, so it's no surprise that Savage Planet feels like a microcosmic version of some of the same ideas. This is a compact experience as far as first-person exploration games go, lasting at most 10 hours your first time through, and it plays something like a Far Cry game with all the meat removed and only the quirky side quests and distractions remaining. 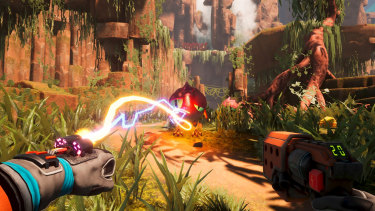 The planet is filled with adorable bird things you can shoot, punt, bait or explode to collect their tasty carbon.

That's not necessarily a bad thing mind you; I say this as someone who spends a lot more time in those games hunting for materials to craft item upgrades than I do following the story's main path.

Sent to an uncharted planet by Earth's fourth best intergalactic exploration company, your first goal is to scan every creature, plant and feature to complete your report, but you also have to solve the mystery of the massive and imposing building sprouting from the middle of this supposedly uninhabited rock. And since you were sent with nothing, you also need to figure out how to you'll eventually make your way back to Earth.

What makes the early game so appealing is the opportunity to discover and experiment at your (and potentially your partner's, as the whole game can be played co-operatively) leisure. You can ignore the objectives and suggestions to simply go off and explore; the world is littered with flora and fauna to scan, all with their own curiosities and flavour text, and although your offensive options are mostly limited to an energy pistol (and the back of your hand) there's a lot of hilarious variety to how you can interact with the planet's creatures.

You unlock greater traversal abilities over time Metroid style, cash in resources for better gear, and can usually spot some life-expanding orange goo just out of reach tempting you to make your way to it. There are also items like bait and portable bouncy pads you can use to tackle puzzles in whatever way you like. 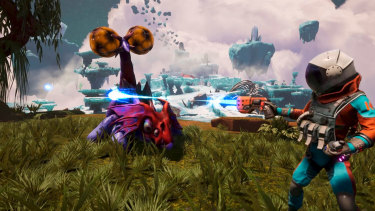 The whole game can be played with two players.

Still, while there's a lot of freedom in how you noodle around, the design's overall openness is something of an illusion and that becomes more apparent the further you progress.

You might have the option to continue searching for a particular resource or upgrade rather than heading back to your ship to progress the story, but in truth you would have had to go and do those things anyway. The back half of the game also funnels you more and more towards prescribed scenarios and combat, which had me longing for more of the early hours exploration and surprise.

This is a funny game, though it won't be to everyone's taste. There's a Starship Troopers vibe to the video messages from your employer, and a lot of the other media from Earth you can view in your ship is an effective but familiar kind of absurdist apocalyptic political commentary. The gags at the expense of Silicon Valley and the homogeneity of mega corporations speak to the designers' history in huge video game companies, though take on something of an ironic edge now the studio is technically a part of Google.

The funniest stuff is out in the world where, despite a preponderance of extremely juvenile poop jokes, slapstick interactions and clever writing frequently elicits a chuckle. I especially appreciate the sardonic quips of your AI companion, which are contextual enough to taunt you about dying while after a specific goal, or reassure you if you decide to ignore a main objective to go and scan stuff.

As much as I loved exploring this world and cataloguing all its weird and wonderful inhabitants, it was certainly a case of diminishing returns. Part of that was that I'd become accustomed to the world, but I also feel like the game couldn't help but fall back on the structures and tropes of open world shooters, even as it tried to reject those experiences to focus on the collecting and upgrading. Fighting things was my least favourite part of the game, but it becomes more and more central to your upgrade path as you go.

That said the brevity of the game helps gloss over those kinds of pacing issues, and smart additional objectives like the wacky scientific experiments means there's almost always something for you to do if you're trying to avoid the main mission.

Journey to the Savage Planet is out now for Xbox One (reviewed), PC and PS4.

Burglary at Ellen DeGeneres’ home was an ‘inside job’: authorities