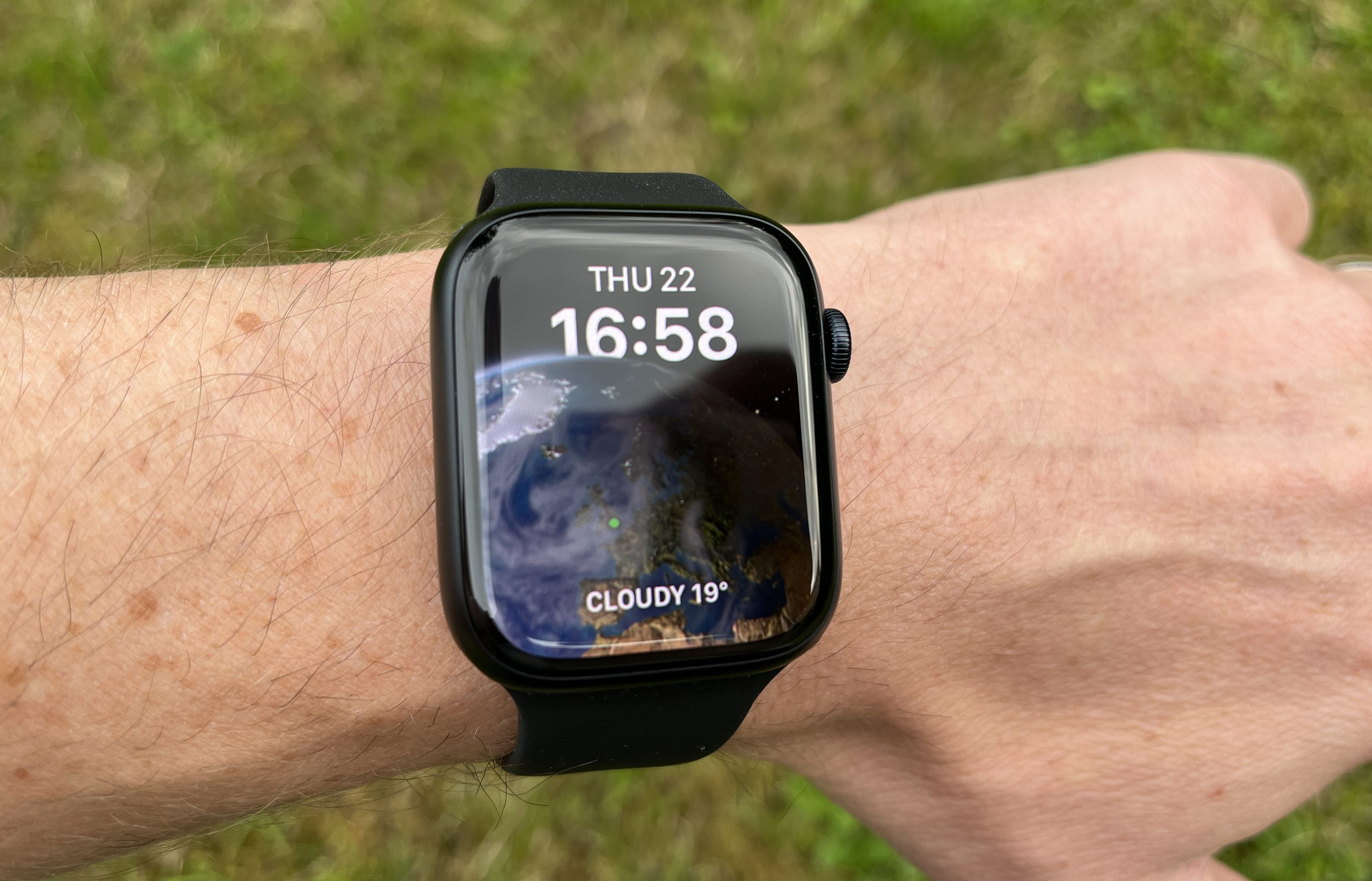 But that familiar exterior, available in a choice of seven different colours, hides a number of notable health and safety upgrades.

As with last year’s Apple Watch Series 7, the Series 8 comes in 41mm and 45mm sizings and a choice of aluminium or stainless steel for the case material.

The key differentiator this time around is the addition of a pair of temperature sensors; one on the back crystal and a second just under the display. If you wear the watch during the night it will sample your temperature every five seconds, picking up changes as small as 0.1°C.

It remains to be seen how app makers will put this new sensor into practice but Apple’s key takeaway is improved cycle tracking for women looking to conceive. The company says that cyclical patterns in temperature changes can reveal the biphasic shift, which is an increase in temperature that occurs in response to changing hormones after ovulation.

Therefore, the Series 8 is able to provide retrospective ovulation estimates using wrist temperature data. Even if, like me, you’re not capable of ovulation, you can still benefit from enhanced sleep data thanks to the temperature sensor.

The Series 8 arrives running watchOS 9 (which can also be installed on older models) and, as such, provides more information about how you pass the night. As well shifts in your baseline temperature, you’ll get other information, including how much time you spent in each stage (Light, Deep, REM) and when you might have woken up.

As well as putting a new temperature sensor in, Apple has improved the gyroscope and accelerometer motion sensors for the new safety features. Sadly for you, I haven’t been able to test the Crash Detection feature which lets the emergency services know you’ve been in a car accident.

Series 8 (as well as the new Apple Watch SE and Apple Watch Ultra) contain a new motion sensor with a high-g accelerometer that detects up to 256 g-forces (the Series 7 tops out at 32 g’s) and samples data 4x faster. If it detects you’ve been in an accident and you remain unresponsive, it will automatically connect you with first responders and notify your emergency contacts.

It bears pointing out that the new iPhones will do this as well – but if you’re wearing the Series 8 it will take precedent over the phone because it’s assumed the watch is more likely to stay on your person.

The other ‘new’ updates to the Series 8 are software-related, so if you’re a Series 7 or Series 6 owner, you’ll get the same benefits from just upgrading the OS.

To my mind, the most useful is Low Power Mode. This extends the standard 18 hours of battery life up to 36 hours on a single charge by disabling all non-essential processes (like the Always-On Display) to squeeze out as much power as possible.

That’s just over 36 hours worth of use between charges. Bear in mind that, during that time, I didn’t perform any workouts that required the use of battery-hungry features like workouts with GPS tracking.

Speaking of exercise, there has also been some improvements to the Workout app. Mostly, for running – which is my preferred exercise anyway. You’ll get to see more metrics, like vertical oscillation, stride length, and ground contact time.

There has also been some improvements to the Workout app. Mostly, for running – which is my preferred exercise anyway. You’ll get to see more metrics, like vertical oscillation, stride length, and ground contact time.

Apple has also added new ways to visualise them with Workout Views including Activity rings, Elevation and Running Power, and Splits. A new Multisport workout can automatically switch between swim, bike, and run for triathletes.

It’s likely that most wearers use their Apple Watches as a fitness device, so these updates are great. Although, as mentioned, they’re due to watchOS9 rather than any refinement specific to the Apple Watch Series 8.

So, where does that leave us with Apple’s newest wearable computer? If you’ve got an Apple Watch from the last two or three years then I can’t see any crucial reason to upgrade unless you’re thinking of starting a family.

Of course, just because it’s not an essential upgrade doesn’t mean the Series 8 is any less of a good product. If you don’t own a smartwatch yet then the Series 8 is absolutely the best device you can go for if you’re an iPhone user. It offers a more complete feature set than the SE and is considerably cheaper and more suited to everyday use than the Ultra.

To be critical for a second, I feel there are a few things Apple could have looked at with the Series 8. For example, the screen brightness remains at 1,000 nits – the same as the Series 7. Given that the Ultra can go up to 2,000 nits, it would have been great to see a bump for the Series 8.

Likewise, a storage increase up from the same 32GB as last year would have been nice given the base price increase. Upping the amount to 64GB would give wearers more space for songs, podcasts, apps and pictures.

The Series 8, while not as exciting as the Ultra or as affordable as the SE, should satisfy the most number of Apple Watch users who decide it’s time to upgrade.

It’s an excellent smartwatch, the most obvious choice for those in Apple’s ecosystem and a continuation of Apple’s dominance of the wearable market.

Where can I buy it? Direct from Apple here or over at Amazon here.