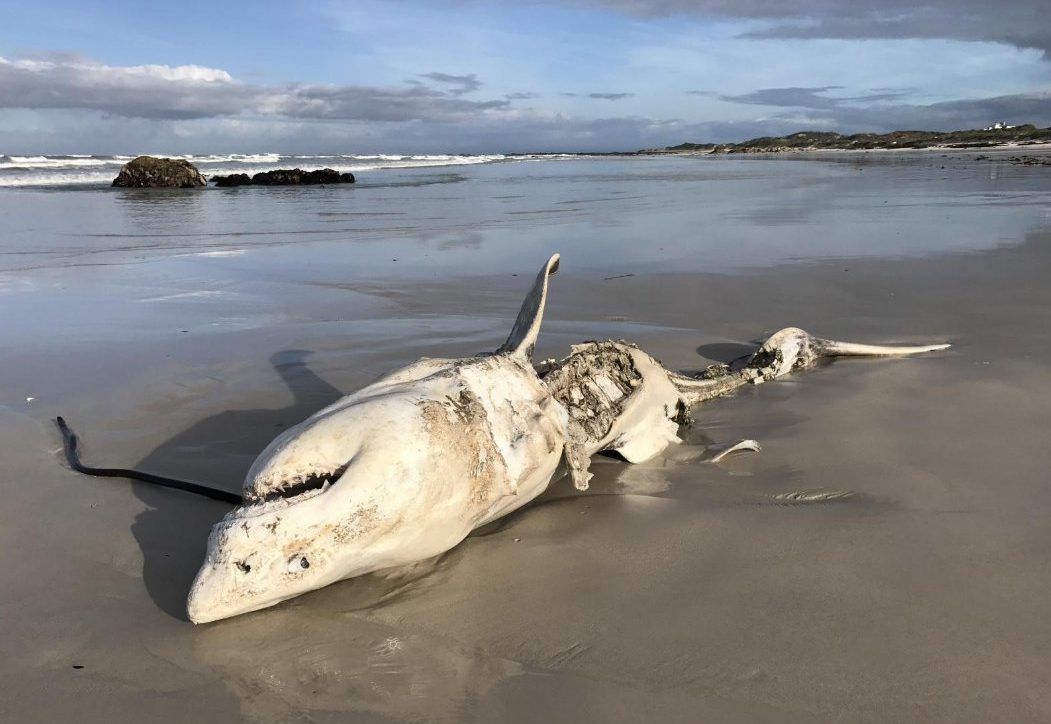 Orcas are hunting and eating great white sharks, ripping open their torsos to feast on their livers and hearts.

The killer whales are terrorising the apex predators off the coast of South Africa, sending them fleeing out of the area.

It’s the first time the gruesome attacks have been recorded – shedding fresh light on marine ecosystems.

And the findings have concerned scientists.

Lead author of the study, Alison Towner, said: ‘Initially, following an orca attack in Gansbaai, individual great white sharks did not appear for weeks or months.

‘What we seem to be witnessing though is a large-scale avoidance rather than a fine-scale strategy.

‘It mirrors what we see used by wild dogs in the Serengeti in Tanzania in response to increased lion presence.

‘The more the orcas frequent these sites, the longer the great white sharks stay away.’

Since 2017 eight great white sharks have washed up on shore – with the telltale bite marks of orcas.

Seven had their livers removed – and some their hearts too. The distinctive wounds were made by the same pair of orcas.

They are likely to have killed more – with those carcasses drifting to the ocean bed. Other orcas will also be capable of such attacks.

The discovery adds to evidence sharks use their ‘flight’ sense of fear to trigger a rapid, long-term emigration en masse when killer whales are nearby.

Orcas are the iconic great white’s only predator – apart from humans. They are at the top of the ocean food chain.

They can reach up to 30 feet in length and weigh over six tons – feeding on fish, squid, seals and sea birds. Great whites are up to 22 feet long and 2.5 tonnes.

‘By determining how large marine predators respond to risk, we can understand the dynamics of coexistence with other predator communities.

‘These dynamics may also dictate the interactions between competitors or intra-guild predator-prey relationship.’

The study in the African Journal of Marine Science, used long-term sightings and tagging data.

It shows orcas have scared great whites away from the Gansbaai coast – which they have dominated for years.

Over five-and-a-half years, 14 sharks were tracked fleeing the areas when the whales are present.

Tourists across the globe flocked to the site. Many took part in cage diving to see the legendary creatures up close in the wild.

Ms Towner, a senior biologist at the Dyer Island Conservation Trust off the southern tip of Africa, lives in Gansbaai.

She has studied great whites for the last 15 years – learning about their movement patterns through tagging data.

Regularly found on a boat and having witnessed many huge sharks, she describes it as ‘simply special, in terms of marine life – few places compare to this truly diverse and beautiful area.’

Prior to the attacks there were only two recorded instances in Gansbaai where they were absent for a week or more – one week in 2007 and three weeks in 2016.

What her team has recently witnessed first-hand – by physically retrieving the carcasses of attacked sharks – is unprecedented.

It’s changing the sea’s very ecosystem. She explained: ‘It’s triggered the emergence of a new mesopredator to the area, the Bronze Whaler Shark – which is known to be eaten by the great white shark.

‘These Bronze Whalers are also being attacked by the orcas too – who are indicating a level of experience and skill in hunting large sharks.

‘However, balance is crucial in marine ecosystems. For example, with no Great White Sharks restricting Cape Fur seal behaviour, the seals can predate on critically endangered African Penguins, or compete for the small pelagic fish they eat.

‘That’s a top -down impact. We also have ‘bottom up’ trophic pressures from extensive removal of molluscs which graze the kelp forests these species are all connected through.

‘To put it simply, although this is a hypothesis for now, there is only so much pressure an ecosystem can take, and the impacts of orcas removing sharks, are likely far wider-reaching.’

Orcas are easily recognisable by their distinctive collapsed dorsal fins. Other yet-to-be-published research suggests their presence is increasing in coastal regions of South Africa.

This pair might be members of a rare shark-eating group known to hunt at least three species as a prime source of nutrition in South Africa.

Ms Towner said: ‘This change in both top predators’ behaviour could be related to a decline in prey populations – including fishes and sharks – causing changes in their distribution pattern.

What it means for populations of the great white could be more pronounced – and it’s ‘unclear’ what the pressure may do.

‘Increased vigilance using citizen science – such as fishers’ reports and tourism vessels – as well as continued tracking studies will aid in collecting more information on how these predations may impact the long-term ecological balance in these complex coastal seascapes.’

Sea surface temperature can also have an impact on the great white’s recent absence.

But Ms Towner said the immediate and abrupt decline in sightings and extended increasing periods of absence cannot be explained by this.

She said: ‘Other potential explanations for a decline at Gansbaai could be direct fishing of great whites or the indirect effect of fishery-induced declines in potential prey.’

This could ‘potentially contribute to an overall decline in numbers of great whites in South Africa’ but is ‘unlikely to explain the sudden localised decline.’

Last year orcas were found to be hunting and eating the world’s largest animal – the blue whale.

They were seen teaming up to ram the beast’s flank – forcing it underwater. They even swim inside their giant prey’s mouth – chewing its tongue before it died.

An Australian team stumbled across the phenomenon during an annual survey off the Perth coast.

Blue whales are the largest creatures to ever live. They can reach up to 110 feet long and weigh 200 tons – as much as 33 elephants.

The number of sharks in open oceans has fallen by more than 70 percent – in just 50 years.

Three quarters of species are threatened with extinction – including the great white. Factors include climate change and overfishing.

‘The Young And The Restless’ Spoilers For Thurs. May 10: Abby And Hilary Battle & Ashley Is On To Kyle

The best Bluetooth wireless earbuds you can buy in 2020