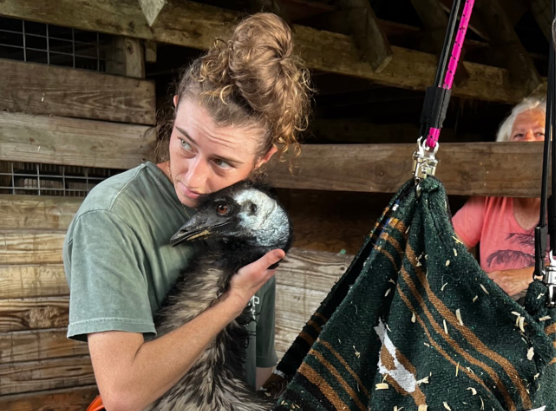 Turns out pet birds can be quite dramatic, especially those with over 2.4 million followers.

Last week, Emmanuel, TikTok’s favourite emu, was said to be fighting for his life amid a bird flu outbreak on his farm. His owner has now revealed that the bird never had avian flu but became ill from stress.

On Saturday, Taylor Blake, Emmanuel’s caretaker, announced on Twitter, that the emu had never contracted the virus.

‘Emmanuel Todd Lopez tested negative for Avian influenza at 2 separate labs, swab, fecal and blood. He does not have the virus, and is not actively shedding the virus,’ she tweeted on Saturday.

‘Thank you for the prayers, the kind words, and the support. Always trust your intuition!’

Blake went on to explain that the bird’s symptoms, which included fatigue, lack of appetite, weakness, a twisted neck and ‘apparent nerve damage’ in his right foot were stress-related.

‘We believe this all stemmed from stress. Emus are highly susceptible to stress. He was incredibly overwhelmed by the state coming in and euthanizing our flock. (Although it was necessary, it was still very stressful on him) He stopped eating the day they depopulated,’ she wrote.

Emmanuel became a viral sensation for interrupting Blake’s TikTok videos and attacking the phone while she was filming.

Blake had earlier announced that Emmanuel was battling a bird flu infection that killed more than 50 birds on the farm in just three days.

Emmanuel Todd Lopez tested negative for Avian Influenza at 2 separate labs, swab, fecal and blood. He does not have the virus, and is not actively shedding the virusðð» God is good! Thank you for the prayers, the kind words, and the support. Always trust your intuition!

She said that her family farm in South Florida was hit by avian flu brought in by wild geese.

The US had been affected by a record number of poultry deaths from bird flu due to a new virus type. More than 47 million birds have died due to infections and cullings.

Europe is already suffering its worst avian flu crisis, with nearly 50 million poultry culled and a bird flu ‘prevention zone’ declared over the UK to protect flocks from the disease.

How Many Viewers Ellen Has Lost Since Her Controversy

Horoscopes: Your horoscope for this week – what can you expect?