An Argentinian TV host has sparked disgust after appearing to celebrate the death of Queen Elizabeth II by popping open a bottle of champagne.

The Queen’s death was announced earlier this evening, with a statement from Buckingham Palace reading: ‘The Queen died peacefully at Balmoral this afternoon.

‘The King and The Queen Consort will remain at Balmoral this evening and will return to London tomorrow.’

While celebrities and politicians around the world have paid tribute as the nation mourns, journalist Santiago Cuneo appeared to celebrate the death of the Queen in a clip that has since gone viral.

In the video, which has since been taken offline, he calls her an ‘old woman’, before toasting her death. 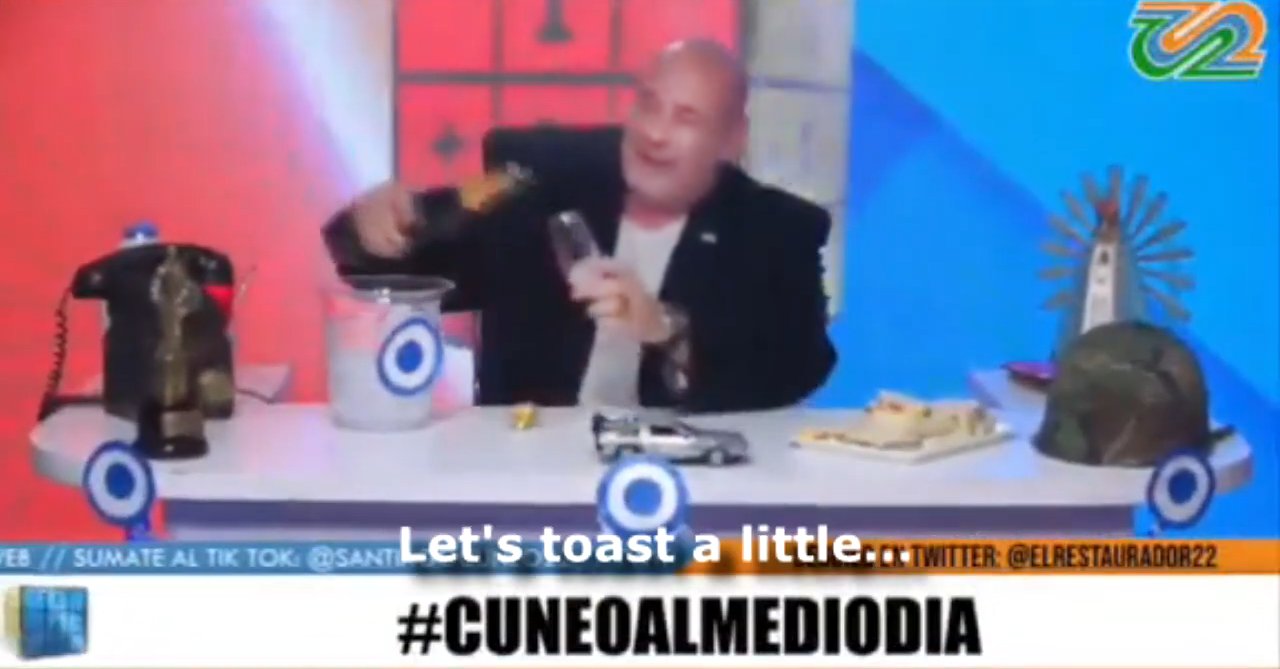 She died at the age of 96 surrounded by her family at her home in Balmoral, including her son and heir to the throne Charles, the Prince of Wales, and her grandsons, the Duke Of Cambridge, Prince William and the Duke of Sussex, Prince Harry.

Elsewhere, Cuneo said: ‘The right person has died,’ and ‘The old woman finally went to hell.’

Along with a picture of a bottle of champagne, he also shared on Twitter, translated from Spanish: ‘The old bag of s**t died!!!! Immense and eternal joy!!!’

The clip has sparked disgust across social media, with one person writing: ‘A disgrace, what a lack of respect! He may not like the monarchy but he could respect a deceased person. Apparently you have to be rude to gain an audience, what a sad world. If this man was a little smarter he would know that the queen has no political power.’

Cuneo, a politician and businessman as well as journalist, became known for hosting Uno Mas Uno Tres, that was broadcast from 2013 to 2018.

Someone else wrote: ‘What a horrible thing… how much bad taste.’

Elsewhere, heartfelt and emotional tributes have been paid to queen Elizabeth, with Paddington Bear tweeting: ‘Thank you Ma’am, for everything.’

Fans were incredibly moved by the post, with many being brought to tears.

‘Oh god, that’s the one that did it,’ replied one fan, while another echoed the same sentiment by posting: ‘I hadn’t cried until just now. I suspect I’m not alone.

Paddington’s tweet follows the likes of Sir Elton John, Stephen Fry and Dame Helen Mirren who paid tribute to the queen while newsreaders such as Huw Edwards were praised for somehow holding it together while announcing the news.

John described the Queen as an ‘inspiring presence’ and said he would ‘miss her dearly’.

‘Along with the rest of the nation, I am deeply saddened to hear the news of Her Majesty Queen Elizabeth’s passing,’ he wrote.

Malaysia in talks to evacuate its citizens from Wuhan: PM Mahathir