Carol Kirkwood, 57, was in the midst of beginning the forecast on BBC Breakfast when she was joined by puppet star, Hacker the dog.

Bouncing on to the screen, Hacker said: “Carol Kirkwood, what are you talking about? The weather again?”

Hacker went on to ask which presenters were in the studio, with Carol telling him it was Naga Munchetty, 44, and Charlie Stayt, 57, manning the fort at the BBC studios.

Taking a cheeky swipe at Charlie, Hacker quipped: “Hey Charlie, he’s a right Stayt. Whoops, it never gets old does it.”

Shocked at the remark, Carol cheekily scolded the guest: “That is terrible. You can’t say that about Charlie, even though it is his surname.”

After greeting the hosts back in the studio, Hacker went on to ask where Louise Minchin, 50, was.

“Where’s Louise? I didn’t want to Minchin her!” the guest quipped, before referencing Good Morning Britain star Susanna Reid, 48, who used to present the show.

“She still work there or has she jumped ship like Susanna did?” which led to Carol covering his mouth.

“Oh Hacker. Honestly, he’s nothing but trouble this dog,” she laughed. “He’s the kind of trouble we do like.”

But the puppet went on to take a swipe at sports reporter, Mike Bushell, 53. 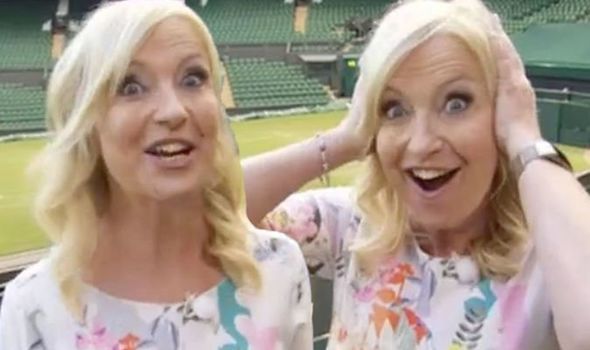 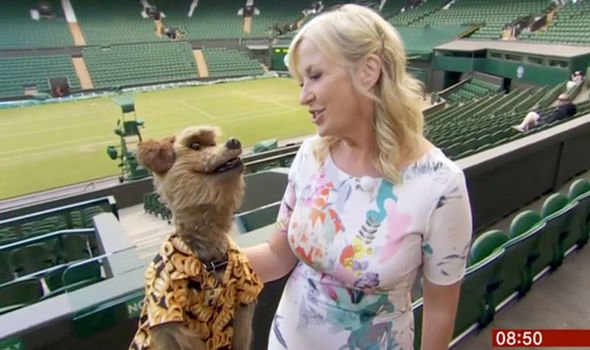 “I’m surprised they’ve let him in,” the puppet began. “Because he’s a bit weird isn’t he.”

Once again stepping in to scold the guest, Carol remarked: “No he’s not Hacker. Mike is lovely,” before the puppet then left the weather presenter to continue with her forecast.

Earlier on in the programme, it was Mike who found himself in a bit of a predicament when he was cut off during his report.

In the lead up to one of the links to the sport, Naga said: “Lots of sport happening this weekend. We’ve got the cricket, the football’s still going on and of course, Wimbledon as well this week.

“And that is where Mike is. Mike, you actually look like you’re squinting a little bit just because it’s so sunny and glorious this time in the morning.” 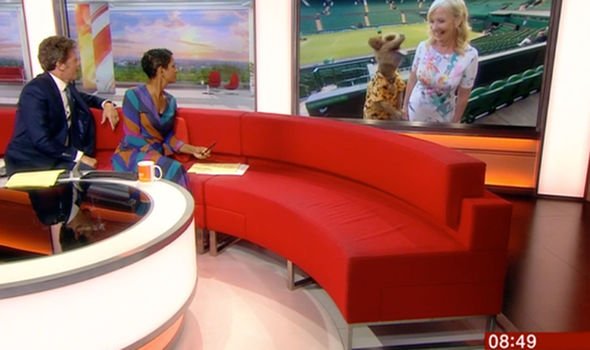 Seen on the other side of the court to the camera, Mike was surrounded by Wimbledon grounds people who were trying to prepare the courts for the fourth day of action.

As her tried to reply to Naga’s comments, Mike didn’t realise he was in the direct path of one of the staff who was trying to mow the fine grass of the courts.

“It is incredible, what half past seven?” Mike told Naga, before trying to continue his report but he was immediately cut off.

“I mean I’m nowhere… Oh sorry, I’m on air at the moment,” Mike told the staff member, as they continued past him to carry out their duties.

“So friendly the ground staff here. They keep saying hello. I did offer to give them a hand, but I think they’re ok, you know.”