FROM the first Big Brother in 2000 through to the steamy scenes of Love Island, reality TV has thrown people together for onscreen entertainment.

But Channel 5’s latest show The House of Extraordinary People, which sees nine men and women with unusual appearances living together for 10 days in a Yorkshire cottage, has caused controversy with some branding it a “latter day freak show.” 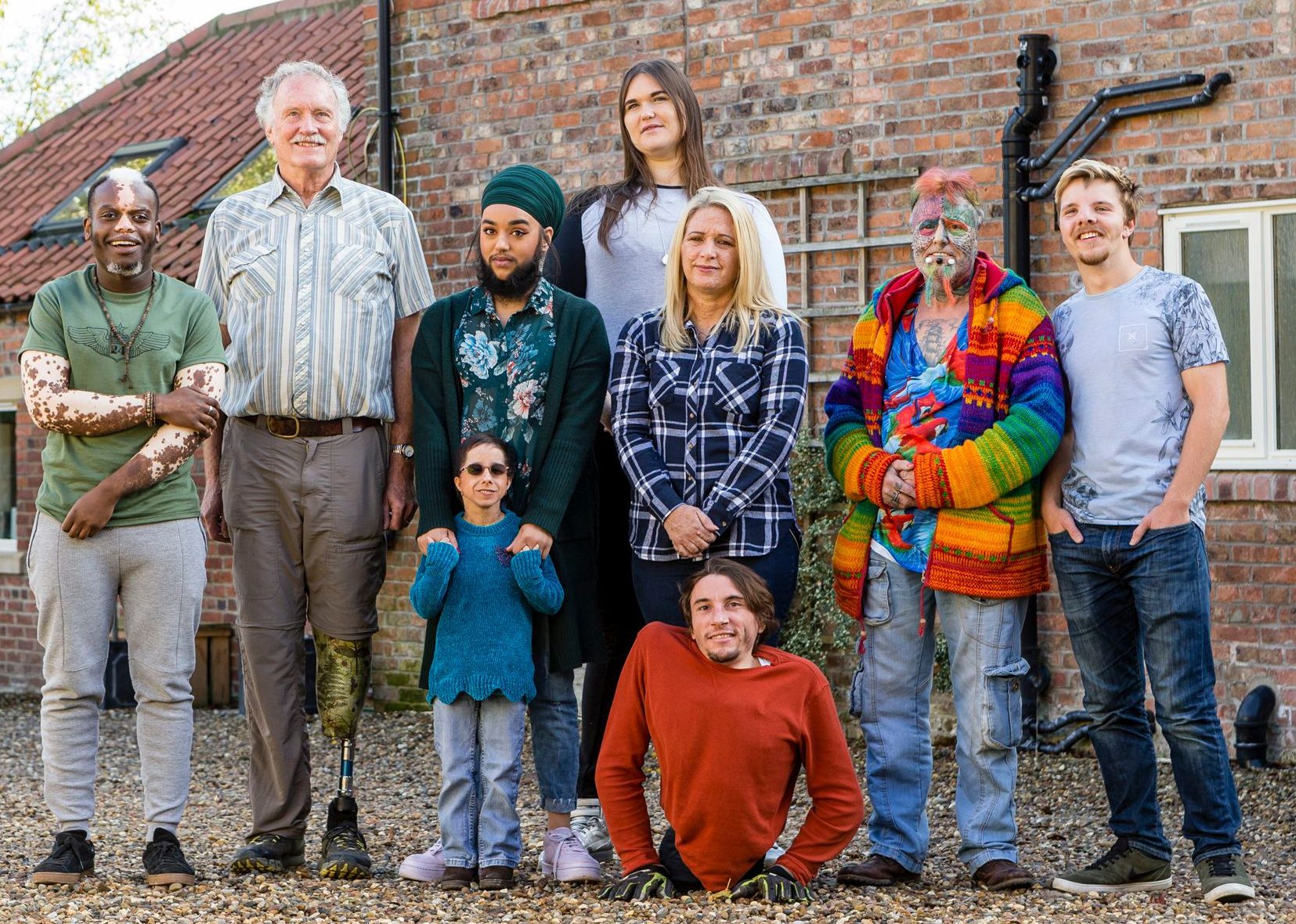 But 27-year-old Harnaam Kaur, who has a full beard as a result of polycystic ovary syndrome (PCOS), has slammed the critics as “disgusting” and “offensive.”

Harnaam stars in the show, which airs tonight, along with a man with no legs, another who is turning himself into a parrot through body modification, and a mum-of-four whose confidence has been destroyed by hundreds of tumours all over her face and body.

It’s being billed as a vehicle to “confront prejudices” and starts with the line: "This is no modern day freak show. This determined group of people are here to be heard."

“But there is a fine line to tread between insight and understanding, and voyeurism and exploitation.

“We hope that this programme is inclusive and gives disabled people a positive platform where the public can hear their voices, and gain a greater understanding of their lives." 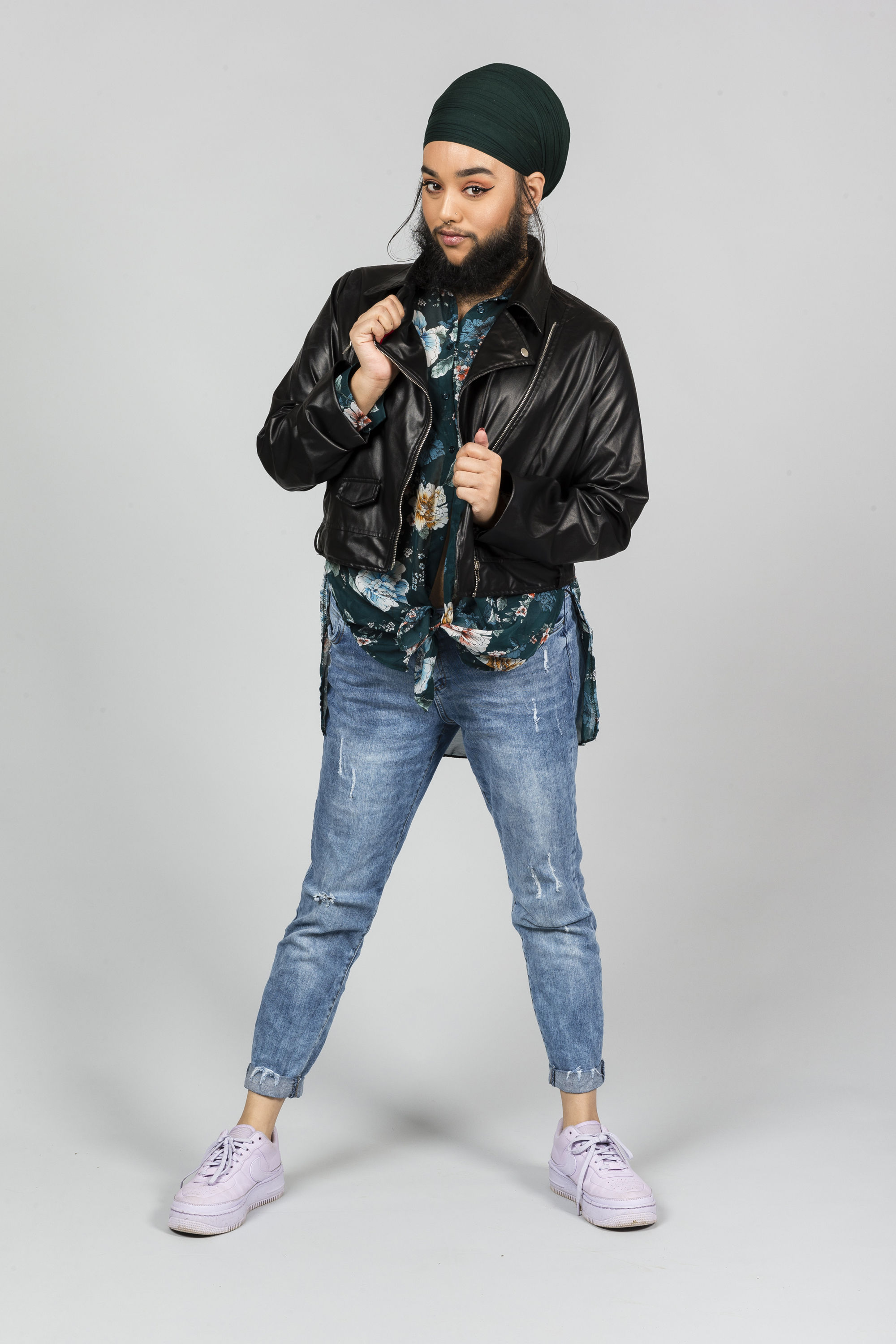 But motivational speaker Harnaam, who suffered horrendous bullying after growing facial hair at 11, says the show gives out a positive message.

She tells Sun Online: “Every time someone who looks different to the Eurocentric beauty standard is on TV they are labelled as ‘freaks’ and it’s disgusting.

“There are shows out there that are so fake but this show is real and can help people who are marginalised.

“It’s 100 per cent positive and it’s going to help a lot of people so it’s horrendous that people are calling it a freak show. It’s offensive and degrading.” 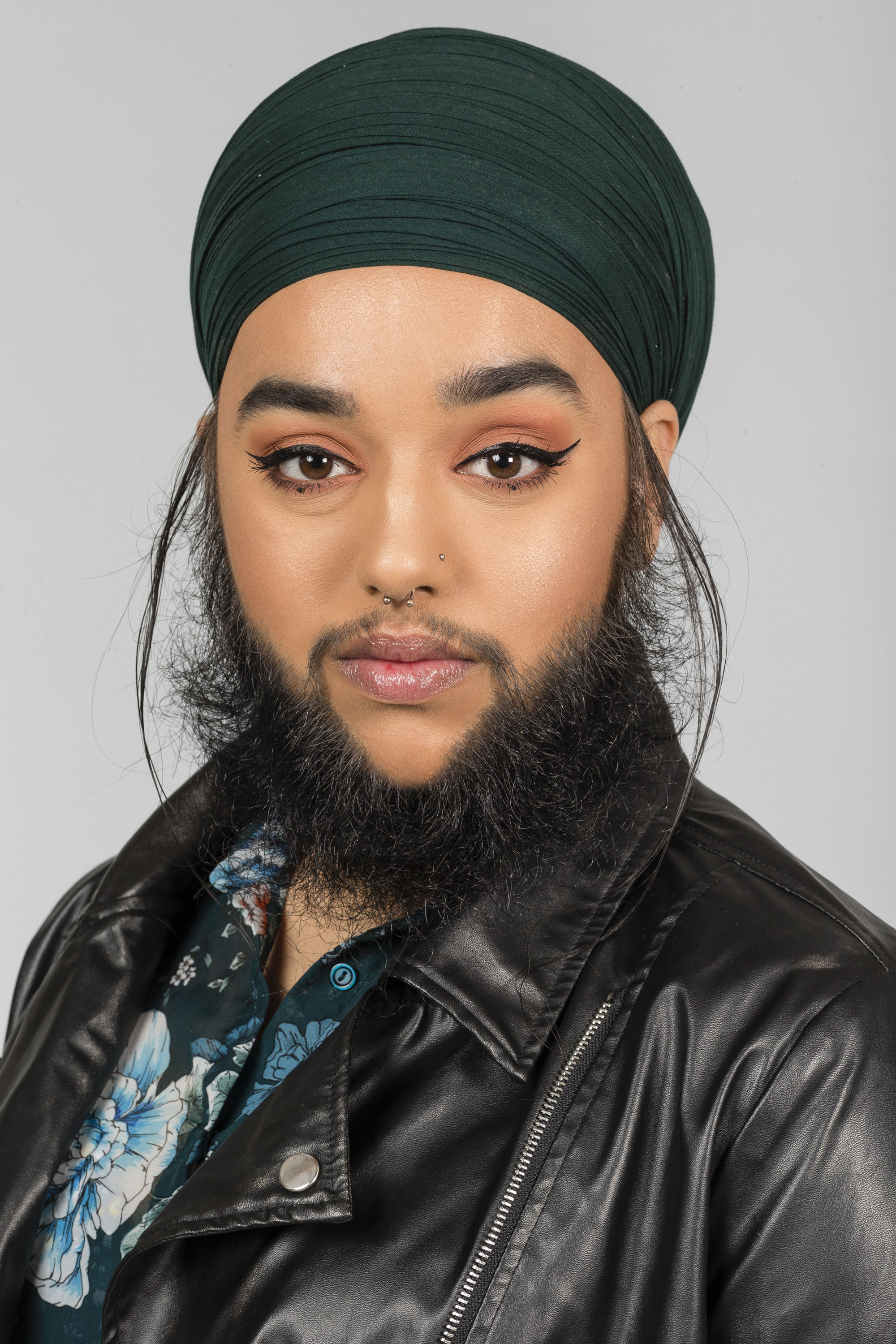 I was suicidal by the end of secondary school

The brave social media star first noticed her excess hair in year 6 and, shaved and waxed her face throughout her teens to get rid of it.

She said: “I didn’t know I had facial hair until some boys at my school said ‘0h my God she’s got a moustache.’

“I hit puberty, started my periods and went through really horrendous pain. I was diagnosed with the condition PCOS at the age of 11 or 12.” 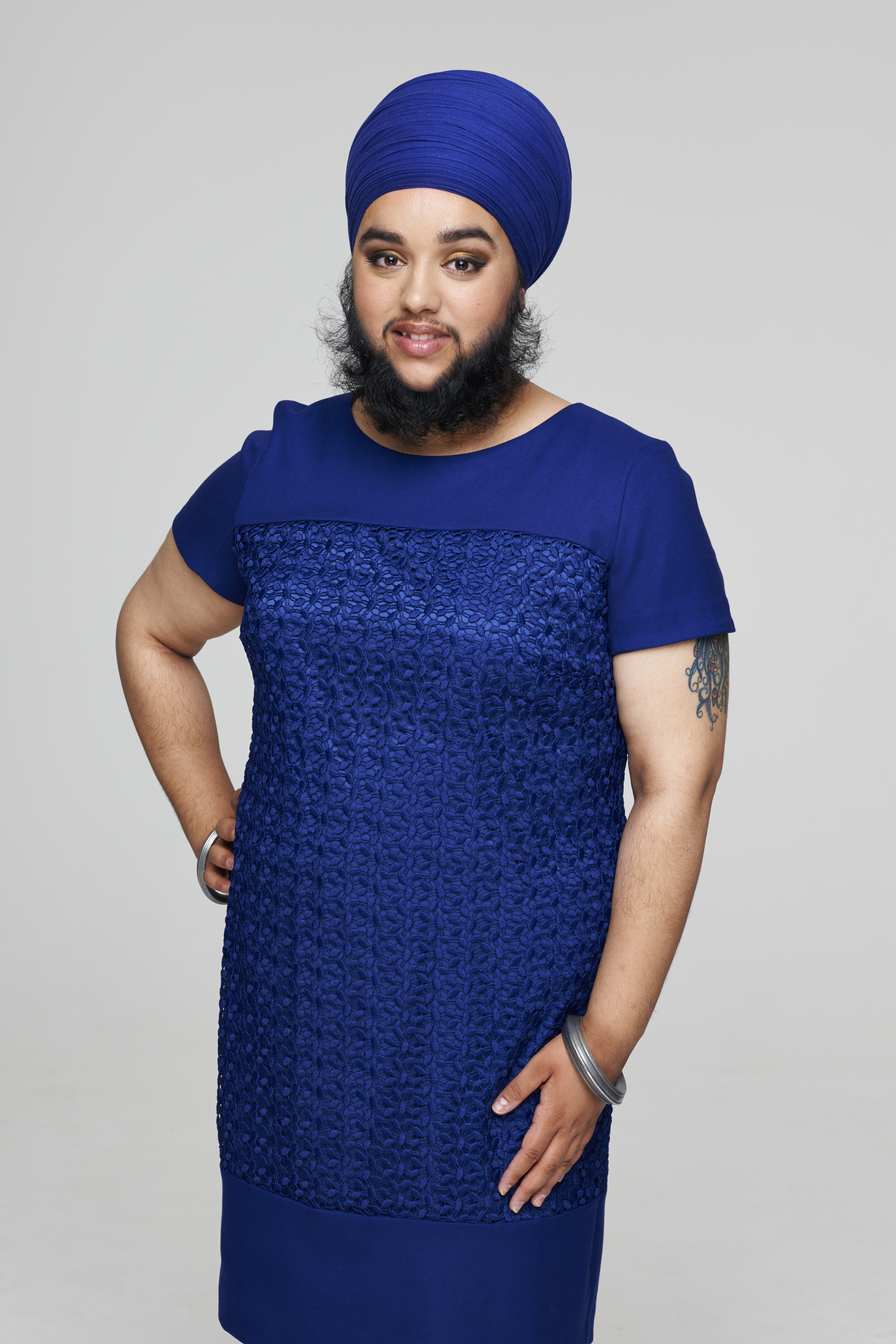 Despite her efforts she suffered horrific bullying at school, being stabbed with pens, pushed around and kicked, as well as constantly mocked.

As a result she suffered from anxiety, low self-esteem and self-harm in her teenage years.

She said: “If you look like me in a world where other people want you to look like them, it leads to anxiety.

“I went through bullying and low self-esteem and I became suicidal towards the end of secondary school.”

I had no choice but to be strong

At 16, she took the brave decision to embrace her facial hair and became the youngest woman to grow a full beard. 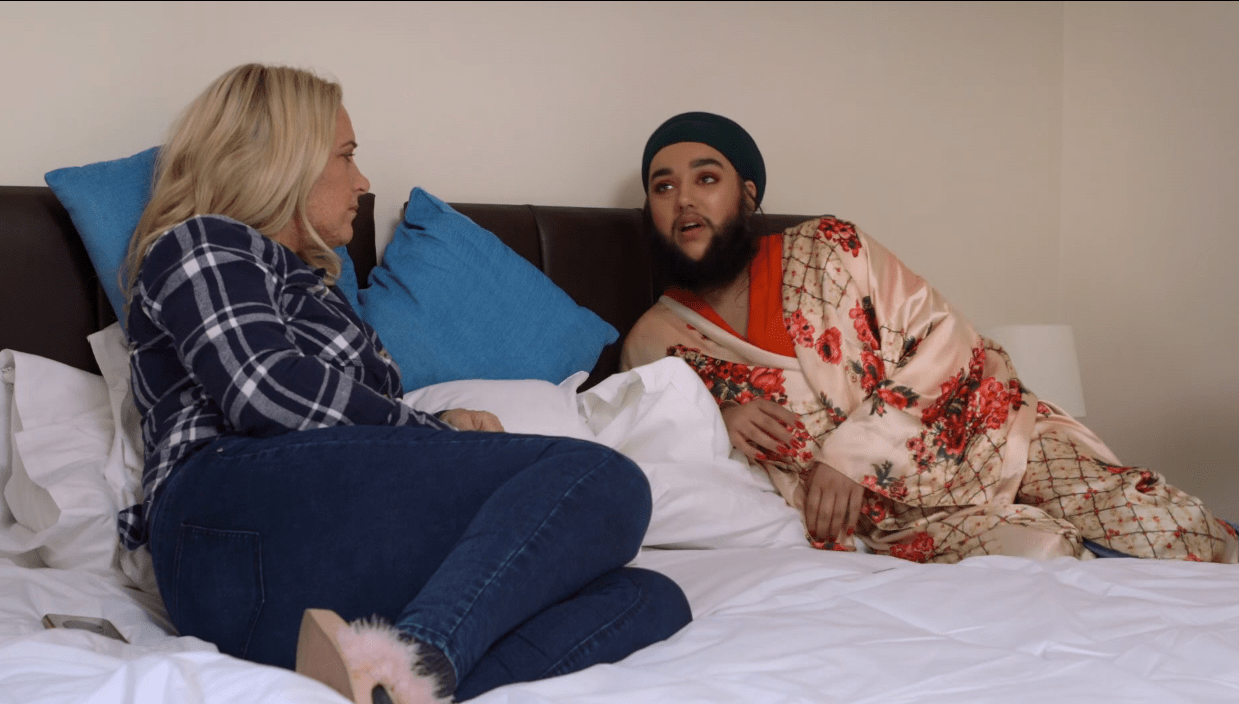 “When I decided to grow out my beard I realised I had no choice but to be strong.

“I knew I was going to look different and the world was going to see me in a very different way. I had to build myself up to be mentally thrown to the ground over and over again.”

After pressure from family, she did shave off her beard at 17 but says she hated the result.

“I cried my eyes out because at that second I was normal,” she said.

“It took away something that makes me unique. I gave in when I should have been strong, I gave in to other people’s negative perceptions of me.”

I get death threats and groped

Since then, Harmaan has used her look to fight prejudice and injustice as well as highlighting the plight of the one in five women who suffer with PCOS.

But not everyone appreciates her high profile and she says she often receives death threats.

“People think I’m trans or in drag and I get mistaken for a man all the time,” she says.

“I’ve heard everything about me and nothing shocks me anymore.

“I get a lot of death threats from insecure people and I don’t know where they are coming from so if I’m in a big crowd I do get social anxiety.

“I have been groped in public. Rowdy men think it’s funny to grab my beard and I think that’s really disrespectful.

“I’ve had people shouting abuse at me like ‘kill her before she has children’”.

Harnaam says she agreed to do the show because she others to gain from her strength.

She said: “Looking the way that I do I’ve gone through a lot. I want to help others who are different to overcome trials and tribulations and trauma. I want to help people cope with their differences as well.”

Tumours all over her body 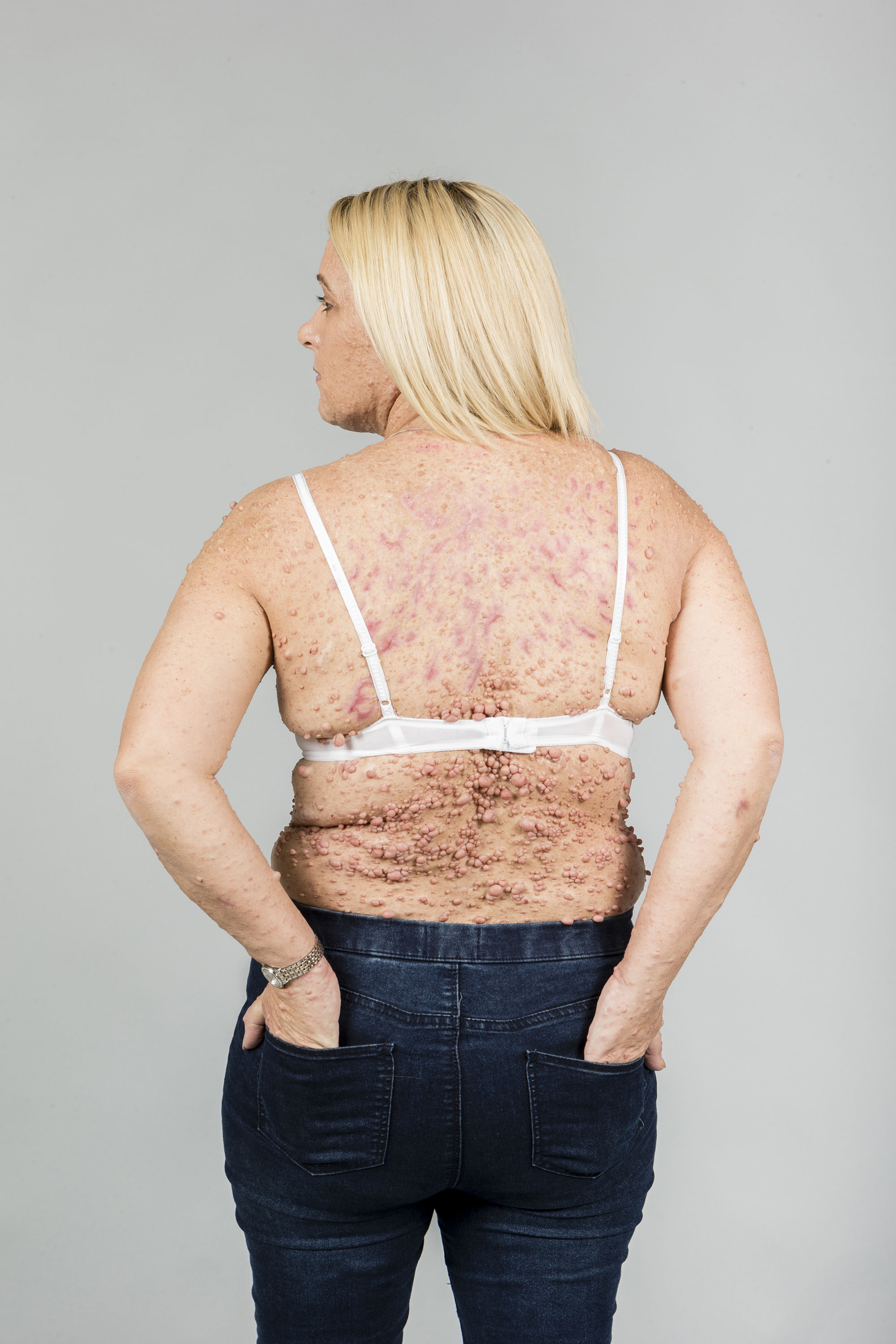 Harnaam is joined in the house by Rachael Reynolds, 43, from Huddersfield who suffers from neurofibromatosis type 1 (NF1), a rare genetic disorder that causes non-cancerous tumours to grow all over her body, inside and out.

The married  mum-of-four first started noticing the condition in her teens but it got worse with each pregnancy.

Rachael, who is also hard of hearing,  has had a lot of plastic surgery and laser treatment to remove her lumps but they continue to grow back. 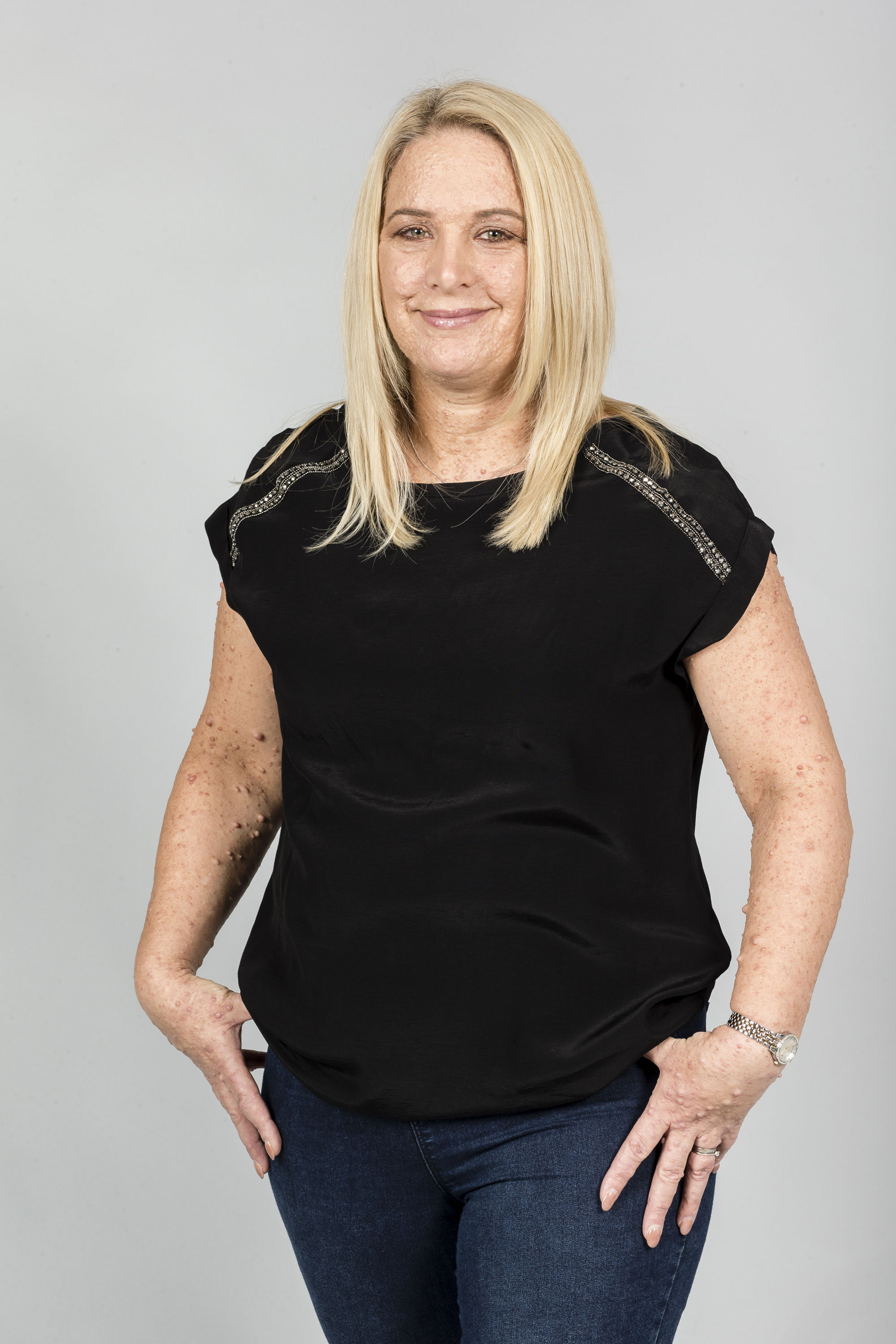 Her confidence is at rock bottom on the show and she struggles in a scene where the group go swimming.

She says: “I’ve got thousands of lumps all over my body.

The man who wants to be a parrot 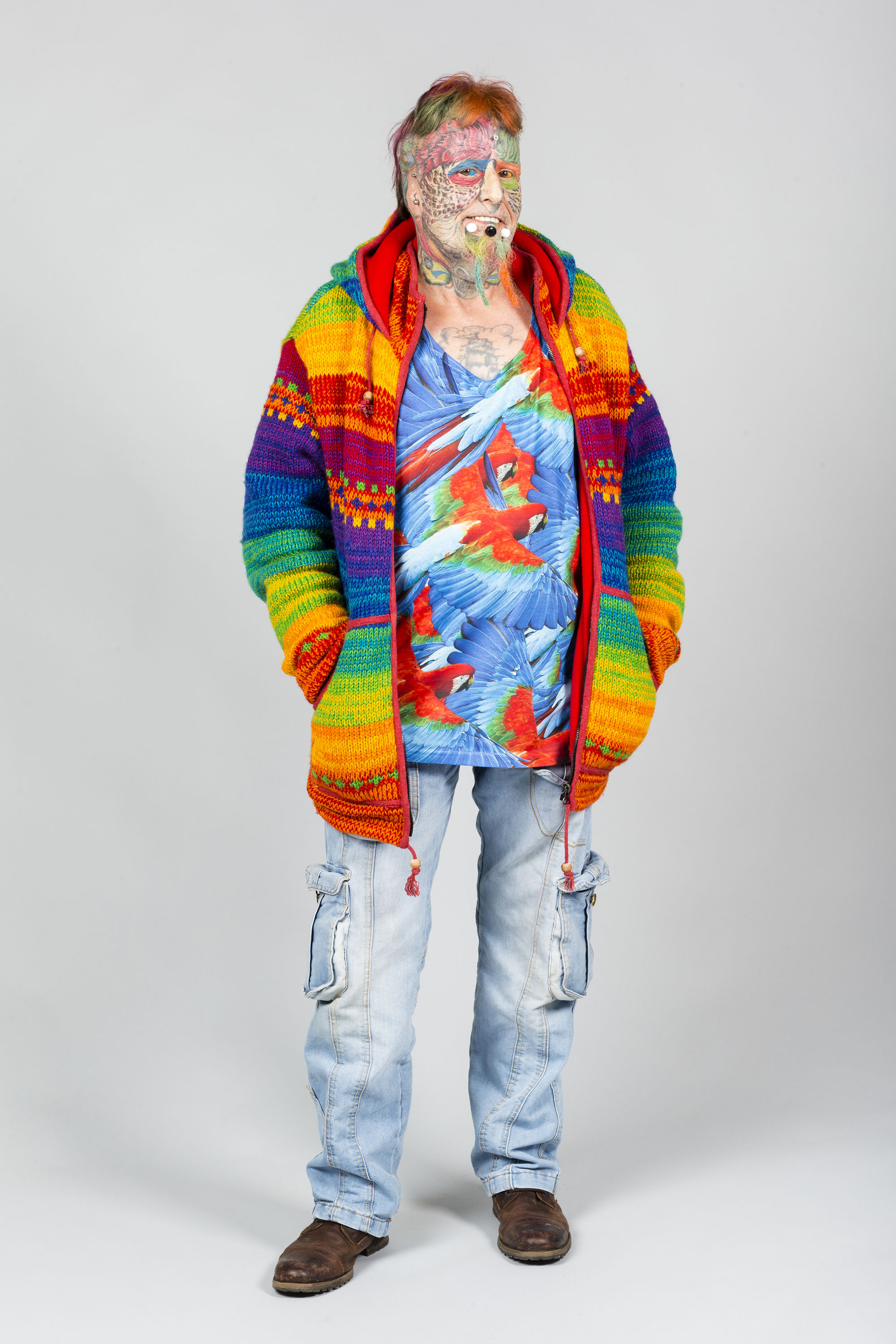 Ted Parrotman, 60, from Bristol, had numerous tattoos and body modifications – including cutting off his ears – to look more like his beloved parrots, of which he owns seven.

Formerly known as Edward Richards, he has transdermal implants in his head and tattooed eyes. Ted now wants to have septum removed so his nose can be shaped more like a beak and to have multi-coloured teeth.

He used to work in a shoe factory but has struggled to find a job since his body modifications. He says: “I want to look like a parrot because I love their colours and their characters.

Man who had his healthy leg amputated 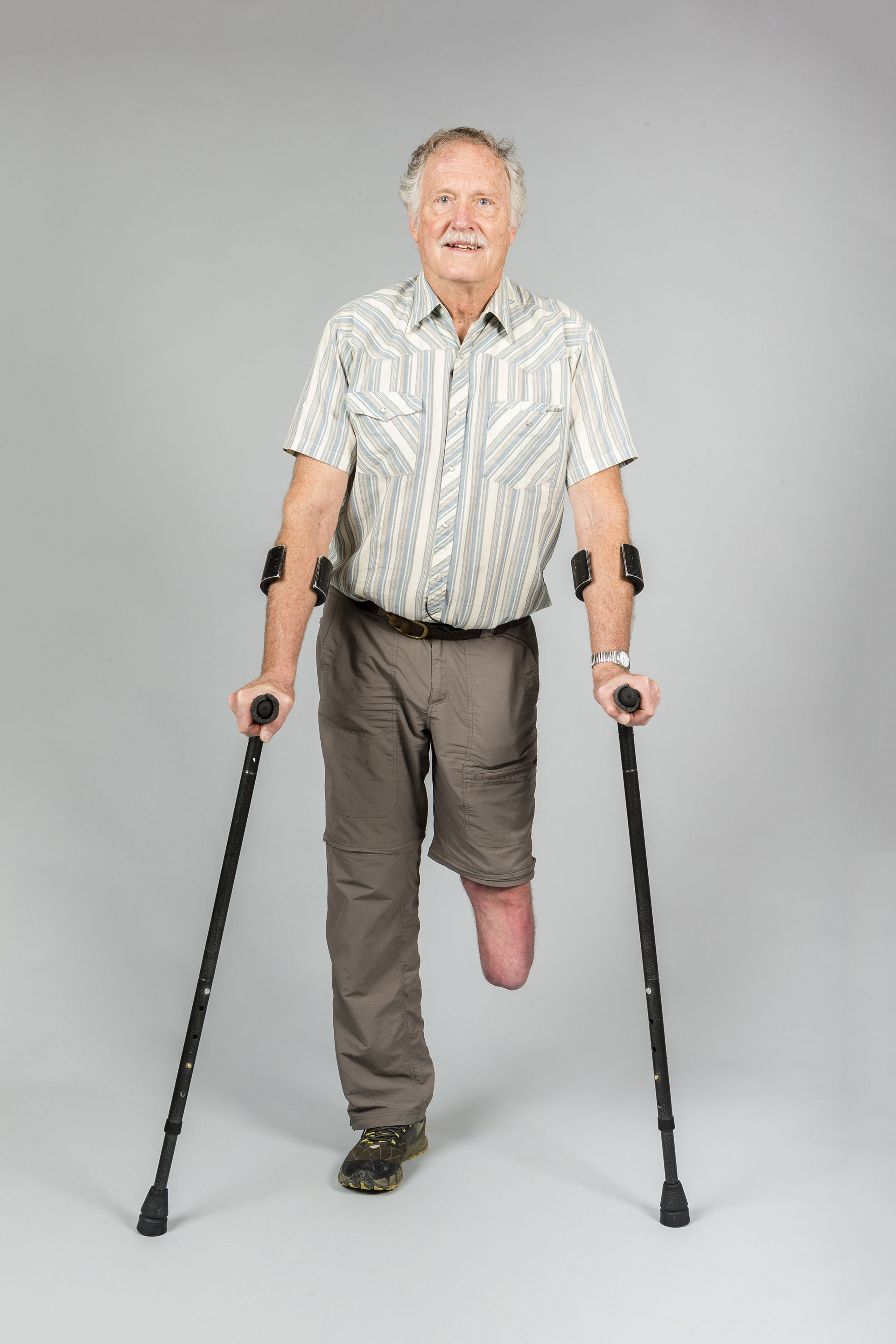 Dan Cooper, 74, from Wyoming, USA, shocks the house with his unusual story.

Since he was a child, Dan felt as if his lower left leg and foot didn’t belong to him.

It took him many years to discover that this rare condition has a name – body integrity identity disorder.

Sufferers have an intense desire to have a healthy limb amputated and in 2009, aged 64, Dan finally found a surgeon in Thailand to remove his lower leg – and he has no regrets. 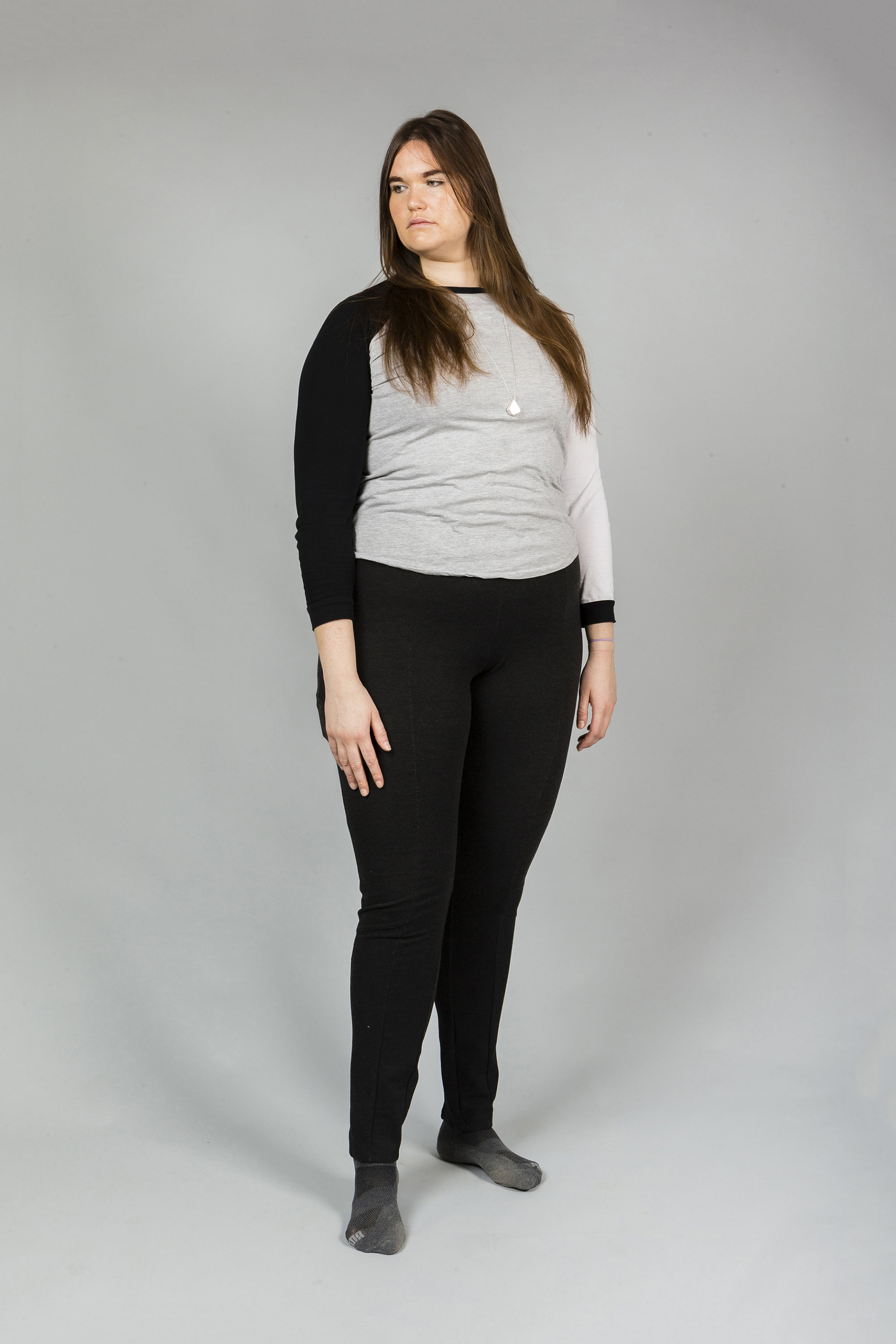 At 6ft 9in, Aly Stosz, 29, an artist from New York City, USA is one of the tallest women the world.

She documents her “humongous life” through her social media and artwork, telling people she’s an “actual giant”.

The American artist doesn’t want other women who feel like they don’t fit the traditional beauty mould to feel less worthy.

“People do look at me all the time – and sometimes I wear sunglasses and headphones just to block it out.”

The man bullies branded 'a cow' 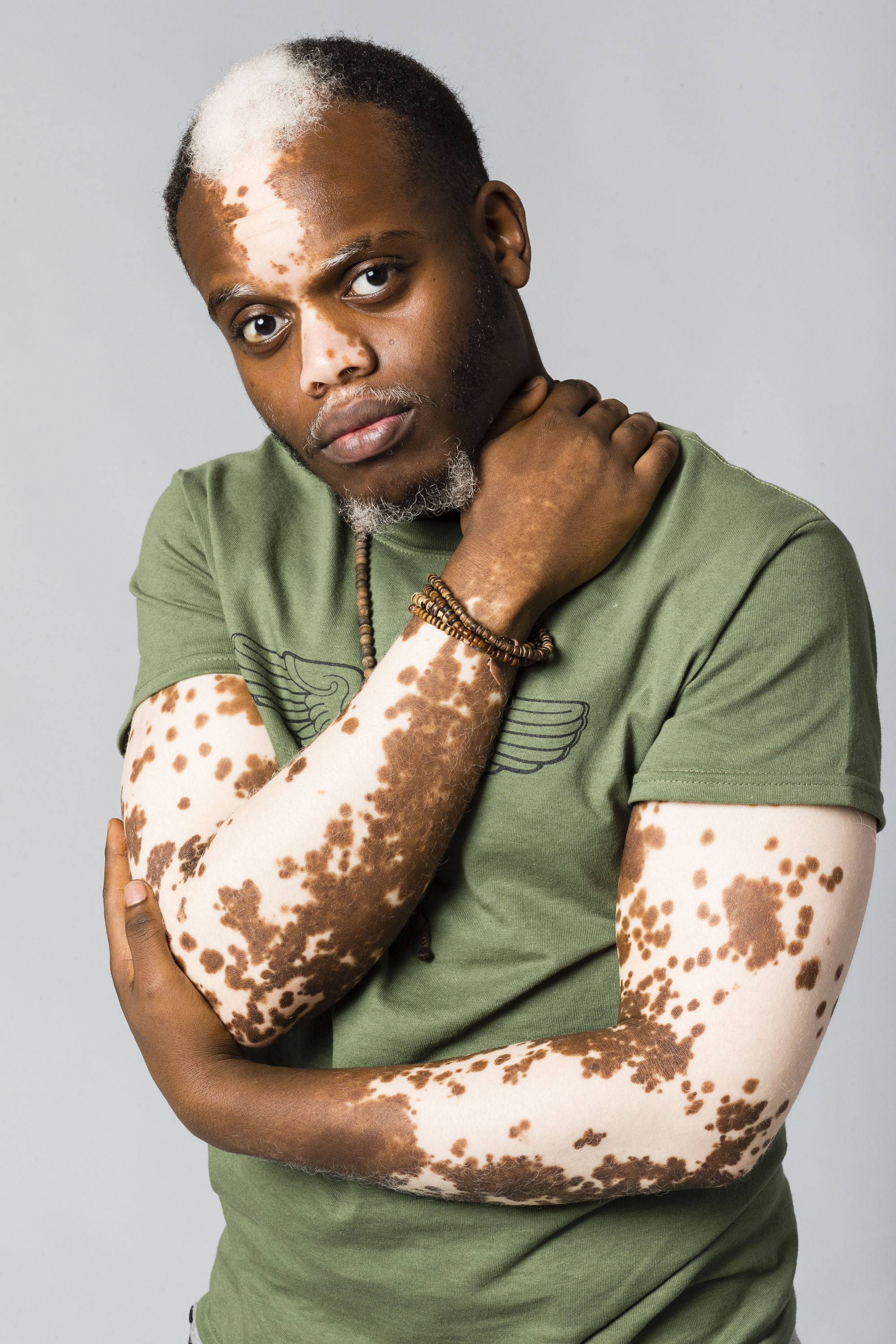 Bashir Aziz, 24, a sales assistant and model, from London was born with a form of vitiligo.

As a child his mother used to put make-up on his white patches to try to hide his condition.

Bullies called him “cow” or “zebra” at school but Bashir is now proud of his condition and flaunts his body on social media, spreading his message of body confidence.

He says: “I started off with all the white patches and then as I get older my black spots flourish.

“I’m like the Benjamin Button of vitiligo. When I was younger I just wanted to fit in but now I’m happy to stand out.”

The short person who has to buy clothes to fit toddlers 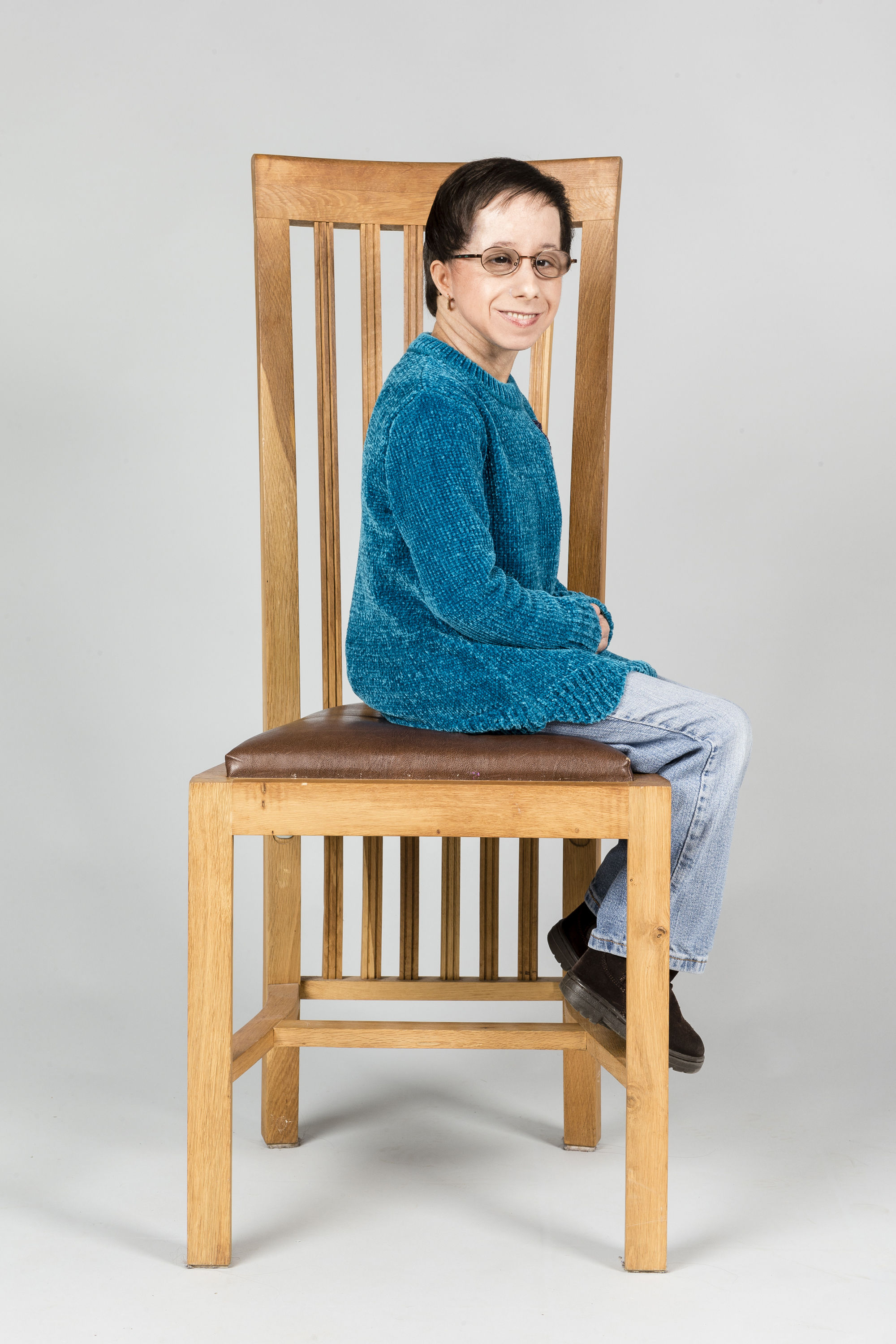 Kristin Riley, 36, an activities co-ordinator in an elderly care home, from Michigan, USA is one of the oldest people in the world with primordial dwarfism, the eldest being just 40 years old.

She is 3ft 5.5in tall and has to shop for clothes to fit toddlers.

Her brother, also a primordial dwarf, died at 24 from a brain aneurysm, a common complication of the condition and she has had brain surgery to remove her own aneurysm.

Born with a facial deformity 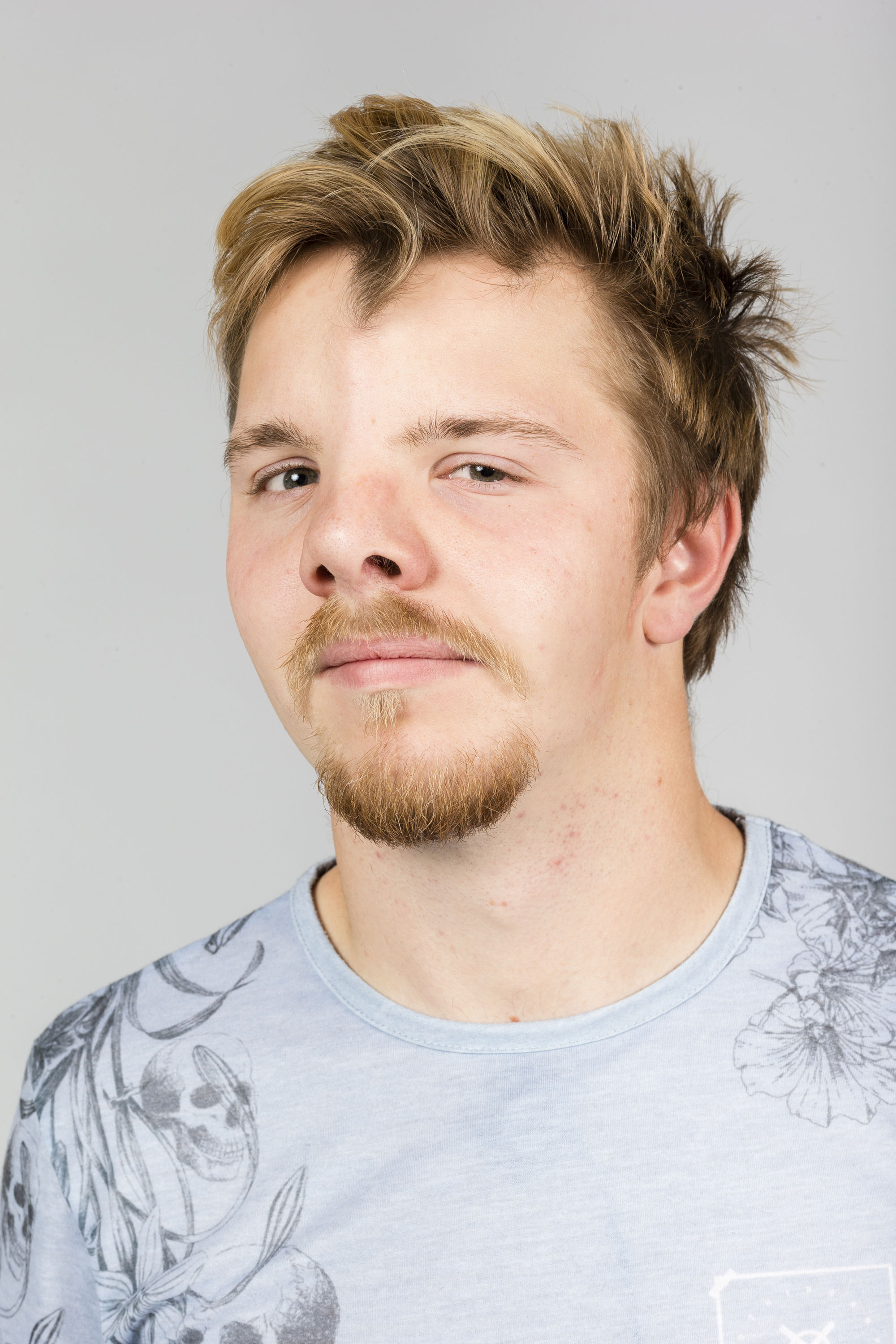 Lucas Hayward, 22, a roofer, from Leicester, was born with a facial deformity called oculo-auriculo-fronto-nasal syndrome and has undergone multiple plastic surgeries to make his appearance more “normal”.

The condition gave him a wider nose and tags on the left side of his face – he describes it as being similar to that of a cleft palate but with his nose.

He experienced a lot of bullying as a child and is now a vocal anti-bullying campaigner for disfigurement charity, Changing Faces.

His work with the charity led to him being one of the Olympic torchbearers in 2012, aged 15.

He says: “I was born with a facial deformity where my face over-developed. I’ve had a lot of surgery.

“I’ve been through a lot so I just want people to know that personality is a lot bigger than the way you look.” 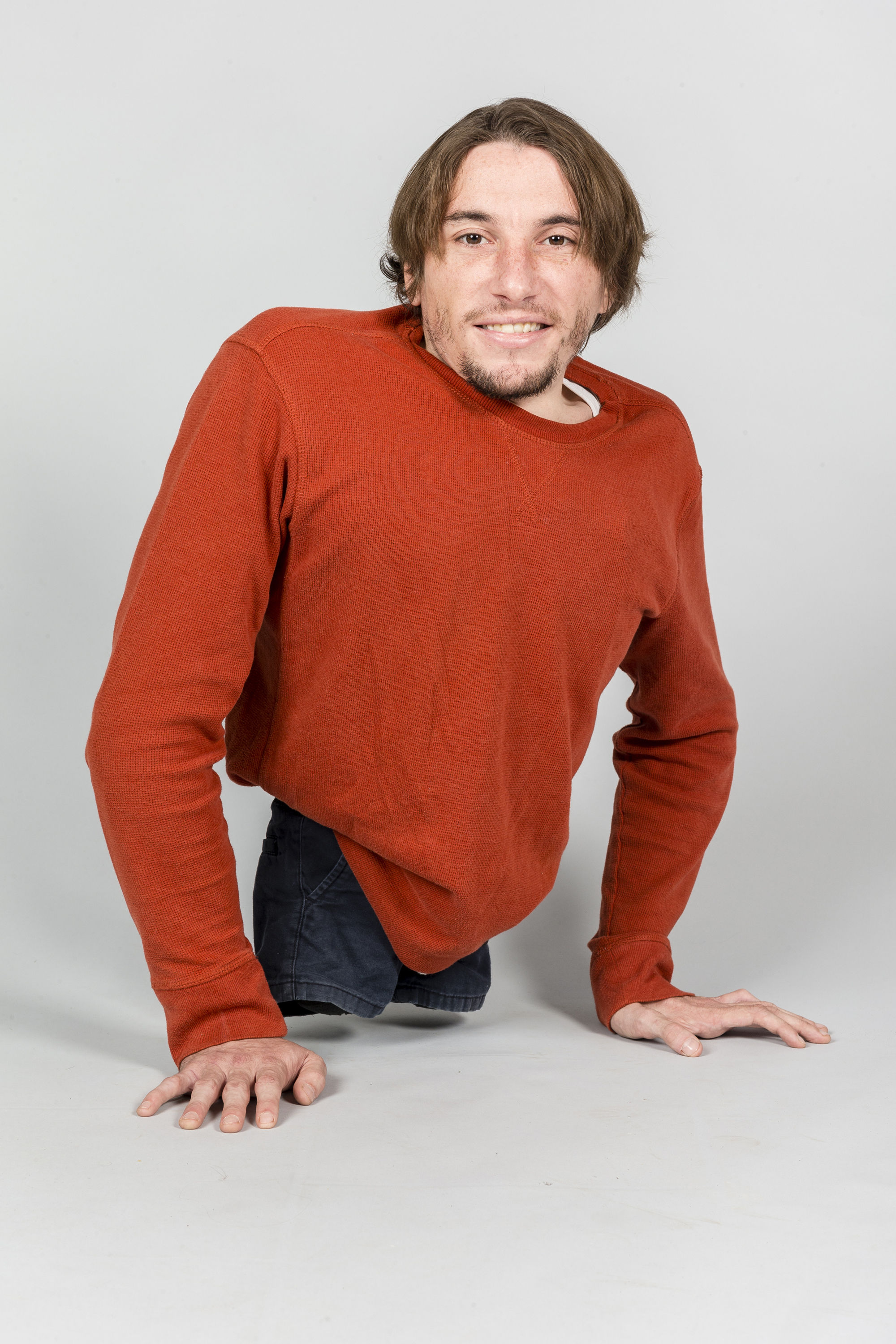 Rowdy Burton, 31, from Alabama, USA was born with the genetic condition sacral agenesis, which meant that his legs stopped growing and he had both amputated when he was a toddler.

He walks on his hands and uses a motorised skateboard to get around.

Rowdy, who has recently moved in with his girlfriend, uses his YouTube channel to discuss living with no legs.

He says: “I’d like to change the constant assumption that I can’t do things.

“You might be right but I’m going to give it a try.”

The House Of Extraordinary People starts on Monday at 10pm on, C5.