The characters’ interpersonal dynamics are fascinating, complicated, and less likely to be mired in sports-movie clichés 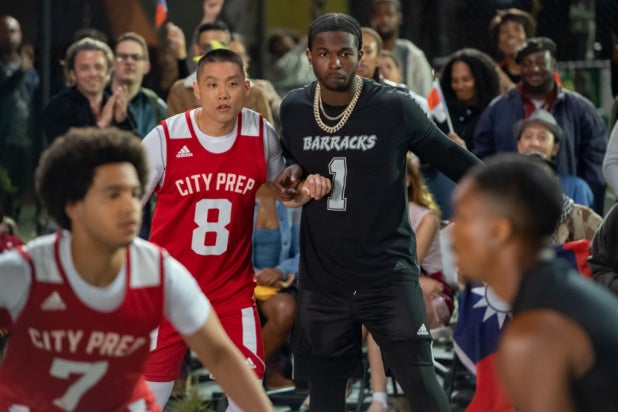 There are important stories in “Boogie” about young love, about abusive marital and parental relationships, and about navigating Western culture as the child of Asian immigrants, but the film seems determined to be about the rise of a promising high-school basketball player, even though the basketball storyline is the least interesting of the plotlines on display.

Restaurateur and “Fresh Off the Boat” author Eddie Huang makes his feature debut as a writer-director, bringing a great deal of emotional honesty and cultural specificity to the table. But while his approach to the characters and their interactions feel fresh and personal, the entire basketball plot is cobbled together from countless sports-movie clichés.

Japanese-American actor Taylor Takahashi debuts as Alfred, aka Boogie, a high-school senior who carries the hopes and dreams of his Chinese-born parents (played by Pamelyn Chee and Perry Yung) on his shoulders. The film opens with a flashback of his mother and father visiting a fortune teller, and while it’s clear that the two of them are already in near-constant conflict, the psychic advises them to be kind to each other, since their offspring will reflect their individual strengths.

Boogie has transferred to City Prep, whose basketball team he describes as “hot trash,” because he wants to be noticed by college recruiters. He’s gotten some nibbles, but no scholarship offers, and his debt-ridden parents are pushing him to get a free ride on his way to the NBA. (Recruiters admire Boogie’s skill while also noting that his brash arrogance makes him a terrible team player.) When a slick recruiter (Mike Moh, “Once Upon a Time in Hollywood”) nabs a $750,000 deal for Boogie to play in China for a year, which would forfeit his college eligibility, Boogie and his parents have to deal with their conflicting dreams and expectations.

This part of “Boogie,” from the star player learning to be humble and cooperative to his showdown with a fierce rival (a memorably indelible bad guy, played by the late rapper Pop Smoke, in his one and only film role), you’ve probably seen before. What genuinely resonates is the intensity of the love-hate relationship Boogie has with parents (and that they have with each other), Boogie’s burgeoning romance with Eleanor (Taylour Paige, “Ma Rainey’s Black Bottom”), and his bro-banter with best friend Richie (Jorge Lendeborg Jr, “Love, Simon”).

Takahashi — a first-time actor working with a first-time director — brings real depth to the character and makes his interactions with the people around him heartfelt and affecting. As a story about a high-school senior unsure about his future, coping with a volatile family and falling in love for the first time (for once, it’s the girl who talks the hesitant and insecure boy through a sexual encounter), “Boogie” is genuine while weaving Black, Hispanic, Asian and White teenage New Yorkers together with effortless ease. It’s only in assuming that we care more about Boogie’s athletic journey than his interpersonal relationships that the film falls short.

Cinematographer Brett Jutkiewicz (“Ready or Not”) and editor Joan Sobel (“Nocturnal Animals”), for their part, don’t find as much of interest in the basketball sequences (including the inevitable climactic Big Game) as they do in other aspects of Boogie’s story; the scenes with Eleanor are as romantic as the moments at home are stressful. One dinner sequence, in particular, is held in one continuous shot at a distance, tensing us for the violence we worry will erupt.

Watch Video: 'Fresh Off the Boat' Reveals the Truth About Santa in Midseason Finale (Exclusive)

It’s those moments of real specificity, be they tender or terrifying, that give “Boogie” its impact, and it’s that ability to access human moments that will make Huang’s next film one that will be eagerly anticipated.

5 things you never knew about the original 1994 ‘Lion King’

Behold, the Most Perfect Plaid Coat, and It's On Sale Today For $64!