Warning: The following contains spoilers from Wednesday’s Chicago Med. Proceed at your own risk!

After many seasons of ups and downs, including the somewhat abrupt departure of April’s portrayer Yaya DaCosta at the conclusion of Season 6, giving a happy ending to “Chexton” was at top of mind.

“We really wanted to close their story [and] their journey that they’ve gone on all these years. We really wanted closure for that,” Frolov says. And not just any kind of closure, but “satisfactory closure,” Schneider adds.

The couple certainly got that in Wednesday’s fall finale, which marked longtime series regular Brian Tee’s final episode as Ethan. The installment saw the doc and April get married, then embark on a new life together, running a mobile health clinic.

Below, Schneider and Frolov discuss Ethan and April’s swan song and when viewers might see the pair again.

TVLINE | What was most important for you in crafting Ethan’s farewell and giving a proper goodbye to both Ethan and Brian?
DIANE FROLOV | We wanted to really finish Ethan’s arc. He’s had a long journey. He’s gone through a lot of changes. And then he’s reunited with his love. That was really important to us.
ANDREW SCHNEIDER | From the beginning of the season, knowing that he was going to exit, we wanted to make it a lovely winter finale.

TVLINE | We’ve seen a lot of characters exit Med over the years, sometimes under very intense, dramatic scenarios, and this one is such a happy one. Was it important for you that Ethan go out on a positive?
FROLOV | Yes, it was.
SCHNEIDER | We wanted to leave the possibility that he and April could return. He’s left the hospital. He hasn’t left Chicago, and they will have patients that may need to come into the hospital. We would love to see them from time to time in their new life.

TVLINE | Has there been any talk about seeing them season, especially since Brian’s coming back to direct an episode later in the season? Might he also show up on screen?
SCHNEIDER | We’re in the writers’ room discussing that.
FROLOV | There’s logistics involved in those decisions as well, [like] what the actors are doing. 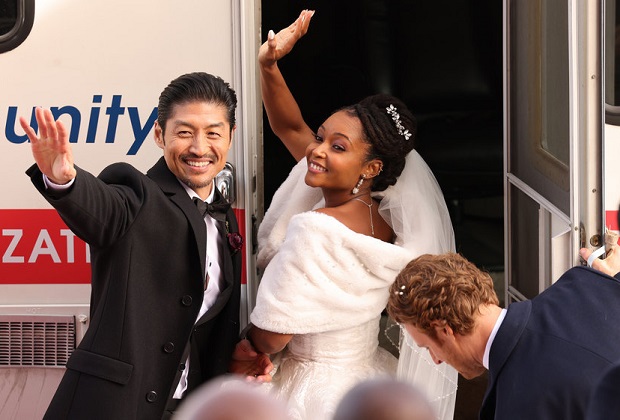 TVLINE | How did you know that April and Ethan were an endgame couple? What about them, for you, said, “We have to have these two end up together”?
SCHNEIDER | We’ve always said that these two love each other despite the problems that they’ve had in their relationship, and her going off to go to nurse practitioner school. We’ve never lost the feeling between them. And so, we felt this was a perfect way to realize their destiny. He’s changed in ways that allow him to be the man she needs and vice versa.

TVLINE | What kind of conversations did you have with Brian about his exit storyline? Did he have any thoughts about how Ethan should go out?
FROLOV | We did talk to Brian about it, and he was really happy with the idea.
SCHNEIDER | Going back to something Diane was talking about, Ethan’s journey. He started as a guy who was very rigid and only about the rules and regulations. And through his experience, romantic and [when he was] shot, he’s become a different person. A person more open to this relationship. It seemed like the perfect ending to his long story, to both their long stories. 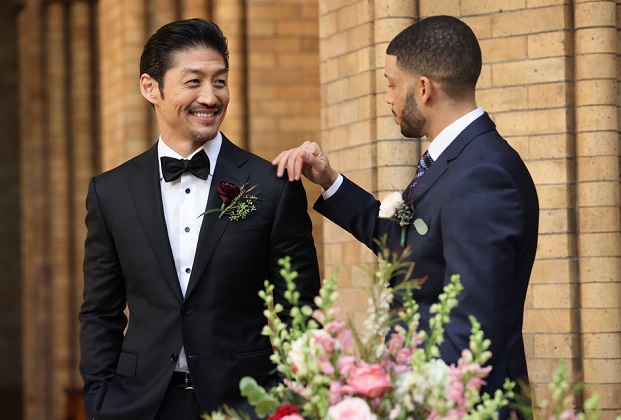 TVLINE | Was April’s toss of her bridal bouquet to Hannah a storyline hint?
FROLOV | [Laughs] No, that was actually spontaneous. I believe that the director suggested it to Yaya.
SCHNEIDER | It surprised Jessy Schram.

TVLINE | It was great to see Noah again, but it also made me wonder if there were any plans or attempts to try to get Ethan’s sister (played by Arden Cho) back for the wedding?
SCHNEIDER | Yeah, she was unavailable.

Med fans, what did you think of Ethan’s swan song? Grade the episode below, then hit the comments!

Couple and daughter, 7, homeless after river bank collapses around their £400K dream house – The Sun