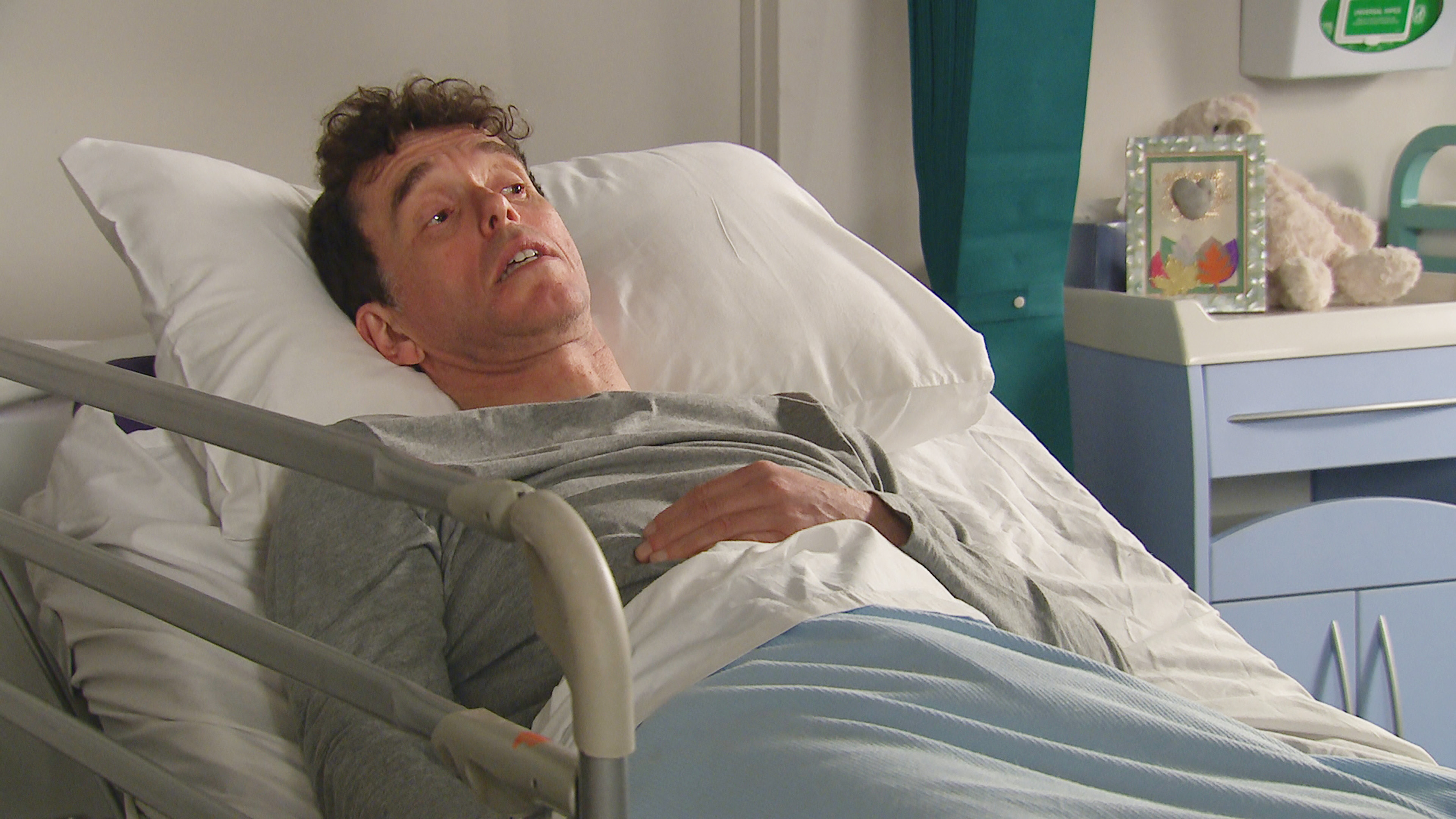 No Emmerdale wedding is complete without a last-minute hitch (just ask Dawn and Billy), but when the groom is recovering from a serious stroke and is still in a physically vulnerable condition, last-minute hitches could potentially be life threatening concerns.

Marlon (Mark Charnock) has pledged that he will walk down the aisle himself, to show how far he’s come in his recovery and to show confidence in his future. But when he tests this out during his impromptu stag do his legs buckle and he crashes to the ground.

He tries to protest that he’s fine, but a worried Paddy (Dominic Brunt) insists that he gets checked out at the hospital. Marlon will only agree to this on the condition that the whole incident is kept from Rhona (Zoe Henry), so he definitely doesn’t want an ambulance.

At the hospital he’s told that there’s not lasting damage due to the fall, but the doctors do find that his blood pressure is seriously high and he’s told he’ll have to stay in hospital overnight.

By the next morning, things still haven’t improved. Will the wedding have to be cancelled?

It’s been quite the journey for actor Mark Charnock, who’s learnt an awful lot since being told about Marlon’s life changing storyline.

During a very exciting Emmerdale press event, he told us that he found everything very ‘daunting’ initially, because he ‘wanted to get it right’ as it ‘feels like a big responsibility’.

‘But it was a fascinating journey’, he continued.

‘I was lucky because the scripts were so brilliant when it came out and the people from the Stroke Association were so helpful. What it meant was I could select certain tropes that made it specific to him. So for example with the speech I know somebody who’s got a stutter and whenever he comes to a word that begins with a vowel or an H he does a little [breath noise] and I’ve sort of stolen that. It was just bits and pieces of things like that that just helped.’

Zoe Henry, who plays Rhona, added: ‘And latterly you’ve had an adviser on set, haven’t you, for physical stuff so somebody who could say, “actually you probably wouldn’t be able to do that at this stage in your recovery”, so that’s been helpful.

Mark smiled: ‘Really helpful. She’s quite strict as well, which is great. Especially with the walk down the aisle. I was outside there and she was, “No. No, do it again.” That was brilliant because it just helped me get it.

‘She works with people who’ve had strokes every day, all day, and it was great because once I got in here and did it, I came out and asked if it was alright and she went, “It was bang on.” You felt like you’d won the lottery.’

Petition to sack Piers Morgan from GMB over Meghan Markle comments gets 88,000 signatures – but presenter laughs it off