Roger Allam has played DI Fred Thursday in the ITV drama since it began in 2012. Along with his right-hand man Endeavour Morse (played by Shaun Evans), Fred has helped to solve a number of murders over the years. However, since it was confirmed the series was coming to an end, the 68-year-old has opened up about what his journey playing Fred has been like.

The actor went on to admit that he was “resistant” about taking on the role to begin with.

“I’d never done a really long-running series like this before, and indeed I was very resistant to doing it,” Roger admitted when speaking about taking on the role.

He explained when he signed up, he never thought it would run for so many years.

He continued: “I think I signed up for two years and then we just took it year by year…” 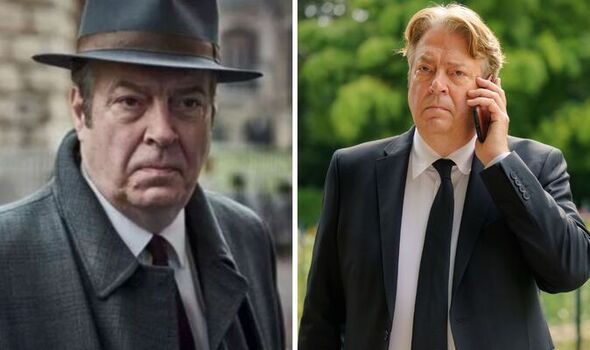 Despite his worries, Roger said he has loved playing DI Thursday and always looked forward to joining the cast back on set.

“What I was looking forward to about going back and what one looks forward to, hugely, is just seeing everyone and doing scenes with them and acting with them,” he added to Masterpiece.

“It becomes strangely … ‘easy’ is the wrong word…it becomes in its way full of ease.

“But it’s also very satisfying because, for me, I’ve never known a character this well, because it’s been such a long time.

“So I look forward, hugely, to reacquainting myself with Fred Thursday and also all my fellow actors who have been in it from the beginning.”

Endeavour is the prequel of the Inspector Morse series, which followed a young Endeavour Morse at the beginning of his career.

In May, Screenwriter Russell Lewis, Shaun and Roger mutually decided to bring the Endeavour to a close.

Roger and the rest of the cast are currently filming for the last-ever series in Oxford.

Announcing the decision, executive producer Damien Timmer assured fans the final instalments would include “many surprises” and some returning favourites.

Speaking about the move to end the ITV series, Damien on behalf of producers, Mammoth Screen said: “Endeavour has been a real labour of love for all of us, and we salute Russell Lewis for his extraordinary achievement in chronicling Endeavour Morse’s coming of age across 72 hours of TV.

“Russell always knew where he wanted the series to end, and that Remorseful Day is nearly upon us!

“We’d like to thank Shaun and Roger and all the other members of the Endeavour family on and off-screen, and to the show’s fans both in the UK and abroad.

“Russell has many surprises up his sleeve for the final three films, with the return of some familiar faces and new challenges for Endeavour and Thursday to face before the final goodbye.”

At the time, ITV also teased fans will a preview trailer of what they can expect from series nine – and it’s set to be an emotional one.

A tearful Endeavour said: “How clear, how lovely bright, how beautiful to sight those beams of mourning play?”

“How heaven laughs out with glee like a bird set free up from the eastern sea, soars the delightful day.

“Today I shall be strong, no more shall yield to wrong shall squander life no more.”

Endeavour is expected to return to ITV later this year.