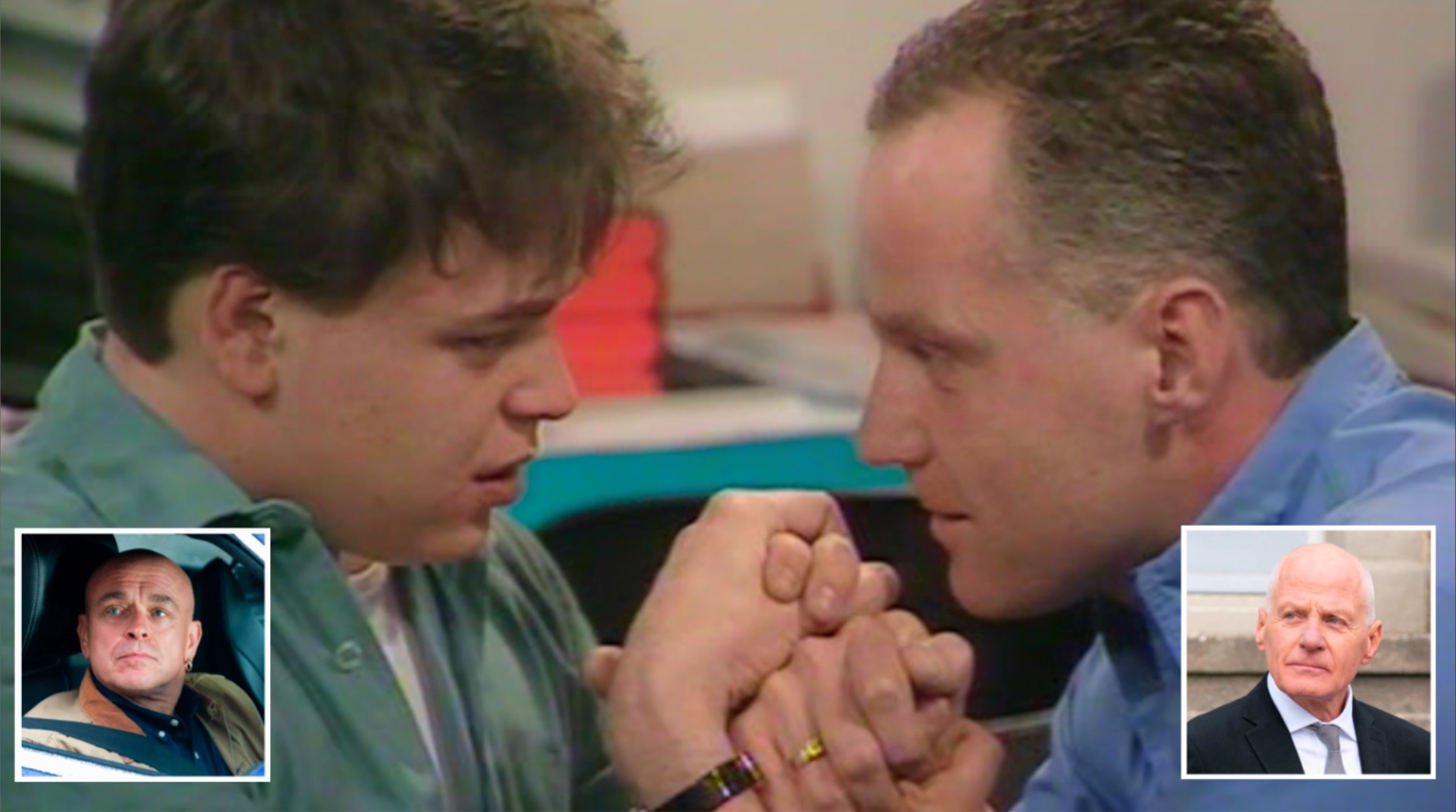 It’s a moment over thirty years in the making, as legendary EastEnders couple Colin Russell (Lord Michael Cashman) and Barry Clark (Gary Hailes) reunite on screen, and we couldn’t be more excited.

It was confirmed earlier this year that both characters would stage a comeback as part of Dot Branning’s (June Brown) funeral storyline.

Graphic designer Colin and market trader Barry, as long-time viewers will recall, made history back in the mid-eighties as one of TV’s first ever gay couples, with their relationship considered to be a breakthrough moment for LGBTQ+ representation on screen.

In 1987, EastEnders aired a kiss between the two characters, the first ever same-sex kiss in a soap opera – which was simply a loving peck on the forehead – and it caused major controversy at the time.

Dot, meanwhile, who was friends with both Colin and Barry, famously reacted badly to finding out that they were in a relationship.

Soon enough, however, she accepted the relationship, and remained the best of friends with Colin until his departure in 1989.

Barry, who had previously left the soap in 1988 after his relationship with Colin reached an end, made a one-off return as part of his ex’s exit storyline, though the couple did not get back together.

Colin did, however, stage a short comeback in 2016 to invite Dot to his same-sex wedding as he married Eddie Tsang. Dot was initially opposed to attending the service, but she ultimately did so and had a great time.

Colin will return to EastEnders once again next week, along with a host of other classic characters including Mary ‘The Punk’ Smith (Linda Davidson), lofty Holloway (Tom Watt) and Disa O’Brien (Jan Graveson).

Barry will also be making a return, thus marking the first time that he and Colin will be on our screens together in over three decades.

Colin arrives in Albert Square on the morning of the funeral to pay his respects to Dot, and Sharon Watts (Letitia Dean) is delighted to see him.

Barry, meanwhile, will arrive afterwards, as Colin exits the Vic with Kathy Beale (Gillian Taylforth), who recognises the driver of an on-coming car as none other than Barry.

But just what will transpire as Colin and Barry reunite on-screen? Have they been in contact since 1989, or will the latter’s arrival in the Square come as a shock to the former?

It’s going to be a history-making moment – one that you’re absolutely not going to want to miss.

‘I cannot tell you how many messages I’ve had since the news was announced,’ Gary Hailes said of his return. ‘I have been inundated! I wasn’t expecting it.

‘I’ve enjoyed hearing all the speculation about Colin and Barry’s return and what it might involve.

‘All I can say is that the episodes are so well-written, and there’s a real understanding of what went on for them before.’

EastEnders airs these scenes on Monday June 12 and Tuesday June 13 at 7:30pm on BBC One.

Coleen Nolan reveals ex-husband Shane Richie invited her to his wedding, but she bailed out at the last minute

The Most Stylish Items From The Latest Fashion Releases

Zendaya’s Emmys Dress Has The Most Intense Plunging Neckline

Thomas Markle Should Just Name A Dollar Figure And Go Away