Well, y’all, it finally happened. The first episode from the highly anticipated Game of Thrones prequel, House of the Dragon, just dropped, and GoT fans are buzzing with excitement.

Set 300 years before the bloody events of the original series, the new show gets personal with the ancient families of Westeros…including old-school Targaryens. But like any good fantasy show, it doesn’t just center around one family. We need to see some damn good supporting characters too!

Enter the ever-dashing Corlys Velaryon (Steve Toussaint), also known throughout Westeros as the Sea Snake. He’s a legend in the series and has personal ties to the Targaryens…because let’s be honest, who in the show doesn’t have ties to them? And judging by what we’ve seen of the Sea Snake, there’s definitely more than meets the eye with this character.

Here’s some background on our new fave House of the Dragon character the Sea Snake, along with deets about the man who is playing him. 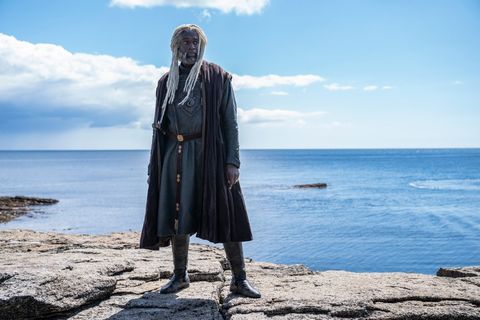 The Sea Snake comes from a highly decorated family in the books.

Here’s some intel from the books: As the current head of the House Velaryon, Corlys’s family is an old and ancient one in Westeros, with some saying they predate even the Targaryens. Settling in the Crownlands, the family rules over Driftmark, considered to be the largest island of Blackwater Bay.

While the Velaryons aren’t necessarily dragon riders like the Targaryens, they are considered to be some of the Targaryens’ closest allies, to the point of carrying King Aegon I’s soldiers across the seas on their ships during the latter’s old conquest to rule Westeros. In fact, these families are known to be so close that many of the Velaryons often become part of reigning Targaryens’ inner circles.

As you’ve probably noticed in HBO’s teaser photo, the Sea Snake’s hair is roughly the same shade of silver as the Targaryens’. That’s likely because they’re all of Valyrian descent, meaning they all have similar physical appearances, whether it be hair color or violet-colored eyes.

While it’s somewhat hard to tell in the new photos, chances are we’ll get a better look at the seafarer’s appearance as the TV show debuts.

He’s a legend on land and sea.

Well, you aren’t just born with a kick-ass moniker like the Sea Snake, right? It has to be earned. Corlys is famous in Westeros for his many voyages on land and sea, where he made lots of money traveling beyond the waters of his homeland. His adventures were so well known that he’s actually described in Fire & Blood as “the greatest seafarer the Seven Kingdoms has ever known.” Whoa.

Now, I’m sure this is all great. But what about how Corlys got his famous nickname? As it turns out, it had nothing to do with his successes as a seafarer. It actually had to do with adopting the moniker from the boat he sailed on, aptly named—what else?—the Sea Snake.

He’s married to a Targaryen princess.

As if the Velaryons and Targaryens aren’t close enough, Corlys has one more personal tie to add to the mix: In the books, he’s married to Rhaenys, the daughter of Aemon Targaryen and granddaughter of King Jaehaerys. While it initially sounded like he and his wife would eventually take over the throne, it was the Sea Snake’s own ambitions that slighted him from ever ruling Westeros. A few things come out of this: Not only is his wife overlooked from her birthright, but his future son and daughter eventually get passed over too in favor of Viserys Targaryen (you might remember him from the first season of GoT) becoming the head of the family.

And as you might expect, this clearly doesn’t sit well with Corlys, leading him to team up with Daemon Targaryen to help him claim the crown.

Steve Toussaint gave insight into the Sea Snake himself.

“He is this nautical explorer, the richest man in the land, and he’s part of the governing council and so forth,” Steve told Men’s Health. “But ultimately, for me, what his engine is, is the fact that he’s trying to elevate his family, elevate his name. When his wife was passed over for the crown, he seems to take it that much more personally than she does. Ambition is his driving force for most of the season.”

As we know from the original Game of Thrones series, ambition as a driving force can certainly lead to interesting Westeros predicaments. Let’s just hope the show gives us some good Daemon-Corlys scenes too, because we all need some good friendship moments these days.