Home » TV & Movies » Hillary and Chelsea Clinton at TIFF: ‘Being a Woman Is Political’

Hillary Clinton is no stranger to film festivals. In 2020, the former Secretary of State traveled to Sundance and Berlin to promote the Hulu docuseries about her career. However, this year Clinton arrived at the Toronto International Film Festival with her daughter Chelsea in a very different capacity — as executive producers. The pair launched the new film and TV company HiddenLight Productions in 2021, but the fruits of those labors just emerged this week.

Friday saw the premiere of the documentary “In Her Hands,” a portrait of former Afghan female mayor Zarifa Ghafari, which the company produced with Netflix. The movie, co-directed by Afghan filmmaker Tamana Ayazi and Oscar nominee Marcel Mettelsiefen (“Watani: My Homeland”) screened the same day as the release of the unscripted AppleTV+ miniseries “Gutsy,” which features the two Clintons in conversation with other famous women. The connection between those two projects hints at the overall focus of BrightLights as its executives make the rounds at TIFF.

“Someone asked me if this movie is political,” Chelsea told IndieWire in a brief conversation with her mother at the festival before the “In Her Hands” premiere. “Well, being a woman is political.” The pair weren’t in town long enough to see other movies, but “we need a list,” Hillary said, adding that their team was scouting for talent in the lineup.

Co-founded with British producer Sam Branson, the Clintons’ company differs from Higher Ground — the production outfit launched by Barack and Michelle Obama — in that they have no exclusive studio deals akin to Higher Grounds’ first-look with Netflix. Instead, they have been exploring a wide array of opportunities, including partnering on acquisitions from festivals. While they remain focused on non-fiction projects for now, the Clintons haven’t ruled out the possibility of narratives. The Obamas recently made a break from their own documentary projects to produce an adaptation of Mohsin Hamid’s novel “Exit West.”

There has been some skepticism in the industry about the recent content development efforts by high-profile public figures whose background isn’t producing, from the Obamas to Prince Harry and Meghan Markle’s Archwell, but the early output from the Clintons does seem to lean into their brand. “In Her Hands” merges the older Clinton’s background in foreign policy with her female-focused agenda.

Though Hillary struggled to find an endpoint to the Afghanistan war during her time in the Obama administration, she spent a lot of time in the country and was drawn to the 26-year-old mayor Ghafari’s story as a result.

“It’s a compelling but sometimes difficult-to-watch story,” she said. “I had the great privilege and challenge when I was Secretary of State to travel to Afghanistan numerous times, and I fell in love with the people in that country, particularly the women and girls who were able to go to school and practice their professions — and as in Zarifa’s case, enter politics, enter government, make their contributions as the active and involved citizens that they were.” 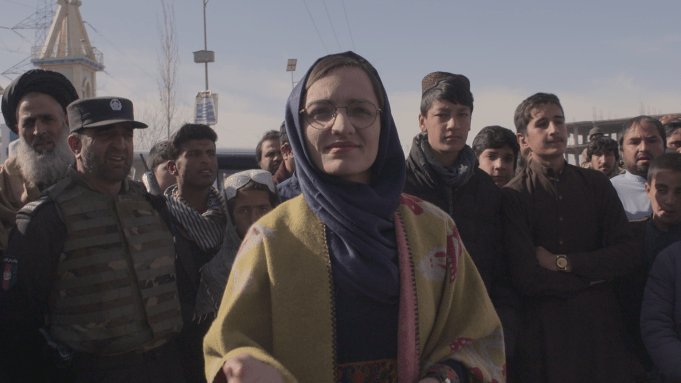 She briefly touched on the fallout of the U.S. withdrawal from Afghanistan, which ultimately led Zarifa to flee with her family to Germany.

“Tragically, the story that you’re about to see is one that’s almost unimaginable,” Hillary said. “To be forced to leave your home, your friends, members of your extended family, to seek a new life elsewhere. This is an important story, but it’s a story that I hope people will think of as not only about Zarifa, even not only about women or the country of Afghanistan, but the universal values it represents.”

Chelsea then stepped up to the microphone to note that when Ayazi fled Kabul with one bag last year, she brought a hard drive containing the footage from the film.

“I think that we have to honor that, respect that, pay attention to that dedication to ensure that we all have a chance to bear witness to what the women of Afghanistan have and continue to endure,” Chelsea said. “It is with incredible gratitude and humility that we ask you to watch and listen and not look away.”

The end result is a thoughtful if at times scattershot portrait of Ghafari’s story, but often elevated by the revealing access obtained by the directors. That includes not only footage of Ghafari, her estranged bodyguard, and others in her close circle, but also several Taliban fighters on the outskirts of Kabul. The movie captures the sad ending to democracy in Kabul, but also sets up the latest chapter in its subject’s career, as she attempts to help women who remain in the country from abroad.

“In Her Hands” is one of two recent documentaries capturing the fallout of the U.S. withdrawal from Afghanistan, as Matthew Heineman’s recent Telluride premiere “Retrograde” (produced by National Geographic) follows the same timeline from the perspective of an Afghan general who also wound up fleeing the country. Together, the two movies not only go beyond the most visible images of the withdrawal from last summer but provide jolting reminders that the daily struggle continues there even as the headlines have faded.

Zhafari, who joined the filmmakers in a Q&A after the screening, teared up as she explained what it was like to watch the movie from the audience. “I’m full of emotions,” she said. “I promised myself not to cry, but that’s not happening. It’s hard not to keep your heart beating through all that pain that you have been through.”