No one else on this planet has accomplished what Venus and Serena Williams have. For the Williams sisters, their unmatched success in tennis is just the tip of the iceberg. And even that seems as if it should never have happened: for a pair of Black girls growing up in Compton, California, an elite sport that requires copious amounts of money, access, and time — in addition to plain old talent — shouldn’t have even been on their radar.

But as the crowd-pleasing new drama “King Richard” suggests, Venus and Serena’s parents were determined to give them (and their sisters) a better life and all the opportunities that comes with it. That drive and ambition, along with the family’s shared worth ethic, helped launch the pair into superstardom at a young age, ensuring that they will forever go down as two of the greatest athletes ever to live.

From the moment Venus launched her career in the early ’90s, her father, Richard Williams (portrayed in the film by Will Smith), was vilified and demonized as a crazed fanatic who was in over his head. “King Richard” dismantles all of these myths. Instead, what Smith presents is a man whose tenacity and determination enabled him to survive the horrors of the Jim Crow South. Richard Williams, along with the Williams sisters’ mother, Oracene “Brandy” Price (portrayed by Aunjanue Ellis), showed their daughters their power had no limits.

Still, as much as “King Richard” puts the titular character into focus, the film is also about sisterhood and family. Filmmaker Reinaldo Marcus Green knew that his film would fail to serve an ace without the perfect cast to stand next to Smith and Ellis. Who could possibly play these two young superstars-in-the-making? Well, perhaps the answer was simple: two other young superstars-in-the-making.

“[Executive producer Jada Pinkett Smith] was involved in the casting of the girls,” producer Tim White told IndieWire. “She came to the girls’ final casting and makeup tests, where we brought in a couple of different options.”

Pinkett Smith, Green, and casting director Rich Delia were uncompromising in ensuring they had the right actors for the roles. There was a lot of pairing, mixing, and matching with various actresses. However, when Saniyya Sidney (as young Venus) and Demi Singleton (as young Serena) stepped into the room, they knew they had found the perfect pair. 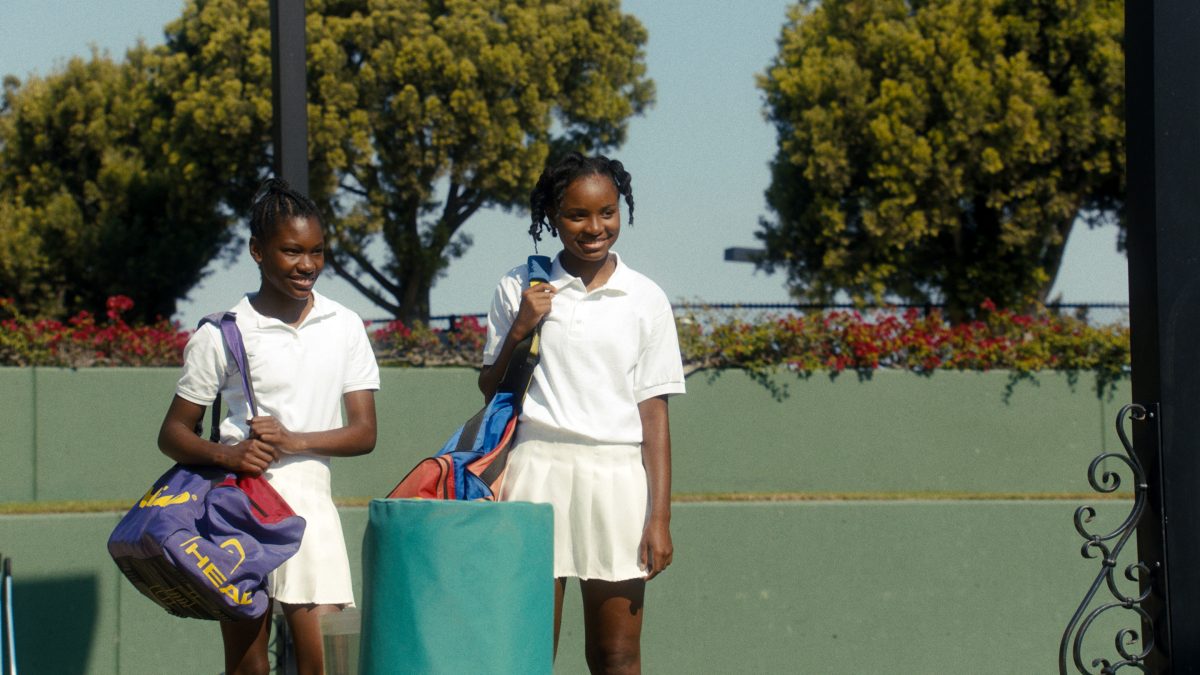 The teens were well-versed in the careers and legacies of the Williams’ sisters before their casting. However, Venus and Serena’s upbringing and their father’s infamous 78-page plan to make them tennis stars came as a bit of a surprise. “I knew that their father, Richard Williams, had a lot to do with their success, but I didn’t know just how much,” Singleton told IndieWire. “I also didn’t know that their entire family was involved.”

For Sidney, portraying Venus was an opportunity to get to know who the Williams sisters were off the court. “I saw them a lot on TV,” she said. “I was just really inspired by them because it meant so much to my family — the younger generation, seeing Black women taking over a predominantly white sport. They were just heroes to me.”

Once the actresses earned their roles, Singleton was determined to get to the truth of who Richard Williams is — and dispelling all of the myths and misinformation that has long been part of the family’s media-bolstered mystique. “When I got to learn a little bit more about his story, that’s when I realized how important it was that we did this, and we did this the right way,” she said. “His story’s been told several times by several different people, and it hasn’t always been the truth. I feel like it was our job to finally tell his story and give him the freedom to live.”

Before they even read their first lines, Sidney and Singleton — who had never played tennis before —had to perfect their swings and serves. “We spent a lot of time on making sure the tennis looked good, Tim [White], especially coming from his world,” Trevor White said. Tim White added, “Pro tennis players need to feel this is real. We spent a lot of time developing the plan and how to do it.”

For the actresses, that meant hours upon hours of work on the court. “The tennis training was a lot,” Singleton said. “It was hard. I feel like both of us were just so honored to help tell the Williams family story. So all the pain, and the soreness, and anger within myself for not getting it right, I feel like it all worked out in the end, because we finally came out with something that’s amazing.”

Sidney was also thrown into tennis headfirst. “I was just like, ‘Oh, God, this is a lot harder than I thought,’” the “Fences” actress said with a laugh. “I remember thinking, ‘Oh, my God, I did so good.’ But the more often I think about it, I did so bad.”

Once the mechanics of tennis were mastered, Singleton and Sidney began bonding with Smith and Ellis so their close connections would be immediately apparent on-screen. “They’re just genuinely great, humble, and kind people,” Sidney said. “They really made working so much fun. They taught us both so many lessons, life lessons, career lessons. It was really helpful. It’s just great to know that you have people that you can trust and that respect you while you’re working.”

When it came to embodying Venus Williams, Sidney got the unique opportunity to settle into the character through her iconic beads and braids hairstyle. It was a style that defined Black girl joy in the ’90s, that will forever be associated with the Williams sisters.

“It’s funny, because when I was little, my mom never let me have beads because she said it was too loud,” she said with a laugh. “The first time sitting in the chair and doing the hairstyle, I was just like, ‘Oh, my gosh.’ It was like we were reliving history. It was just a surreal moment. It was very emotional because Isha Price came in the trailer, Demi was there, almost everybody was there. It helped me get into character even more, but then getting to have to play with [the beads] was totally different.”

The Williams sisters’ older sisters, Isha Price and Lyndrea Price, were both on set as producers and consultants to aid in any questions the actresses had. And for Singleton and Sidney, having the opportunity to meet with Venus and Serena in real life was astonishing.

“When Serena and Venus came to set, we were so excited because we had no clue that they were coming,” Singleton remembered. “We were a little bit nervous, or a lot bit nervous. When we spoke with them, it was just like, ‘Oh, they were just normal people. They’re kind, and they’re humble.’ It was cool to get to see them interact with each other firsthand because we see on the internet, or everywhere else, that they’re really close and best friends. But it was cool to be able to see that in person. When they first started playing tennis, I learned that Serena was only playing tennis because Venus was playing tennis. That was something that I didn’t know.”

Sidney was also thrilled to interact with the tennis legends in person. “We just got to see their hearts and who they are as women,” she said. “They’re such humble people as well. How they were when they were kids is exactly how they are today. It was good to see them have that sisterly bond in real life. To see it for your own eyes.” 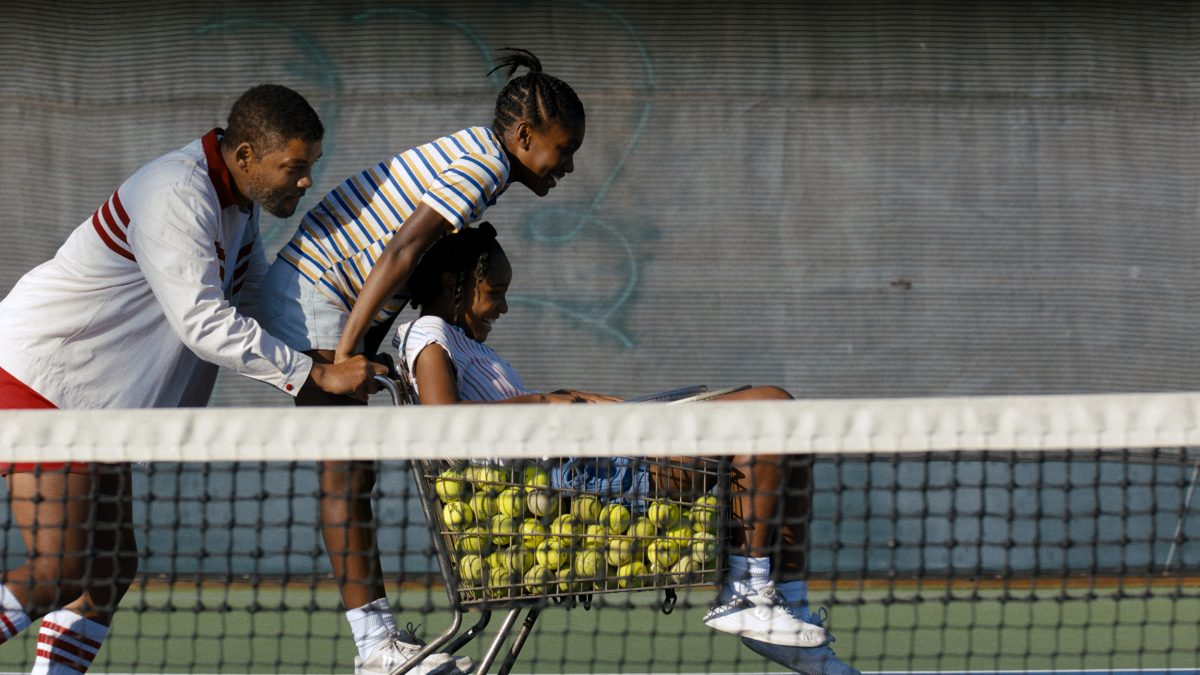 Though the actresses were emulating the bond between Venus and Serena, they also formed their own sisterhood, one they shared with Mikayla LaShae Bartholomew (playing Tunde Price), Danielle Lawson (cast as Lyndrea Price), and Layla Crawford (as Isha Price). “We went and hung out together,” Sidney said. “We did so much. We would have a lot of rehearsal time, and we would all be in character, so we got used to being in the mindset of Venus and Isha, Richard and Tunde, and everyone. That’s something we did to stay consistent in our relationship with one another.”

The opportunity to embody two Black women who have shaped history forever has been an experience that Singleton won’t soon forget. “I’ve just learned so many things, and that’s helped me grow as an actress, but I’ve also grown as a person,” she said. “I’ve gained more confidence in a way. I think a big part of it has to do with playing Serena Williams. I learned to be patient with myself, and I would tell myself, ‘This is not easy. You’re learning to play like the greatest of all time, just stay calm, and you got this.’”

For Sidney, the work that she put in and the efforts made during filming made the final product even more rewarding. “You start the movie when they were like nine and 10, and then you see the evolution of them turning into young women,” she said. “I was the same age as Venus toward the end of the movie. I surprised myself a lot, and I was very proud, and there were many times when I would go above and beyond to a place that I didn’t know I was capable of. It felt good to challenge myself. Mr. Will made sure we had that every day. We had to earn many things on set; he didn’t just give it to us. That’s what Venus and Serena had to do with their dad.”

She added, “They earned a lot of stuff. So that’s what I did.”