Mary Berry has explained why her new show isn’t like MasterChef.

The former Great British Bake Off judge will return to TV screens in May with her new show Britain’s Best Home Cook.

Presented by Claudia Winkleman and described as “the ultimate immersive cooking competition”, the series will see ten contestants living and cooking together while competing to win the title of Britain’s Best Home Cook.

Each week, the contestants will be set challenges that test their skill, creativity and individual flair, before culminating in a final elimination round to decide who will leave the show.

But don’t get confused: this definitely isn’t MasterChef. At least, according to Mezza B.

“Do you know what’s different about this show, there is nobody running about clearing up after them or wiping the surfaces,” she said.

“You see nobody there but the actual cooks and they’re responsible for everything, just as they would be at home. I think the simplicity of it, because all we want are the best home cooks. We don’t want complicated recipes or too many ingredients because they’re not achievable. 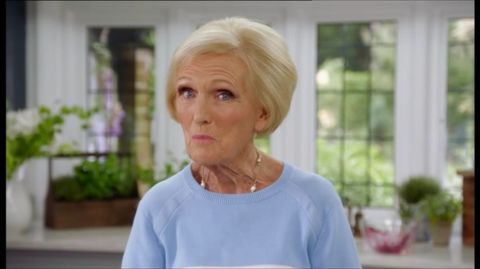 “If you think of your friends who cook, the people that cook the most amazing meals are not necessarily frightfully complicated, they are often very simple things beautifully done, and every texture, flavour and sauce is just sheer perfection.”

Alongside Mary Berry and Claudia Winkleman, the show will also feature Chris Bavin, aka The Naked Grocer, and Dan Doherty, the Chief Director of the Duck and Waffle, as judges.

Britain’s Best Home Cook will premiere at 8pm on Thursday, May 3 on BBC One.

A Live-Action 'Spider-Verse' Movie? Fans Want It — But Not Yet