Mike White’s agent was not thrilled to learn that he was disappearing off the grid for another reality TV adventure. The filmmaker, who had previously appeared on “The Amazing Race,” had finally achieved his dream of competing on “Survivor” — but that meant being completely unreachable for more than a month.

“It’s so funny, they’re literally the last to know,” White said of his reps at UTA. “You’re not supposed to tell anyone but I told my boyfriend and my parents that I’m leaving. And literally a day before I leave, I gotta call my agents — and they’re not going to be happy about this.”

Once you’ve entered the game (which is shot in Fiji), there’s no exiting it — and just because White already knew Jeff Probst from Hollywood circles, it didn’t mean that he borrow the host’s phone to check voicemails. And indeed, White’s UTA agent did try to track him down when a job offer came up during his “Survivor” absence.

“One of my agents just never got it,” he said. “And she was trying to figure out how they could get me on the island. And I was like, if they pull you to take a call, they’re pulling you out of the game. It’s over. I got back and got these messages, ‘Tracey Jacobs almost pulled you from the game to find out if you’d do a rewrite for this Paramount movie.’ I would have literally killed myself — and killed her!”

Despite all that, it was a dream fulfilled for White, who had persistently hounded “Survivor” producers for years to let him on the show. 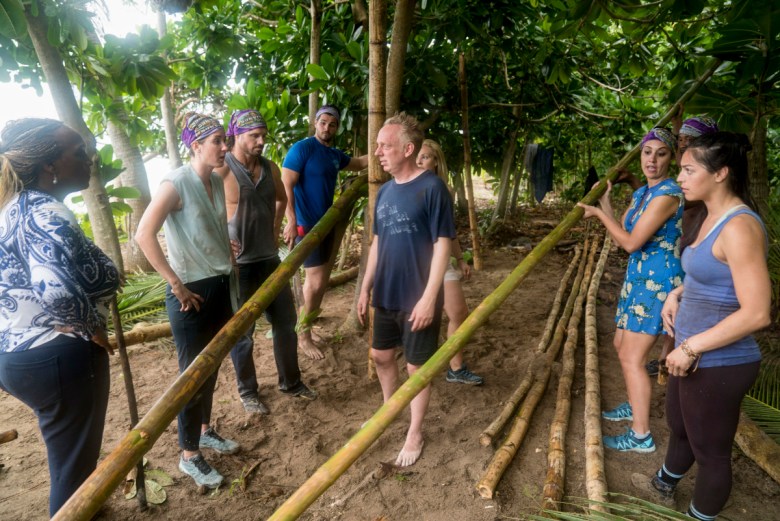 Mike White with the Goliath tribe on “Survivor”

“The truth is I was a ‘Survivor’ fanatic from the beginning,” he said. “‘The Amazing Race’ always looked more fun to me, you’re traveling. ‘Survivor’ in a way a more fun show to watch but it looked like it would be more hellish to do. But after watching around 35 seasons, my philosophy is, don’t just be a spectator be a participant. It took a while for me to convince them. But I was down to do it for years.”

The powers that be behind “Survivor” are generally loathe to cast contestants who have previously been on other shows, including “The Amazing Race.” (“I think ‘Survivor’ doesn’t want to take anyone’s sloppy seconds,” White said.) And they also weren’t sure about White’s motivation, given that he didn’t need the show’s cash prize. But he eventually won them over.

“I was constantly putting my hat in the ring,” he said. “I had to stay for a week at the Sheraton Universal, which I think was the hardest part of the process for me. Because I was stuck on the Universal lot for five days on lockdown. I just had to go through the same process as everyone else — all the auditions and the different cuts. They definitely didn’t recruit me.”

Now in its 37th edition, this fall’s “Survivor” cycle is themed “David vs. Goliath.” That means the castaways who make up the “David” tribe have overcome adversity in their lives, while the castaways on the “Goliath” tribe come with individual advantages — which means White, given his Hollywood successes like “School of Rock” and “Enlightened,” made him a fit there. 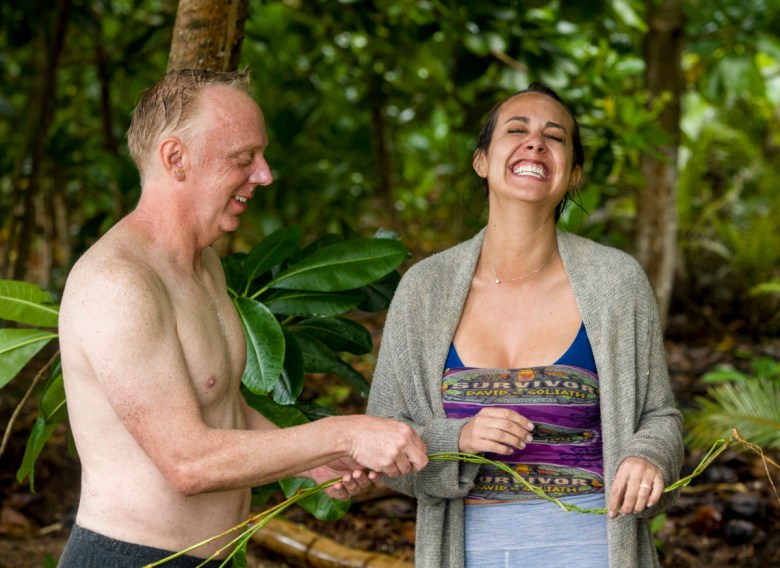 “I think part of it was, they wanted me to show through the process that I really wanted it, and I would put up with the humiliation that a lot of contestants put up with,” he added. “I think that’s where they realized, ‘OK he really wants this and wants to do well in the game.’”

Adding to the unusual nature of White’s casting: The fact that he and Probst have been friendly, with White even playing a role in convincing Probst and the show’s producers to do away with the show’s “Redemption Island” gimmick.

“If I can corner him and give him my two cents and tell him how big a fan I am, that is what started the relationship,” White said. “The thing about Jeff is he is very interested in people’s reactions to whatever season he’s doing. He wants feedback. People he knows who are fans of the show he’s always testing the waters on different ideas. That’s been the majority of our conversations. It’s one thing to know him in life, but to be a contestant on the show is a whole different thing. It’s like a psychologist meets camp counselor meets some kind of guru deity.

“Every contestant wants Jeff’s approval and some affirmation from Jeff. I was no different. I haven’t had conversations with him since we left. It will be hard to go back… my heart will always race a little faster when I see Jeff around.”

Having now done both shows, White said he does sense a friendly rivalry between “Survivor” and “The Amazing Race,” given their origins around the same time as long-running CBS competition shows. “‘The Amazing Race’ wins the awards, and ‘Survivor’ has better ratings,” White noted. ” I cannot believe how much work goes into both productions. As a producer, I have so much respect for both shows as what they’re able to pull off. And the integrity of the game. Both shows, there’s so much pride. They have a lot of integrity about letting the game play out as it is. And believing that by not interfering it will produce the most interesting results. I can’t overstate how impressed I am.” 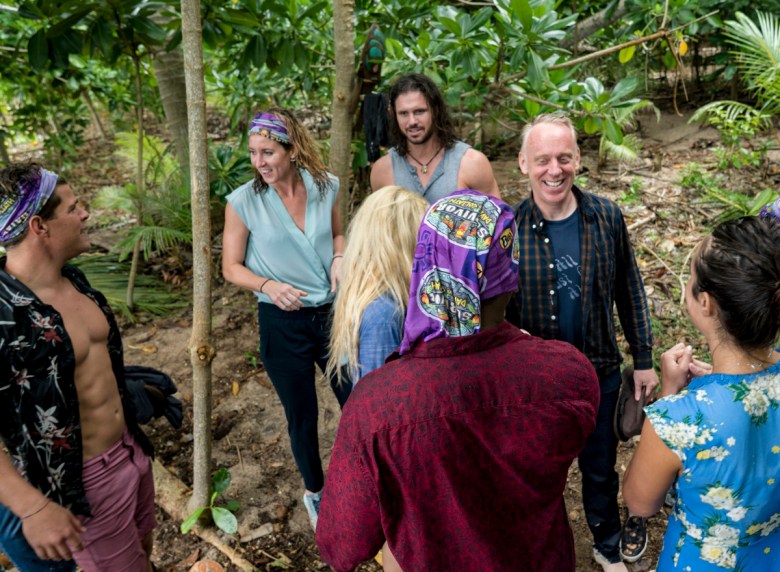 Mike White and the Goliath tribe on “Survivor”

Ultimately, White said he found “The Amazing Race” to be the more stressful show, given the amount of running around and luck that’s required, while “Survivor” is more brutal, given the physical challenges and psychological games.

“People who play ‘Survivor’ will be more haunted by the experience than someone who plays ‘Amazing Race,’ he said. “‘Amazing Race’ feels more frenetic. It’s also more condensed. You’re delirious within three days. ‘Survivor,’ you have a lot of time to sit and stew in your juices.”

Like all “Survivor” contestants, White is required to remain tight-lipped about how he did on the show — although he did reveal that his game play had to be different than most, given that he was likely to be recognized rather quickly.

“It seems like over the years people who were slightly notorious, they get targeted pretty quickly,” he said. “I needed to figure out how to make myself seem harmless. We’ll see.”

But White does give high marks for the “Survivor” experience living up to expectations. “For whatever reason, there is such a pure immersive quality to the game and I didn’t know if I was ever going to be fully in the game. I wasn’t sure if I’d get past the ‘Truman Show’ part of it,” he said. “You start playing the game an hour in. You just end up being totally immersed in the game part of it. And that is the thrill of it. The paranoia, all of that really happened. So few things live up to the hype. Those moments where I was playing, I was 100 percent stimulated by the game of it. As someone who likes to play games, it couldn’t have been more fun.”

White, who viewers may notice lives up to his last name, said he was also careful with being out all day in the sun.

“I have had multiple skin cancers in my life and I didn’t even want to tell my dermatologist that I was going, because I figured she would say no and put the kibosh on it,” he said. “So I’m pretty paranoid about it. I’m one of the only people who came back from Fiji more pale than when I left. I don’t know if that says anything about how I did in the game!”

Now that he’s back home, White has jumped right back into work. He just shot the film “The One and Only Ivan” for Disney, and next has the Universal animated film “Migration.”

“And hopefully I will direct soon or go back to TV… when I get the energy to do it,” he added.

'Fresh Prince' Cast: Response to Reunion Special Is 'Like a Big Hug'

Will Young And Pregnant's Kayla Move Back Home — Or Stay With Luke?