With her first dramatic feature since 2010's remarkable Winter's Bone (which launched Jennifer Lawrence's career), the American independent filmmaker Debra Granik accumulates details about a traumatised former soldier and his 13-year-old daughter, Will (Ben Foster) and Tom (Thomasin McKenzie), with a sparse, granular precision. The pair live off the grid in the forests of the Pacific Northwest, and the way they farm and cook their food or train for discovery by outsiders completely illustrates their dynamic. At one wintry point Will hugs Tom and you understand that he is simultaneously passing on warmth, expressing his love, and stopping his daughter from physically leaving. Granik sets the pair's troubled journey back into society against marginalised spaces and alternative communities, focusing on how Will and Tom deal with a world that tries to help them instead of manufacturing a menacing adversary to heedlessly unite them. As a coming of age tale it is sparse, bittersweet and desperately powerful – change is pulling these two interwoven lives apart, made explicit by Granik's empathy and unerring eye. 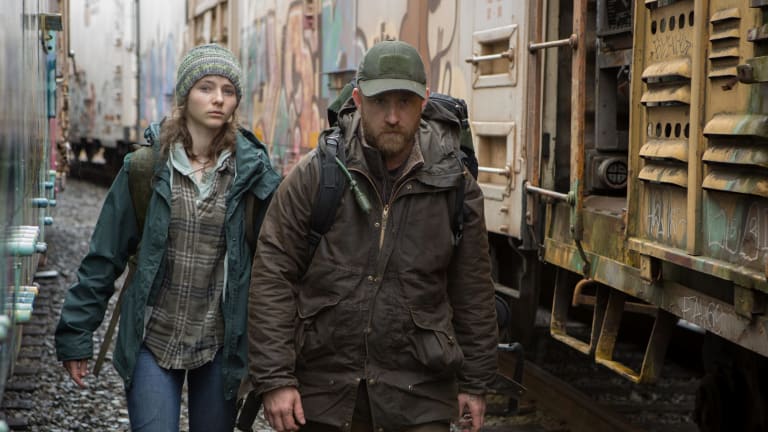 BEYOND LEONE: THE RADICAL LAWLESSNESS OF THE SPAGHETTI WESTERN
melbournecinematheque.org. Australian Centre for the Moving Image, Wednesdays, August 22 and 29, and September 5.

Sergio Leone is the first filmmaker you associate with the spaghetti western, but the director of 1964's A Fistful of Dollars and 1965's For a Few Dollars More should not be the last. This Melbourne Cinematheque season spotlights the movies that in the wake of Leone's iconic collaborations with Clint Eastwood furthered the genre's radical revisionism. Notable is Sergio Corbucci's 1968 feature The Great Silence (3½ stars, M, 105 minutes), a snowbound depiction of institutionalised amorality. "I'm sorry, but it's our bread and butter," bounty hunter Loco (Klaus Kinski) tells the mother of a minor outlaw he's gunned down, and the savagery on this Utah frontier extends to the mute Silence (Jean-Louis Trintignant), who takes revenge on the bounty hunters where the law won't. There's the constant of an Ennio Morricone score, but the mix of long lens picking out distant figures and the zoom-in to close-up gives the cruel deprivation a roiled, distinctive aesthetic that extends all the way to the pessimistic finale.

Blessed with defiance and a survivor's instincts, 88-year-old Abraham Bursztein (Miguel Angel Sola) does not intend to go quietly into the night. Deposited into a Buenos Aires nursing home by his children, who have already sold the family home, the Polish-born Holocaust survivor instead absconds to Europe, with the aim of making his way to Lodz and reuniting with the person who kept him alive during the murderous Nazi occupation. Argentinean writer/director Pablo Solarz has weighted the now familiar cinema concept of a sprightly senior citizen's last stand with the memory of what Abraham escaped, and he intersperses the episodic journey – which takes in a little arousal and an encounter with a 21st century German – with flashbacks to the world Abraham once knew, or at least how he remembers it now. The film is laden with emotion, but comes by most of it naturally through the clash of circumstances and the knowledge of what a life can contain.

After being the only African-Aussies in town, I say make rural life a choice