Two of the most outrageous teen dramas in TV history are officially one. Sort of.

Thursday’s episode of Pretty Little Liars: Original Sin sends a few of its characters to Rosewood, the setting of the original PLL, in their ongoing quest to unmask “A.” But their research inadvertently uncovers something arguably more earth-shattering: this show takes place in the same universe as Riverdale.

While interrogating Eddie Lamb — the first character from the original PLL to appear in this new series, albeit played by a different actor — the Liars learn that several patients from Rosewood’s Radley Sanitarium were “sent to the Sisters of Quiet Mercy over in Riverdale” when the facility became a hotel. Anyone who watches The CW’s gritty Archie drama should recognize the Sisters of Quiet Mercy as a home for “troubled youths” run by a group of corrupt nuns.

The question is: Does this really mean that Pretty Little Liars and Riverdale share a universe? And the answer is…

“I guess it does,” executive producer Roberto Aguirre-Sacasa, who also calls the shots on Riverdale, tells TVLine. “We kind of just wrote that line in. I assumed that we wouldn’t be allowed to reference Riverdale, since it’s in a completely different universe, but it stayed in. So, yeah, I guess it does exist in the same universe. Bailee [Madison] gives a great look when that’s mentioned. That was obviously just a fun Easter egg in an episode with the biggest Easter egg of them all, which is going to Rosewood.”

If you’re itching for a more concrete crossover between the shows, you’re not alone.

“Alex [Aiono], who plays Shawn, is obsessed with the idea of a rivalry between the Millwood High Steppenwolfs and the Riverdale Bulldogs,” Aguirre-Sacasa says. “I would love for there to be a football game between them. Who knows, though. If we did push it further, I don’t even know how far we’d be allowed to push the shared universes. It would great, though, that’s for sure.” 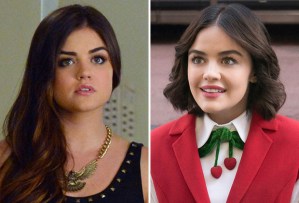 And what of Lucy Hale, you ask? In addition to starring in the original Pretty Little Liars as Aria Montgomery, she also played the title role in Katy Keene, a direct spinoff of Riverdale. No promises, but EP Lindsay Calhoon Bring would “love a world where all of the shows come together, and Lucy Hale is in duplicate playing Katy Keene and Aria.”

But wait, there’s one more hiccup: In this same episode, Tabby refers to Ash as looking “like a teen Cole Sprouse,” which means — you guessed it — “both Riverdale and Cole Sprouse exist in the Pretty Little Liars universe,” Aguirre-Sacasa concedes. “It’s a multiverse!”

If you’re still with us, your mind is probably blown right about now. But given that Pretty Little Liars has already dabbled in the supernatural (via Ravenswood, which is canon!), who’s to say what’s too far anymore?

Your thoughts on this wholly unexpected connection between PLL and Riverdale? Drop ’em in a comment below.

Is Ariana Grande Going To Teen Choice Awards 2018? Why She’s Skipping The Show This Year

Deepest Swimming Pool in the World Opens in Poland