More than a dozen Australian education providers for overseas students have been identified as allegedly “corrupt” by state and federal investigators probing the movement of women from Asia to Australia to work in the sex industry, including at brothels linked to illegal sex rings.

The Australian Criminal Intelligence Commission was involved in the investigation that identified the suspect colleges. It was sparked by a probe into a nationwide criminal network linked to Melbourne brothel 39 Tope. 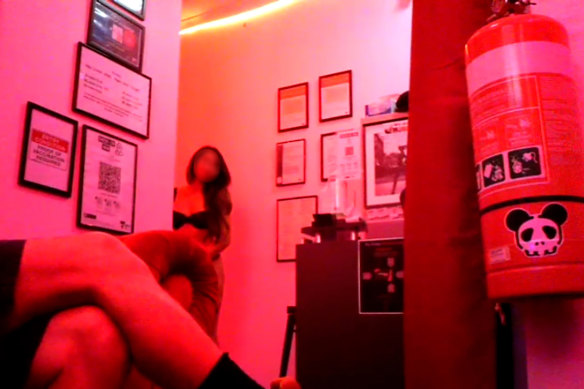 Brothels across Australia have been linked to trafficking.

The colleges identified as “corrupt” helped more than 190 South Korean females enter Australia to work in the sex industry, including at 39 Tope and other brothels across the country, according to analysis seen by this masthead.

Some of them were recruited overseas by an illegal sex syndicate led by Australian crime figure Mae Ja Kim as recently as December 2018, according to one inquiry.

The inquiry is one of several confidential probes by policing agencies that have never resulted in criminal charges, but have generated extensive information about the way Australia’s immigration system is being scammed by organised crime syndicates.

Several serving law enforcement officers, who confidentially briefed the Trafficked investigative series, said the role of Australian-based overseas student education providers in helping crime syndicates had been a persistent problem for border security officials. The providers supply student visas for foreign nationals who don’t intent to study and instead join what experts have called an “underclass” of exploited foreign workers.

Trafficked is a project led by The Age, The Sydney Morning Herald, 60 Minutes and Stan’s Revealed documentary program that has exposed the wholesale exploitation of Australia’s border security and immigration system by criminal syndicates involved in human trafficking and other crimes.

None of the 14 Australian colleges identified as corrupt have faced criminal sanction and most remain open.

In a statement, the Department of Home Affairs said the overseas student education sector, along with the agents who recruit students and help arrange visas, are monitored by the Tertiary Education Quality and Standards Agency and the Australian Skills Quality Authority. Colleges and agents are required under the law to act with integrity.

Trafficked can also reveal how investigators have uncovered the systemic rorting of the English language testing system meant to protect the integrity of Australia’s immigration system.

One federal investigation targeting a Chinese organised crime syndicate run by a suspected prolific English language test rorter has uncovered how the network has helped hundreds of foreign nationals obtain Australian visas fraudulently over the past decade, many of which have subsequently been cancelled.

English language tests are used by the Australian government to assess if foreign nationals are eligible for a range of different visas.

The suspected boss of the “English test rort” crime syndicate is a Sydney man who has reaped multi-million dollar profits by facilitating suspect visas over multiple visa streams. They include skilled visas, student visas, business sponsorship visas and the “golden ticket” high-wealth investor visas that Home Affairs Minister Clare O’Neil this year acknowledged were at risk of abuse.

The syndicate advertises on Chinese language websites, boasting of having facilitated “many successful applications over the last few years” and promising “personalised migration packages for clients” seeking to gain permanent residency in Australia.

“The fastest time to obtain PR [permanent residency] is three months, which will save you much time and effort,” one online advertisement states.

The crime network boss has continued to operate despite the Department of Home Affairs stripping him of his migration agent’s licence in 2016 after implicating him in the rorting of English language tests.

Official sources said that after being denied his licence, the boss has continued to operate his visa scam business, working with a large network of migration fixers to obtain visas by fraudulent means.

Visa applicants are suspected to pay the fixers up to $200,000 to arrange for others to sit the English language tests they must submit as part of their visa applications, or, to create a false relationship or business sponsorship visa case. English testing centres overseas and in Australia have been corrupted by syndicates, according to official sources.

In a statement, the Department of Home Affairs said it had a “Deed of Agreement with each of the test providers, which outlines requirements such as candidate identity verification, reporting, and score verification processes”.

This week, Trafficked revealed how border security failures had enabled a sex-trafficking boss jailed in Britain to set up a suspected trafficking operation in Sydney; how federal government licensed migration agents suspected to be engaged in falsifying visa applications had retained their government licences; and how multiple Australian education providers were created to facilitate endemic visa rorting.

In response to the revelations, O’Neil and Immigration Minister Andrew Giles said an investigation had started after an urgent meeting on Monday of the heads of the Australian Border Force, Home Affairs and the Australian Federal Police.

Will the £150 council tax rebate in April affect my Universal Credit or benefit payments?

Kelly Ripa: Every Date With Mark Consuelos Is Like Being in High School

Boba Fett Will Be In Star Wars: The Mandalorian Season 2 – Report

Who is Tej Lalvani, what is the Dragons' Den investor's net worth and what is his company Vitabiotics?