Australia’s ocean forest is among the most productive ecosystems in the world, rivalling that of the Amazon rainforest, a global study led by a team from The University of Western Australia has discovered. 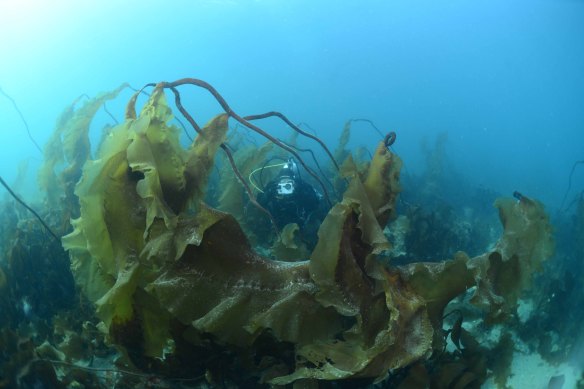 One of the study’s UWA authors Karen Filbee-Dexter swimming among Arctic kelp in an undiscovered area of the Eastern Canadian Arctic.Credit:Ignacio Garrido

The most productive oceans hailed from the Great African Sea Forest along Africa’s southern tip and Australia’s own Great Southern Reef, encompassing the bottom third of the nation.

“We found that, unlike on land where forest productivity peaks in tropical rainforests, productivity in the sea peaked around temperate regions, which are usually bathed in cool, nutrient-rich water,” Dr Pessaradona said.

The forests grow two to eleven times faster than many crops cultivated today, such as wheat, corn or rice, they found.

Australia’s neighbour Indonesia reaps the benefits in their seaweed aquaculture on land, with seeds extracted from the ocean forests.

Their mass production assists in the world’s future food security, even producing products like ice cream, and can alternatively be used for bioplastics or biofuel.

The ocean forests absorb large quantities of carbon dioxide from the atmosphere, which could aid in the mitigation of climate change by sequestering some of the carbon.

Kelps, the brown seaweeds forming the forests, can reach 35 metres tall as they capture this carbon, along with the sun’s energy, just like terrestrial rainforest.

“This creates this complex, multidimensional structure, that then is a habitat for many other species,” Dr Pessarrodona said.

He said the global project was no easy feat.

“On land, we can use satellites to measure tree growth, but underwater things are much more complicated as most satellites cannot make measurements at the depths kelp forests are found,” he said.

To combat this issue, scuba divers’ productivity studies from across the globe were compiled to model how productivity changed with variables like nutrients, temperature, light and wave exposure.

Dr Pessarrodona said the conditions underwater where the most productive African and Australian forests existed allowed their rapid growth.

“Usually these temperate regions where you have this cool nutrient-rich water is where you find the most impressive and the most exuberant ocean forest,” he said.

The two forests were found to produce up to four times more biomass than the crops cultivated today.

The real reason the Lizzie McGuire reboot is on hold

Pensioner, 83, who was jailed for playing Classic FM too loudly at home dies in prison