Yet another tawdry saga for the Blairs: After her husband Tony’s questionable business links, Cherie, warrior for social justice, is advising a secretive firm selling hacking software to the world’s most repulsive regimes, writes IAN BIRRELL

Cherie Blair says she is a passionate feminist and dedicated human rights lawyer who exploits her connections, skills and status to make the world a better place.

‘I want to use my energy and my voice to raise as much awareness and generate as much social change as I can,’ she declared in one interview, adding that ‘working towards women’s economic empowerment’ was the single most important battle.

It all sounds laudable. How strange, then, to discover that this self-proclaimed warrior for social justice advises a secretive Israeli firm that sells nefarious hacking software allegedly used by some of the world’s most repulsive regimes to spy upon their foes. 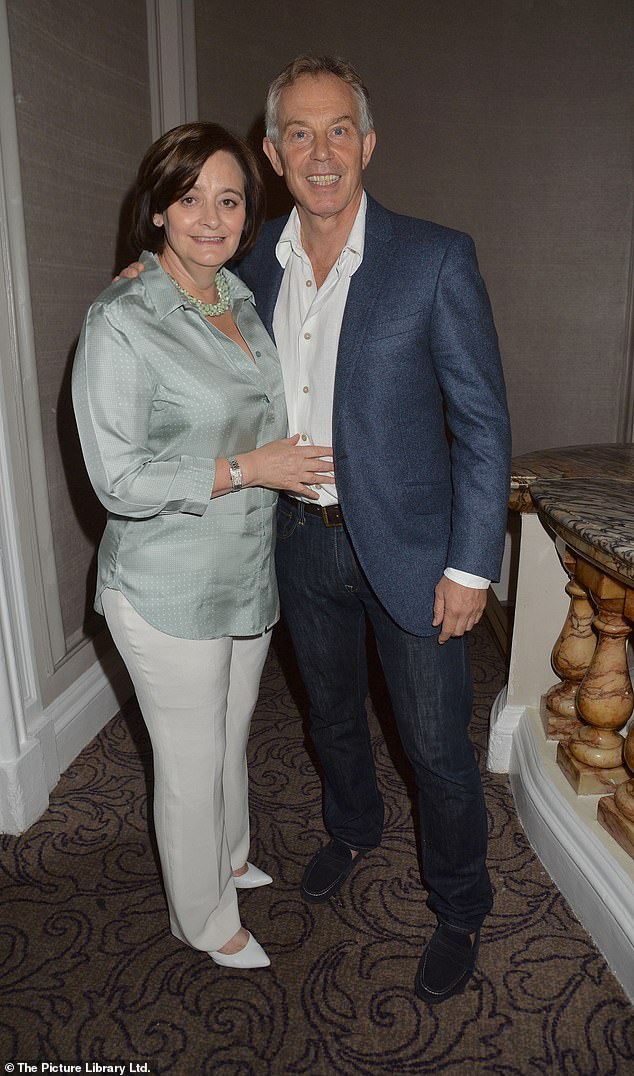 Cherie Blair QC, pictured with her husband, former PM Tony Blair, right, received a tip off from a company she represents that a leading divorce lawyer and her client’s mobile phones had been hacked by military grade software

This week, a High Court Judge ruled that this sinister spyware has been used by Dubai’s potentate Sheikh Mohammed Bin Rashid Al Maktoum to hack the phone of his former wife, Princess Haya, who fled to Britain with her two children.It was even used to listen in on and monitor the phones of her lawyers – one of whom, Baroness Shackleton sits in the House of Lords.

The sordid details heard by the High Court also revealed that the horse-loving friend of the Queen orchestrated the armed kidnap of his runaway daughter from Cambridgeshire in 2000. Elsewhere, Tony Blair’s government was accused of interfering with a police investigation into the abduction, although the Foreign Office has denied any involvement.

The sheikh allegedly abducted Haya’s sister Latifa when she too tried to escape his clutches in Dubai.

To her credit, it was Cherie Blair who apparently blew the whistle, informing Fiona Shackleton of the hack after being instructed to by the Israeli firm NSO, for which she is an ‘ethical adviser’. She explained that the firm was very concerned about this suspected ‘misuse’ of their software, and had quickly taken steps to protect the phones of the princess and her lawyer.

Of course, lawyers are not responsible for the errors of their clients. Nevertheless, many will see it as a scandal that the wife of a former Labour prime minister, an avowed feminist and human rights crusader, has been linked to the reported hacking of a member of British parliament as well as a terrified princess who sought sanctuary in Britain from an abusive feudal ruler. And it is not the first time that the Blairs’ choice of clients has caused controversy. 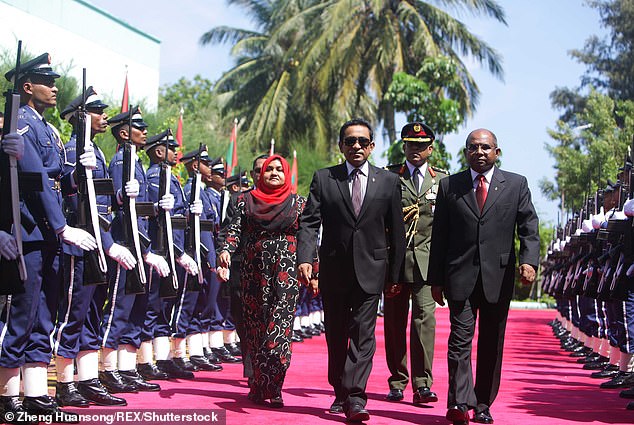 This newspaper exposed how her firm demanded £420,000 for six months’ work for Abdulla Yameen, the Maldives president who presided over a kleptocratic government notorious for systematic violations of democracy and human rights

Cherie is, admittedly, no match for her husband who has advised bloodstained monsters such as hideous Rwandan dictator Paul Kagame while hoovering up a fortune as he tours the world pontificating about good governance.

But former judge Mrs Blair, too, has pocketed hefty sums by working with shady regimes around the world. In fact, the legal firm she founded in 2011 was famously reported to have raked in hundreds of thousands advising Kazakhstan, a country with a dire human rights record, in 2014.

This followed her husband’s multi-million pound deal in the same country giving its president Nursultan Nazarbayev advice on how to make sure that the shooting dead of protesting workers by the police and military did not soil the nation’s image.

Mrs Blair also lobbied her friend Hillary Clinton, who was serving as US Secretary of State under President Barack Obama at the time, on behalf of the Qatari royal family – leaders of a Sharia state where homosexuality is punishable by imprisonment or flogging, migrant workers are routinely abused and women’s rights are severely curtailed. 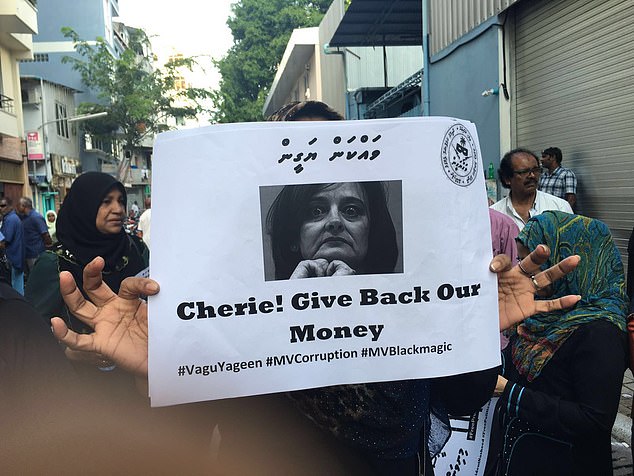 This newspaper exposed how her firm demanded £420,000 for six months’ work for Abdulla Yameen, the Maldives president who presided over a kleptocratic government notorious for systematic violations of democracy and human rights.

In 2016 Yameen was sentenced to five years in prison for money-laundering two years ago, while last year his vice president was given a 20-year jail sentence after pleading guilty to embezzlement, claiming to be under orders from the former president.

And now, on top of all this comes the distasteful revelation of Mrs Blair’s work for a firm whose technology has been used by a terrifyingly repressive regime at the heart of a global spying scandal.

Friends of Mrs Blair frequently explain her focus on money as financial insecurity, the legacy of a challenging Liverpudlian background after her father, the actor Tony Booth, abandoned the family when she was just eight.

Given the family’s wealth and extensive property empire, however, this seems now a rather threadbare excuse.

Certainly it has been a bad week for the Blairs after another huge dump of financial data over the weekend disclosed that the couple avoided paying £312,000 in stamp duty by buying a £6.45 million London property through a firm in a Caribbean tax haven. 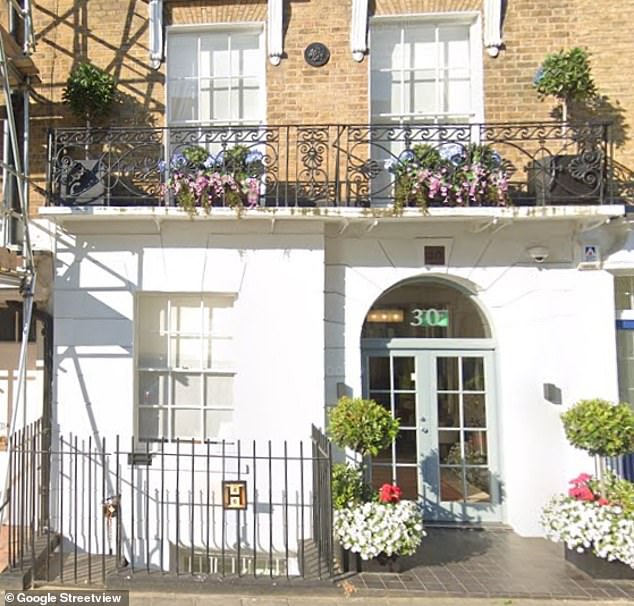 Certainly it has been a bad week for the Blairs after another huge dump of financial data over the weekend disclosed that the couple avoided paying £312,000 in stamp duty by buying a £6.45 million London property, pictured, through a firm in a Caribbean tax haven

Ironically this four-floor Marylebone building houses Omnia Strategy, Mrs Blair’s legal advisory firm that has been working for NSO, which has faced accusations of terrifying technology abuses in addition to those reported this week. Pegasus’s alleged victims include presidents, prime ministers, human rights activists, business leaders and journalists in at least 50 countries around the planet.

Perhaps most notable among them is journalist Jamal Khashoggi – who was tortured and brutally murdered on the order of Crown Prince Mohammed Bin Salman.

The firm, of course, insists it sells its spyware only to ‘vetted governments’ in order to hunt down gangsters and terrorists.

It told the High Court that its contracts make clear the technology can only be used by government and law enforcement agencies to investigate ‘serious crimes and terrorism’.

The firm also confirmed that it had terminated its contract with the UAE, after learning of the suspected misuse.

It says that it hired Mrs Blair’s firm to help demonstrate its determination to preserve and protect human rights.

But many will surely feel that the idea she really does care passionately about freedom, human rights and gender equality is brought into serious question by her links to this firm and its terrifying technology.

Salvador Dali sculptures worth up to $600,000 stolen from Swedish gallery

Why is Rudy Giuliani 'farting' trending?

Argentine students who traveled to Cancún tested positive for COVID-19