Couple threatened with fine when their Golf GTI was caught speeding… while they were 1,500 miles away on holiday in Spain

A couple were baffled when they were threatened with prosecution after their Golf GTI was caught speeding – while they were over 1,500 miles away on holiday in Spain.

Gary Thornburn and Clare Beards left their car at the meet and greet at Manchester Airport on August 3 before travelling to Murcia in southern Spain for 13 days.

The couple from Leeds were shocked when they received a prosecution notice after returning to the UK on August 16.

The letter, which dated from August 10, said their white Golf GTI was caught driving at 55mph in a 30 zone along Alan Turing Way in Manchester.

Pictures showed a car with the same number plate committing the offence on August 5 – two days after Gary and Clare left their car at the airport. 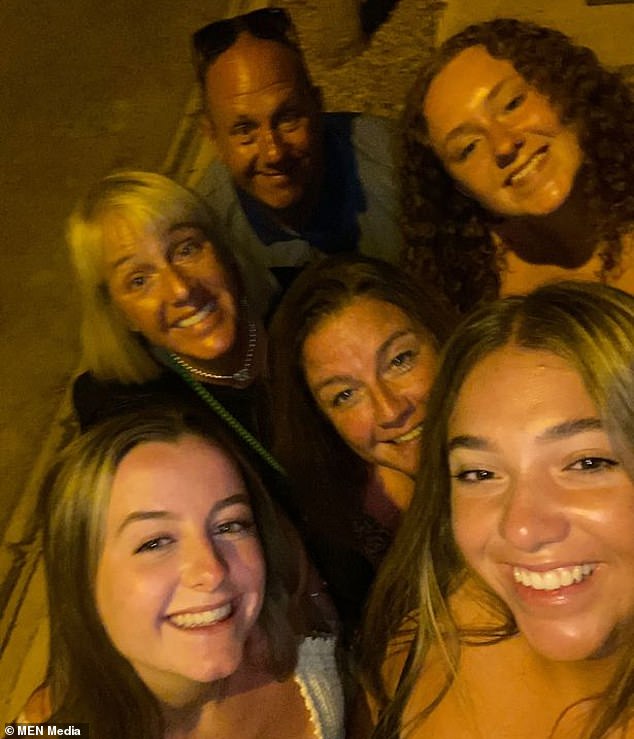 Gary Thornburn and Clare Beards (pictured at the back of the photo) were baffled when their Golf GTI was caught speeding while they were over 1,500 miles away on holiday in Spain

Manchester Airport said the car remained at the safe compound by meet and greet staff for their duration of the trip so couldn’t have been used to commit the offence.

They added that the key was stored securely and the car must have been a different one.

Gary told the Manchester Evening News: ‘I knew they take the cars off site to somewhere else but you don’t think you’ll be accused of speeding 11 miles away from the airport.’

‘We opened the post and my wife came in and said I had a speeding fine from the August 5 but I said it can’t have been either of us as we were away then.

‘We had dropped the car off at Terminal 3 on Wednesday 3rd at around 10pm. I knew they would transport it elsewhere to a safe location. We used the official meet and greet firm as we wanted to make sure the car was looked after because it was very expensive. 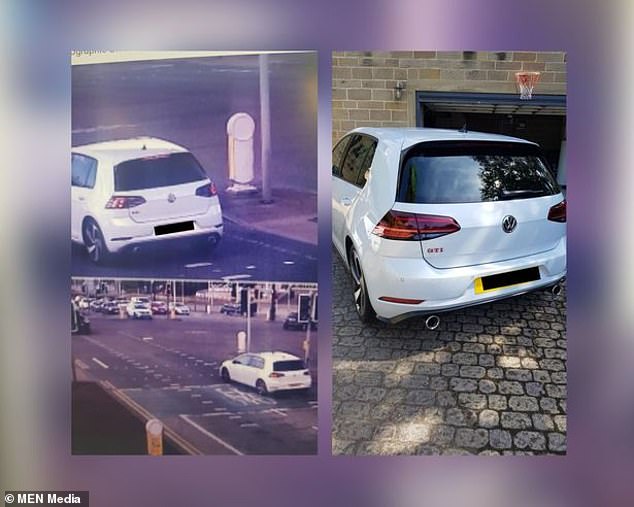 The image on the left shows a car with the same registration plate committing the offence; on the right is Gary and Clare’s white Golf GTI

‘I wouldn’t have ever thought somebody would’ve been driving around in it going at such a speed. It’s a criminal offence and extremely dangerous going 55mph in a 30 zone.’

They contacted the police to tell them they were in Spain and couldn’t have been driving the car when the offence was committed.

They are waiting to hear back. 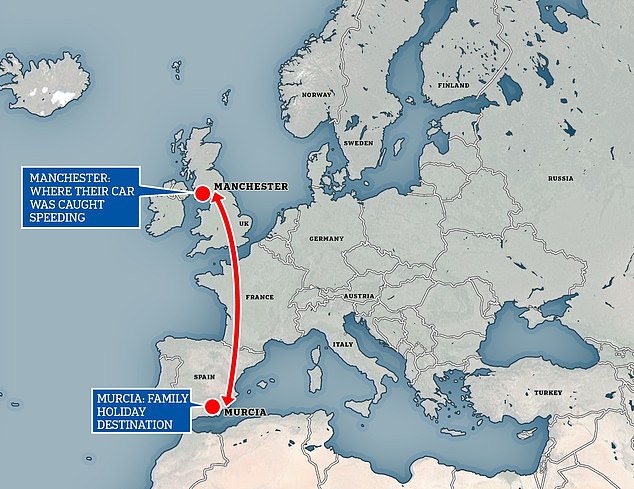 A spokesman for Manchester Airport said: ‘We are aware that a customer who booked Meet & Greet car parking at Manchester Airport has received a notice of intended prosecution from Greater Manchester Police, which relates to an alleged speeding offence that took place while they were on holiday.

‘We understand this would be distressing for the customer concerned, and launched an immediate investigation after being notified.

‘This investigation has indicated the car that was booked in with us remained in a secure storage area until it was collected by the customer on their return.

‘The key to the vehicle was also securely stored throughout.

‘Further investigations indicate the vehicle shown in the speed camera image is different to the one that was left with us.

‘While the customer concerned has not made a complaint to Manchester Airport, we have made several attempts to speak with them directly, in order to share our findings and remain eager to do so, as well as assisting the police in any enquiries they wish to make into the matter.

‘We want to assure customers that there are a number of strict security measures in place to monitor the whereabouts of vehicles left with us and ensure they are kept safe at all times.’

Microsoft Outlook: Are you struggling with ‘cannot send’ email error? We have good news