Do public sector workers earning £32,000 really have to rely on food banks? It’s the claim union leaders keep making to justify strikes – and Left-wing media lap it up. LEO McKINSTRY examines the evidence

Endlessly repeated across the airwaves in tones of outrage and despair, it has become one of the cliches of the industrial unrest that has gripped the public sector.

No trade union can announce a further round of strike action without the now-obligatory claim that its members on the state payroll are now so badly paid that they are forced to use food banks.

In the rhetoric of the militants, the alleged dependency of increasing numbers of ambulance workers, civil servants, nurses and firefighters on charity is aggressively deployed as both a justification for the walkouts and an indictment of Tory rule.

Only this week, the mighty 400,000-strong National Education Union voted for a series of stoppages in February, prompting Labour front-bencher David Lammy to argue that ‘teachers have to go to food banks because they cannot afford to get by’. Even police officers, who are barred by law from striking, have joined the chorus of anguish, with the Met Commissioner Mark Rowley saying in a radio interview he was ‘concerned’ that low pay is forcing some officers down this path. 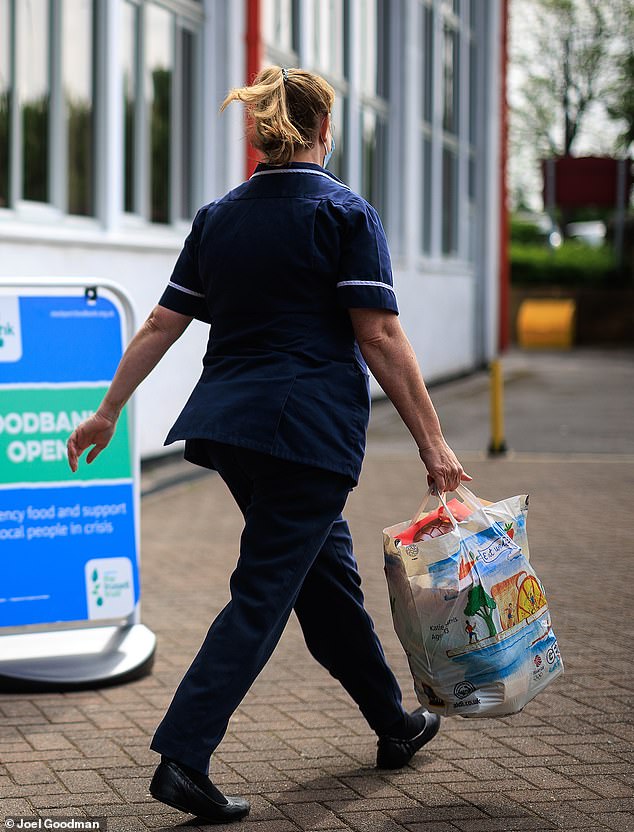 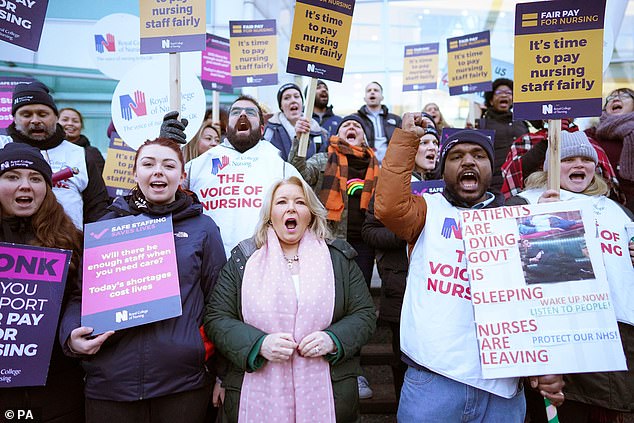 Only this week, the mighty 400,000-strong National Education Union voted for a series of stoppages in February, prompting Labour front-bencher David Lammy to argue that ‘teachers have to go to food banks because they cannot afford to get by’.

In the present climate of emotional blackmail fostered by the unions, any challenge to this narrative is painted as a form of cruelty. But that has not stopped a couple of brave Conservative MPs from voicing their concern about the trustworthiness of all this propaganda.

This week, Simon Clarke, the former Chief Secretary to the Treasury, dared to criticise the Royal College of Nursing (RCN) for its assertions that poverty pay is compelling its members to resort to food banks, pointing out that nurses earn considerably more than most British workers.

‘If you are using food banks and your average salary is £35,000 a year, then something is wrong with your budgeting because £35,000 is not a salary on which you should be relying on food banks. This debate has got out of hand,’ said Clarke.

Inevitably, he was vilified for his remark. Amid denunciations from striking nurses for his supposed arrogance and cruelty, Pat Cullen, the RCN’s leader — who is readily deployed by the Left-wing media to ramp up the victimhood narrative — described Clarke’s comments as ‘disgusting, heartless and dangerously out of touch’.

Yet for all this vituperation, Clarke had a point. If a salary of £35,000 is not enough for the basic necessities of life, then most of the British population would be reliant on food banks, which is patently not the case. 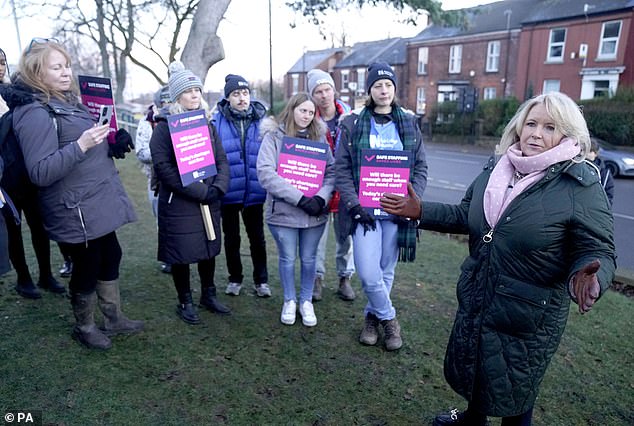 Even police officers, who are barred by law from striking, have joined the chorus of anguish, with the Met Commissioner Mark Rowley saying in a radio interview he was ‘concerned’ that low pay is forcing some officers down this path

However, the unions now seem addicted to their exaggerated tale of woe, even though many public employees actually enjoy decent rates of pay, as well as better pensions, longer holidays, greater job security and shorter hours than a lot of people in the private sector.

Just last month, the hard-Left Fire Brigades Union (FBU) was at it, tweeting that ‘many ordinary firefighters, on £32,244, are forced to use food banks’. According to the FBU, this figure — which refers to the average, basic salary of a qualified professional — is simply too low, given the cost of living.

That is why the union has rejected a ‘derisory’ pay offer of 5 per cent from employers and is presently holding a ballot of its members for strike action.

But, like Simon Clarke, fellow Tory MP Brendan Clarke-Smith, a former teacher and now MP for the former Labour seat of Bassetlaw, was having none of it. ‘I respect the profession but £32,244 and using a food bank? Never heard such a ridiculous thing in my life,’ he tweeted, adding, ‘I earned a lot less than that for most of my teaching career and so do many of my constituents. If true, which is unlikely, I suggest learning how to budget and prioritise!’

Inevitably, this also provoked synthetic fury at Westminster and on social media. The reality is that the bleak picture of public sector desperation has been grossly overdone for political ends.

That is not to say that the deprivation faced by many households — including those headed by public service workers — isn’t real.

Surging inflation and rising energy bills have had a brutal impact on all wage earners, especially those at the lower end of the scale, many of whom have no savings and struggle to make ends meet. Nurses have seen their real, take-home pay fall significantly since 2010, while it is estimated that 45,000 of the government’s own workforce have to claim in-work benefits because of low pay.

Yet, there is a danger of exaggerating the problem, and this is where emotional blackmail becomes a political tool. Among the unions, some of the claims truly stretch the bounds of credibility.

The Public and Commercial Services union asserts that no fewer than 40,000 civil servants are using food banks, while 135,000 of them ‘are skipping meals’. In the past, nursing representatives have said their members have been forced to eat leftovers on patients’ plates because they can’t afford a packed lunch.

One nurse called Esther told the Daily Mirror: ‘I go without meals. Lunch, sometimes breakfast. You cannot go and buy a hot meal at work. It costs £6 to £7. Sometimes you have to grab extra sandwiches from the patients’ trolleys. It is common to take leftover food.’

Recently, Pat Cullen was moaning that some members can’t even afford shoes for their children. Other public workers are still worse off. A headline on the Independent website in 2019 claimed that because of low earnings, ‘teachers are living in sheds, cars and using food banks’.

At times, this competitive anguish is reminiscent of the famous Monty Python sketch in which four self-made Yorkshiremen try to outdo each other with tales about the destitution they endured in their childhoods. ‘We lived in a rolled-up newspaper in a septic tank,’ ran one typical line.

But the unions are overplaying their hand. Our economic problems are serious enough without this kind of lurid hyperbole. A dose of realism is needed.

To pretend that a vast army of state employees is on the verge of the abyss is actually ridiculous. Take the firefighters’ case. The median salary for a competent firefighter is £35,428, 15 per cent above median earnings, while in London a leading firefighter can earn up to £42,000, and a station officer almost £50,000. The argument is even more absurd when it is considered that most firefighters —because of their flexible shift patterns — are able to hold down second jobs.

Similarly, the lowest-paid police officer in the City of London — where the local police federation has ostentatiously set up a food bank — is on £37,665.

As the Health Secretary Steve Barclay recently pointed out, experienced paramedics earn around £47,000 a year. That may be worth less because of inflation, but it’s hardly a level that requires visits to the food bank. One recent study showed that when taxpayer-subsidised pensions are taken into account, nurses’ real earnings outside London average £50,000 a year.

What’s more, the claims about food bank usage often crumble under scrutiny. In 2017, a nurse called Claire Austin took part in an election debate on Scottish television, during which she wailed, ‘I can’t manage on the salary I’ve got. I have to go to food banks.’

Yet her social media profile had pictures of her drinking champagne in the five-star Plaza hotel during a luxury trip to New York, along with other photos of her attending foodie festivals and enjoying meals at top restaurants. According to a Scottish newspaper, it was ‘believed that her daughter attended a private school where the fees are more than £11,000 a year’.

The balloon of self-serving victimhood has already been inflated too far. Embellishing the seriousness of the workers’ plight does no good, especially not for the real cases of poverty. Indeed, such a practice is an insult to those who are really living on the breadline.

Most public sector workers are not in the front line of the oppressed proletariat and, in the long term, the misleading union propaganda will only create disillusion, most notably from private sector taxpayers who have to bankroll the whole system and are often worse off.

The fashion steals from Asda, Tesco & other supermarkets to snap up on your weekly shop & prices start from only £4