Will the King of woke kill off the Queen of fashion? He wants to make Vogue ‘genderless’. She wants it to remain the style bible for women. As the battle hots up, will Edward Enninful manage to topple Anna Wintour?

The rare smile that flashed across the face of legendary American Vogue Editor-in-Chief Anna Wintour at Victoria Beckham’s Paris fashion show on Friday was too remarkable to go unnoticed. That it was directed at the man who sat just a few seats away, British Vogue’s Editor-in-Chief Edward Enninful, was even more intriguing.

For while Ms Wintour must have hoped that the gesture would convey a sense of unity, behind the glossy pages of the fashion bible is a growing froideur between the magazine’s grand dame and her former protégé, the first black and openly gay man to get the top job.

Indeed, playing out in the shadows is what one magazine insider has described as ‘a fight not only for the crown of Vogue but for the very heart and soul of the magazine itself’. 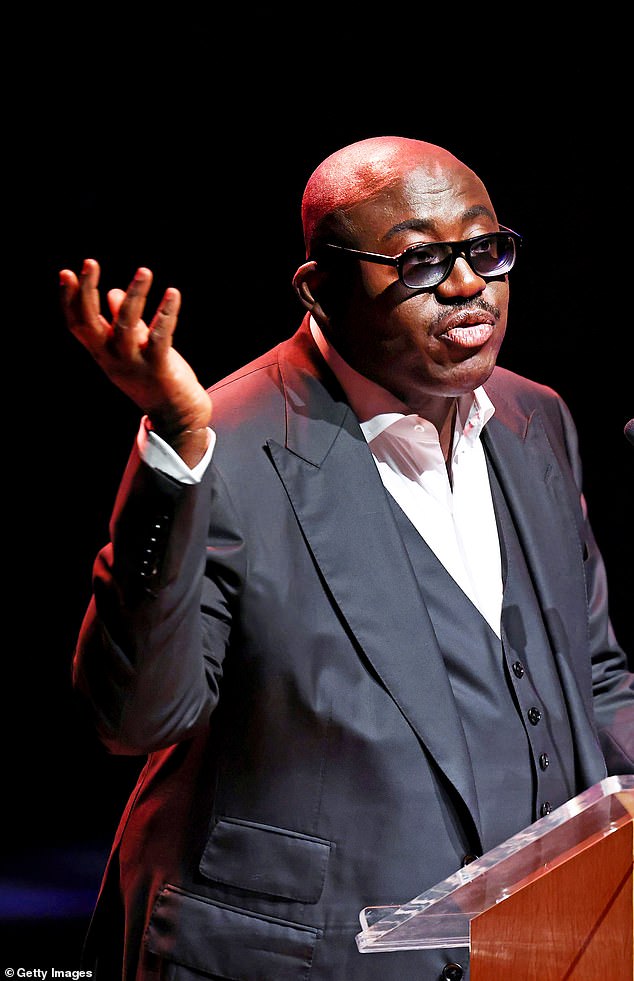 Enninful is driving the most radical and controversial changes in the magazine’s 130-year-old history: an audacious bid to make Vogue more diverse and even ‘genderless’ – a departure from its traditional female base

At the centre of it all is Enninful himself, who is driving the most radical and controversial changes in the magazine’s 130-year-old history: an audacious bid to make Vogue more diverse and even ‘genderless’ – a departure from its traditional female base.

The latest decision to raise stylishly bushy eyebrows was the inclusion of Oscar-nominated actor Timothée Chalamet on the latest cover, making him British Vogue’s first male cover star. Enninful is said to be ‘keen’ to land Ncuti Gatwa, the first black Doctor in Doctor Who and star of Netflix’s Sex Education, as his next cover star.

‘He wants to appeal to everyone, not just women,’ a source confided to The Mail on Sunday. ‘To him, the future is a genderless, multicultural Vogue that appeals to everyone and excludes no one. Gay men have always bought the magazine but he wants to attract everyone and reach out to an audience who would not traditionally buy a women’s fashion magazine.’

What that means for those faithful to Vogue’s female-led brand of high fashion remains to be seen. As one observer put it: ‘At its heart, Vogue represents glamour and aspiration for women. If you stop it being a women’s magazine, you destroy its soul.’

But at the moment, it seems there is little that can slow Enninful. Since the 50-year-old, who arrived in the UK from Ghana aged 13, took over the helm of British Vogue five years ago, there has been constant speculation that he is being lined up to take over Wintour’s job as Editor-in-chief of American Vogue and Global Chief Content Officer of the magazine’s publisher, Conde Nast. 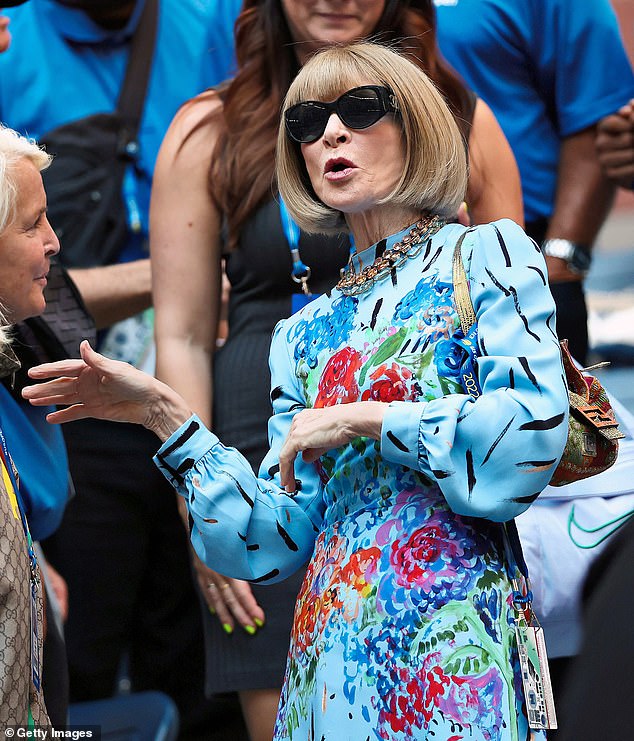 Since the 50-year-old, who arrived in the UK from Ghana aged 13, took over the helm of British Vogue five years ago, there has been constant speculation that he is being lined up to take over Wintour’s job as Editor-in-chief of American Vogue and Global Chief Content Officer of the magazine’s publisher, Conde Nast

A source said: ‘There have been plenty of pretenders to the throne but Edward considers himself her natural successor and he is the only person who appears to be a real threat.’

Yet even in the famously waspish world of fashion he has been branded a ‘diva’, and has earned himself the deliciously catty soubriquet ‘Edward Enninfulofhimself’.

Also bitchily referred to as the ‘Queen Mother’, he is said to have much in common with his mentor. One US outlet has alleged he has ‘assistants [who] lead him around through meetings and carry his glasses and eye drops and help apply them’.

His admirers say that no one ever calls him the ‘Queen Mother’ and that he needs eyedrops because his eyesight is so bad it borders on being a disability.

Reports also suggest he waves off colleagues with simple requests by asking them to ‘call Darnell’ [his powerful agent, Darnell Strom].

And his differences with the formidable Wintour – whose famously demanding personality has earned her the nickname ‘Nuclear Wintour’ – suggest he is made of stern stuff.

In the US, reports of the growing rift between the magazine empire’s two most influential editors burst into the open this week with several outlets seemingly ‘briefed’ about the simmering tensions.

‘Anna Wintour’s Feud With Her Protege Is Turning Conde Nasty’ read one headline in an article which alleged that Enninful is ‘apparently gunning for the Iron Lady of Gloss’s plum job’ and has told associates he ‘believes he can do a better job than Wintour atop the Vogue brand’.

The publication speculated Wintour may try to ‘appease’ Enninful, who has spent recent weeks on a book tour promoting his memoir, A Visible Man, by manoeuvering him into another coveted position, perhaps the editorship of an alternative magazine in the Conde Nast stable, to protect her own job. ‘Anna is no fool, so people expect there to be musical chairs soon,’ said one source. 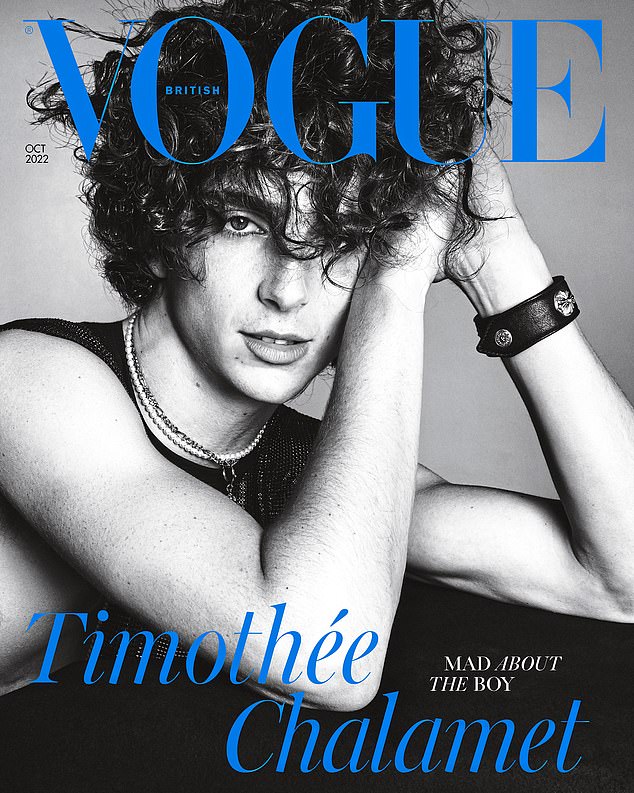 Tongues were wagging last month when Enninful was absent from a glamorous ‘Vogue World’ event in New York hosted by Wintour to showcase her vision for the magazine’s future.

A source said: ‘He’d been all over New York promoting his memoir so the expectation was he’d be there. The fact he was on annual leave and flying to California at the time has been a source of constant chatter.’

The pair also kept their distance in Paris this week despite the choreographed smiles at Posh’s fashion show. Enninful holed up at the Crillon hotel with his friend, Tatler Editor Richard Dennen, while Wintour took her favourite suite at the Ritz.

Meanwhile, just as intriguing, are signs that Wintour appears to have been taking a leaf out of Enninful’s book in a bid to stay with the times.

When he took over as British Vogue’s editor in 2017, it marked a radical departure from the magazine’s previous editor, the highly respected Alexandra Shulman, who’d held the post for 25 years.

Enninful was heard describing the office as having ‘too many old white posh women’. Several senior female executives were immediately replaced by men and women of colour, and with them a number of ‘young, cool and gay hipsters’. One of them is his protege Alex Kessler, a fashion editor who lists his pronouns as he/him.

Not to be outdone, Wintour was prompted to look at her own empire which had been criticised for being ‘white-centric’. Certainly since then she has sought to promote diversity and once famously looked around an editorial meeting and declared: ‘Why are there so many white people in the room?’

But if Wintour views Enninful as a threat, her supporters are not admitting it. Last night one said: ‘Everyone is making a big deal about Edward putting Timothée on the cover, but Anna put Harry Styles on the cover of American Vogue two years ago.

‘Anna is tough. She’s survived three decades at the very top of her game. She’s like the Queen, she will die in that job. She’ll never willingly hand it over.

‘Anna has been always very firm in her view of what Vogue should be; a fashion bible for women.’

But, it seems, Enninful is a man with a mission. He has also been on a major charm offensive in the States as he promotes his book.

In a profile in the New York Times, he spoke about his lifelong battle against racism, telling the now infamous story about how a white security guard at Vogue’s London HQ turned him away from the front door and told him to use the tradesman’s entrance.

Although the guard was fired, Enninful used the anecdote to illustrate the daily racism that he encounters, including having to ask a white staff member to hail cabs for him.

The piece gushingly described Enninful as ‘at the vanguard of a new cohort’ who ‘yanked open the fusty chintz curtains and displayed an aurora borealis of different races, sizes, ages and sexualities’.

He also quietly showed off his star power by handing the author of the New York Times piece a list of friends to contact which started with: ‘Beyoncé. Rihanna. Naomi. Iman. Oprah.’

A well-placed source predicts Enninful will remain undeterred in pursuit of his goals. ‘In public, he and Anna show nothing but respect for each other but there seems no doubt that he is gunning for her crown,’ the source said.

‘She may have tried to move with the times, and kudos to her for trying, but she cannot change the fact she is an old white woman.’

His value has been recognised within the company. Enninful now holds the title of European Editorial Director of Vogue as well as Editor-in-Chief of British Vogue, giving him control of influential Vogue editions in Italy, France and Spain. And, whatever he is doing, it’s working.

As Enninful told the New York Times: ‘You can still have diversity and keep the quality up,’ pointing to covers featuring Rihanna and Beyoncé and a special issue guest-edited by the Duchess of Sussex.

He has also gained powerful allies including Conde Nast publisher Si Newhouse’s wife Ronnie, who has known him since the 1990s when she was the creative director for Calvin Klein and he was the stylist for Kate Moss’s jeans campaign. Richard Dennen, clearly influenced by his colleague, now ensures every other Tatler cover features a person of colour.

As for Enninful, in public at least, he remains diplomatic. When asked by the New York Times if he ‘had ambitions to run the Vogue mothership’, he responded: ‘I’m happy working in Europe.

‘But you never know what the future holds.’