Peru’s former president Pedro Castillo could have been drugged and forced to dissolve Congress, it has been claimed, after he delivered a national address on Wednesday saying he intended to rule by decree.

Castillo ‘could have been induced’ by drugs and does not remember delivering the speech that led to his downfall, his former chief of staff said today.

The Peruvian Congress had been poised to debate Castillo’s impeachment on Wednesday on corruption charges, but ahead of the vote he announced his intentions in a televised speech, leading to his swift removal.

‘There are indications that the president was forced to read the message of dissolution, and whoever wrote the text did so in order to provide an argument for his removal,’ ex-aide Guido Bellido said on Twitter. 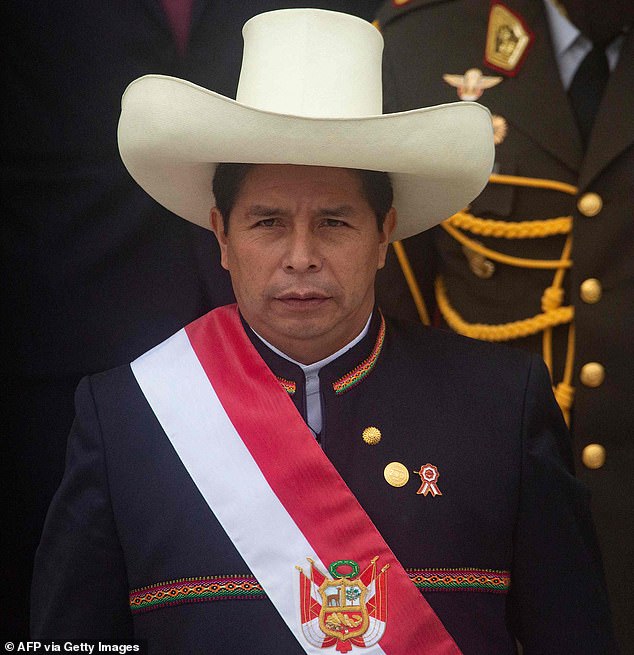 Castillo (pictured in 2021) ‘could have been induced’ by drugs and does not remember delivering the speech that led to his downfall, his former chief of staff said today 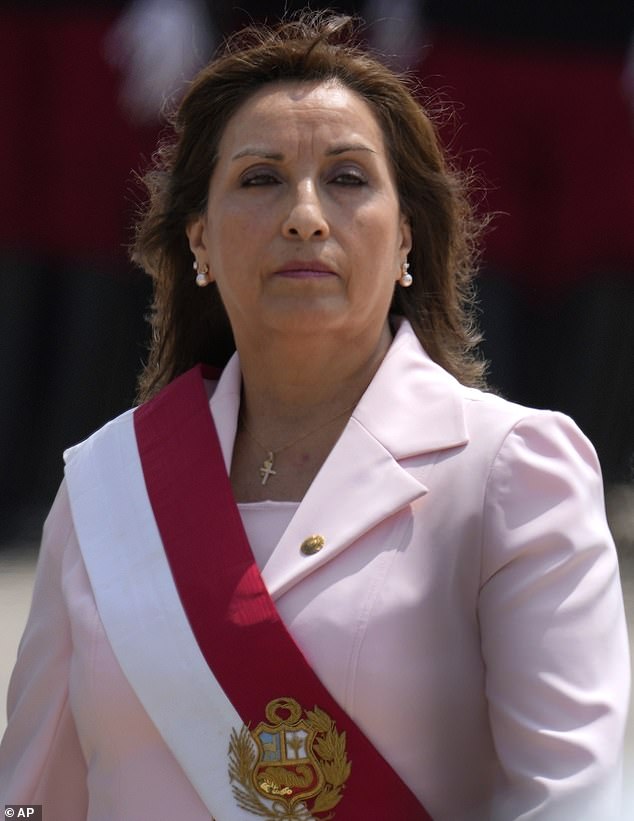 Peru’s new president is 60-year-old Dina Boluarte, who appeared in public at her first official event on Friday

It comes as the nation’s first female president, Dina Boluarte, appeared in a military ceremony today in her first official event as head of the government.

Castillo was overwhelmingly voted out this week by a count of 101 to six with ten abstentions.

He had announced he was installing a new emergency government and called for the next round of lawmakers to develop a new constitution for Peru.

During the address, he said he would rule by decree in the meantime and ordered a nightly curfew.

Castillo also said he would make changes in the leadership of the judiciary, police and constitutional court.

The announcement led to the head of Peru’s army resigning, along with four ministers – including those over foreign affairs and the economy.

Mr Bellido, who visited his former boss at the Lima police base where he is held while being investigated for rebellion and conspiracy, also questioned Castillo’s mental condition.

‘The psychological state of P. Castillo when reading the message to the nation shows that he was not in control of his faculties, this suggests that he could have been induced, a toxicological test is urgently needed,’ he said.

Mr Bellido, who was Castillo’s first chief of staff in 2021, posted a photo of Castillo in detention, with the message ‘Be strong, President, the people will free you.’

The suggestion that Castillo acted under the influence of drugs was also put forward by Guillermo Olivera, one of his lawyers.

‘When the former president read that message written by others, a few minutes before they had given him a drink, allegedly water, and that after drinking the water he felt stunned,’ Olivera told reporters from the detention center.

‘Everyone has seen that he was reading shakily, and I would hypothesize even further, that he was also a little sedated.’ 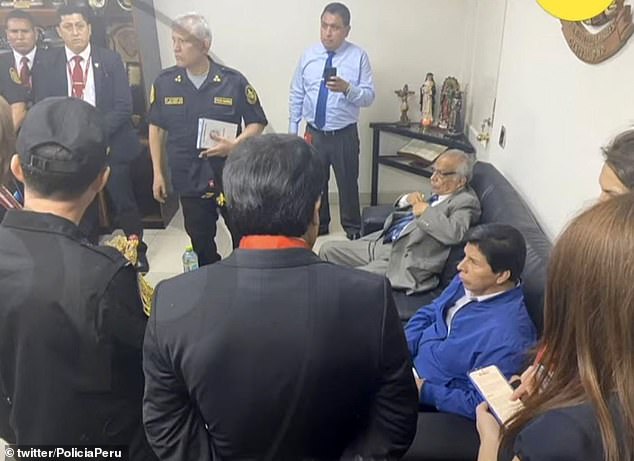 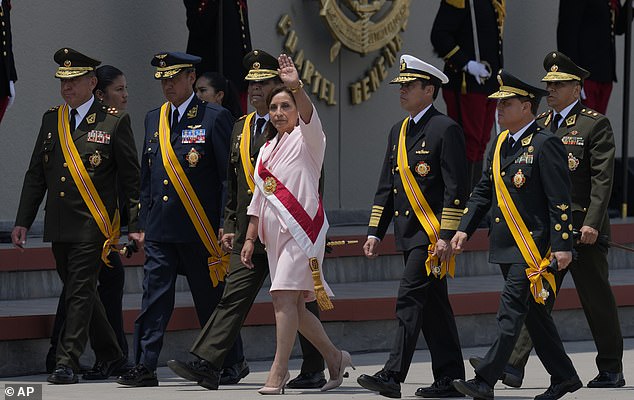 After being sworn in, Ms Boluarte called for a truce with legislators who dismissed Castillo for ‘permanent moral incapacity’

Peru was plunged into political crisis this week when leftist Castillo – facing a third impeachment bid – tried to dissolve Congress.

Lawmakers quickly gathered to vote him out of office, and Castillo was arrested on his way to the embassy of Mexico, which had agreed to give him asylum.

The former rural school teacher, who won a shock election victory over Peru’s traditional elites in June 2021, is being held in provisional detention for seven days.

Castillo has denied allegations of corruption against him, saying they’re based on ‘hearsay statements by people who, seeking to lighten their own punishments for supposed crimes by abusing my confidence, are trying to involve me without evidence’.

Dina Boluarte, 60, formerly the vice-president, replaced leftist Pedro Castillo as the country’s leader on Wednesday. She has said she should be allowed to hold the office for the rest of his term, which is more than three years.

But some politicians are already calling for early elections with more public protests planned.

Ms Boularte addressed members of the armed forces on Friday while flanked by the leaders of the judiciary and Congress.

After being sworn in, Ms Boluarte called for a truce with legislators who dismissed Castillo for ‘permanent moral incapacity,’ a clause of the constitution that experts say is so vague that it allows the removal of a president for almost any reason.

It was also used to oust President Martín Vizcarra, who governed from 2018-2020.

But political analysts have predicted a tough road for the new president.

A Boluarte government ‘is going to be very complicated, if not impossible,’ said Jorge Aragón, a political science professor at Peru’s Pontifical Catholic University. 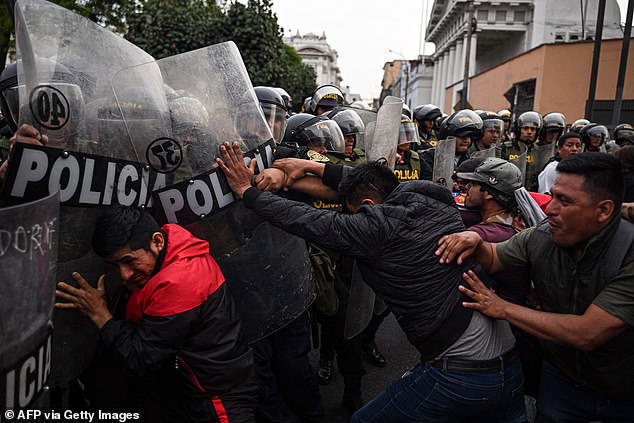 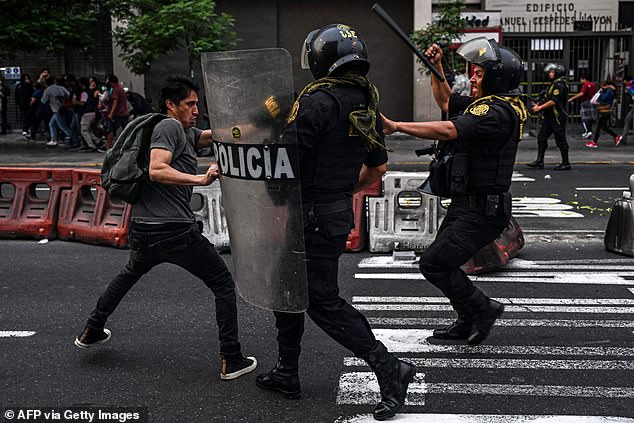 Former President Ollanta Humala, who governed from 2011-2016, noted that the new leader was not involved in politics or government before becoming vice-president.

‘She does not have the tools to govern,’ Humala told local media. He predicted that any truce with Congress ‘will last a month or perhaps more, but then the great problems of the country come upon her.’

Meanwhile the governor of the Cusco region, Jean Paul Benavente, demanded that the new president call an early vote, saying that would offer a ‘solution to the political crisis of the country.’

In the streets, small demonstrations by Castillo supporters continued in the capital and others parts of Peru, including Tacabamba, the district capital closest to Castillo’s rural home.

Protesters demanded that the ousted leader walk free, rejected Boluarte as president and called for Congress to be closed.

In Lima, protesters trying to reach the Congress building have clashed with police, who used sticks and tear gas to push them back.

One protester, Juana Ponce, said: ‘The only thing left is the people. We have no authorities, we have nothing.

‘It is a national shame. All these corrupt congressmen have sold out. They have betrayed our president, Pedro Castillo.’