Home » World News » Frail OAP, 71, collapsed and died 'after trying to break up street brawl' as three arrested on suspicion of murder

A FRAIL pensioner collapsed and died moments after trying to break up a broad daylight street brawl, it has been claimed.

The horrifying incident took place on Sunday afternoon, when Donald Cooke, 71,was caught up in a fight outside a church in Birmingham, West Mids, according to witnesses. 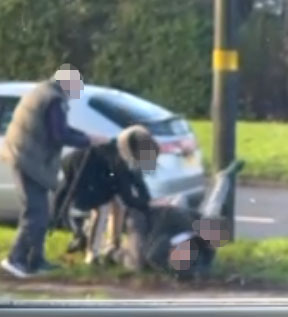 The 71-year-old suffered a fatal cardiac arrest shortly after passers-by intervened to stop the altercation.

Shocking video footage that the Sun Online has chosen not to show, reveals the momentMr Cooke was caught up in the brawl outside St Gabriel's Church, in the Bartley Green area of the city.

He can be seen approaching two younger men who are wrestling on the pavement and trying to break them up.

An eyewitness said Mr Cooke fell ill shortly after the brawl was brought to an end.

They told Sun Online: "The two men were going at each other and the old chap was trying to get involved with his walking stick. I think he was trying to tell them to stop and he got caught up in it.

"He struck at them with his stick a few times but he couldn't really do much. They weren't attacking the old man – they just kept moving him out of the way.

"They were rolling on the ground fighting and eventually the members of the public came and broke it up.

"The old man looked quite distressed. He was bent over on his hands and knees and clearly struggling for breath.

"One of the two lads lowered him on to the floor and then lay him in the recovery position."

Neighbours on Shenley Lane called for emergency back-up shortly after 12.30pm over the fight. When officers arrived they found Mr Cooke in need of urgent medical help.

Paramedics arrived and attempted to resuscitate him but he died at the scene.

A resident said: "When the fight went on more people came out of their house to try and break it up.

"No-one was really focussed on the older man. But when he was on the floor people realised something was wrong.

"The police and paramedics both tried to revive him but there was nothing they could do. It's just really sad."

“That includes who was involved, what roles they played and why they were fighting.

“We know there was a fight and passersby seem to have tried to calm the situation down. If you were one of those people and haven’t yet spoken to us, please get in touch.

A spokesman for West Midlands Ambulance Service said: On arrival we discovered one patient, a man who was in a critical condition.

"Ambulance staff immediately began administering advanced life support but sadly, despite their best efforts it became apparent nothing could be done to save the man and he was confirmed dead at the scene."

Did you spot this very rude subtitle clanger during Princess Eugenie's wedding?