Australia’s 215 biggest industrial polluters will have to cut their net emissions by 30 per cent by 2030 under details of the policy revealed on Tuesday, adding binding targets to the former Coalition government’s “safeguard mechanism”. 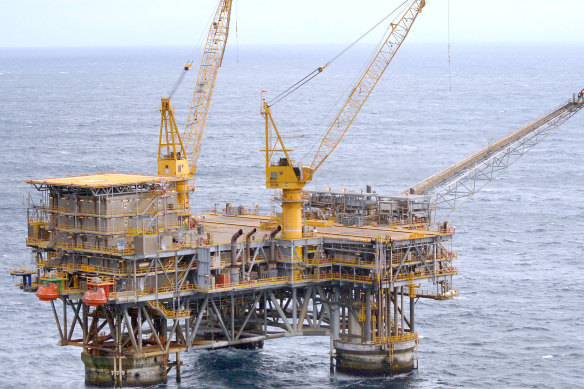 ExxonMobil’s Gippsland offshore gas plant is one facility that will have to cut net emissions by 30 per cent by 2030. Credit:ExxonMobil

Industrial sites that emit more than 100,000 tonnes of carbon a year are captured under the mechanism. In the 2021 financial year that applied to 212 facilities, which emitted a total of 137 million tonnes.

Victoria was home to 18, accounting for 6 million tonnes of carbon emissions – just over 8 per cent of the national total.

ExxonMobil’s Gippsland Basin gas project was the heaviest Victorian emitter on the 2021 list, followed by Viva Energy’s Geelong oil refinery, one of two plants in Australia producing petrol, diesel and LPG. ExxonMobile shut down its Altona Refinery, the fourth-biggest emitter on the list, in August 2021.

Electricity generation accounts for half of Victoria’s annual emissions, but the state’s three remaining coal-fired power plants are not counted individually under the safeguard mechanism.

Industry groups have broadly welcomed the scheme for giving businesses certainty after years of climate policy inertia, but operators of the Victorian facilities affected said they would need more details before backing it.

Beach Energy chief executive Morné Engelbrecht said: “While there is still more detail required before Beach can fully understand any direct impacts to our business, we are already actively pursuing the policy objectives through emissions-reduction activities”.

An Alcoa spokesperson said the aluminium maker also needed more time to review the government’s plans, but the emissions-reduction pathway aligned with Alcoa’s own plan for net-zero emissions by 2050. The company welcomed the government’s support for “emissions-intensive, trade-exposed businesses”.

Export businesses can apply for grants totalling $600 million to help pay to decarbonise their operations, the government said.

A spokesman for Viva Energy said the company was still reviewing the policy and would make a submission.

Climate campaigners and the Greens have taken aim at the scheme for allowing companies to meet their emissions targets by buying carbon offsets rather than forcing them to cut pollution.

The Climate Council’s head of advocacy, Jennifer Rayner, said it would “encourage a whole bunch more tricky carbon accounting instead of the genuine transformation of these businesses that we need”.

Victoria contributes about 17 per cent of Australia’s emissions, the third-highest state behind NSW and Queensland, which are home to more carbon-intensive industries.

ExxonMobile did not respond to a request for comment.

“A dose of her own medicine”: Dolly Parton receives COVID vaccine she helped fund