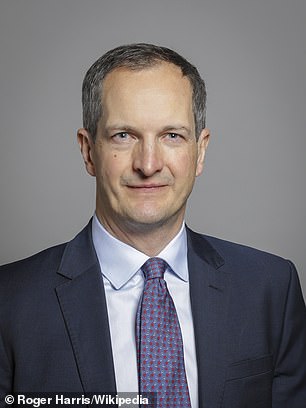 A health minister has today revealed he is ‘extremely hopeful’ sniffer dogs will eventually be used to help detect Covid-19 in the UK.

Scientists have been assessing whether man’s best friend — which can already sniff out and warn of epileptic fits, cancer, and Parkinson’s disease — can be used to identify unique odours emitted by coronavirus patients.

The Health Secretary Matt Hancock is expected to find out the early results of the £500,000 Government funded trial today after visiting experts carrying out the trial today.

If successful, each dog could be used to sniff out up to 250 people an hour to screen crowds at airports and other busy venues. They would be able to sniff out carriers of the coronations who aren’t showing symptoms.

Finland and the United Arab Emirates are already ahead of the UK having deployed coronavirus-sniffing dogs at  main international airports in trials that started late summer. 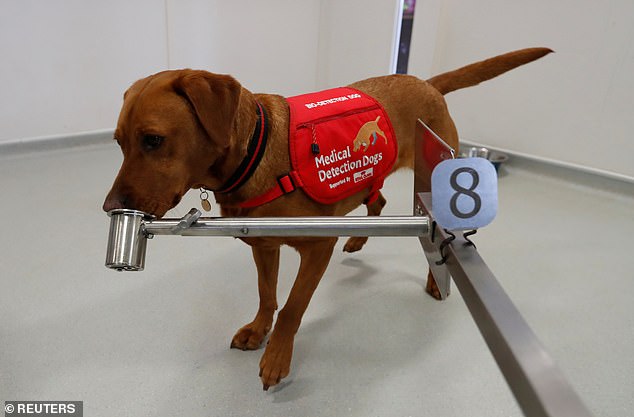 Speaking in the House of Lords today, crossbench peer Baroness Masham of Ilton asked: ‘Could I ask the minister what he thinks about trained sniffer dogs to detect Covid-19?

‘And does he know the London School of Hygiene and Tropical Medicine is one of several groups that have assessed the accuracy of using sniffer dogs?’

Lord Bethell, minister for innovation at the Department of Health and Social Care, replied: ‘I take my hat off to the School of Tropical Medicine who run an extremely exciting trial.

Dogs have an incredible sense of smell which have made them useful in the detection of diseases for decades.

The complex folded structure of their nasal cavity – which results in a huge surface area – is home to over 300million scent receptors compared to 5milllion in a human, according to researchers at London School of Hygiene & Tropical Medicine (LSHTM).

Over the past 10 years, Medical Detection Dogs has published in numerous peer reviewed journals, demonstrating that the dogs’ accuracy in detecting the odour of disease is reliably between 85 and 90 per cent.

And in July, researchers in Germany found trained sniffer dogs can detect the coronavirus in human swab samples with 94 per cent success rate.

LSHTM, in collaboration with the charity Medical Detection Dogs (MDD) and Durham University, have been rigorously testing whether six dogs can detect coronavirus smells through an intensive training programme, which was announced in May.

If successful, the clever dogs could be deployed to places like airports within eight to ten weeks after training, the researchers said, where each dog can ‘screen’ 250 people per hour.

Canine scent detectors have been working at Helsinki-Vantaa Airport since 22 September in a pilot study to see if they can speed up the detection of SARs-CoV-2 in the arrivals lounge.

‘In fact, the Secretary of State (Matt Hancock) is visiting them this very afternoon in order to get an update on that trial.

‘Dogs can be used as a way of screening crowds in places like airports and high-density venues.

‘The validation of that method hasn’t been proven yet, but I am personally extremely hopeful and remain grateful to those involved in the pilot.’

Lord Bethell has previously said the method might provide speedy results as part of a wider testing strategy.

LSHTM, in collaboration with the charity Medical Detection Dogs (MDD) and Durham University, have been rigorously testing whether six dogs can detect coronavirus smells through an intensive training programme.

The team, who began testing the dogs in May, collect odour samples from people who are infected with Covid-19 as well as ones who aren’t, and then train the dogs to tell the difference between them.

If proven to work successfully, the dogs could be deployed within eight to ten weeks after training, the researchers said.

Considering the trial was launched several months ago, the final results of the work are anticipated very soon.

Professor James Logan, head of the department of disease control at the LSHTM, said he was ‘hopeful’ of success back in May.

‘Our previous work has shown that malaria has a distinctive odour, and with MDD, we successfully trained dogs to accurately detect malaria,’ he said.

‘This, combined with the knowledge that respiratory disease can change body odour, makes us hopeful that the dogs can also detect Covid-19.

‘If successful, this approach could revolutionise how we detect the virus, with the potential to screen high numbers of people.’

The dogs, a mixture of Labradors and Cocker Spaniels, can already identify deadly diseases including cancer, malaria and Parkinson’s disease.

Research has revealed the dogs are able to detect the odour of disease at the equivalent dilution of one teaspoon of sugar in an astonishing two Olympic-sized swimming pools of water. 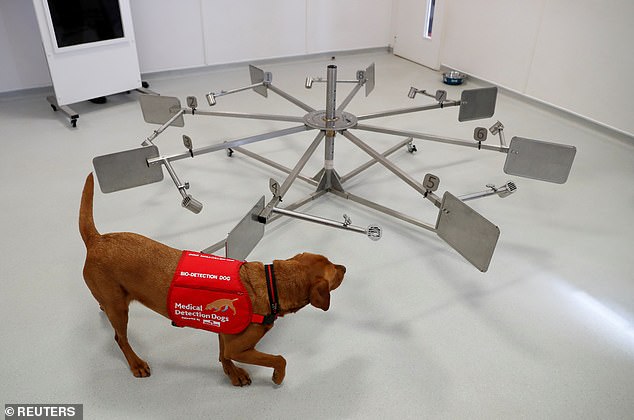 LSHTM, in collaboration with the charity Medical Detection Dogs (MDD) and Durham University, have been rigorously testing whether six dogs can detect coronavirus smells through an intensive training programme

Dogs can pick up the scent in the tiniest shifts in hormones or ‘volatile organic compounds’ that are released by diseased cells in the body.

Human scent consists of a mixture volatile organic compounds that are found in the blood, saliva, urine or breath.

Consequently, dogs have been trained to sniff out the markers of disease that might even go unnoticed with medical tests.

Parkinson’s sufferers smell different even years before they have the disease, therefore dogs could one day be used in detecting it early.

Canine scent detectors have been working at Helsinki-Vantaa Airport, Finland, since 22 September in a pilot study.

According to trainers from Wise Nose, the researchers at the University of Helsinki leading the project, an eight year old greyhound mix learnt to identify the scent of SARs-CoV-2 in just seven minutes, the British Medical Journal reported.

The United Arab Emirates (UAE) is thought to be the first country to put the method into trial after deploying sniffer dogs to airports in August.

Claire Guest, co-founder and chief executive of Medical Detection Dogs, said: ‘We are delighted that the Government has given us the opportunity to demonstrate that dogs can play a role in the fight against Covid-19.

‘They have the potential to help by quickly screening people, which could be vital in the future.

‘We are sure our dogs will be able to find the odour of Covid-19 and we will then move into a second phase to test them in live situations, following which we hope to work with other agencies to train more dogs for deployment.

‘We are incredibly proud that a dog’s nose could once again save many lives.’

Narcos Mexico season 3 Netflix release date: Will there be another series?