Husband of female co-pilot who was flying doomed Nepal plane was ALSO a pilot who died in a plane crash 17 years earlier: Wife paid for flying lessons with insurance payout she received

The husband of the female co-pilot who was flying a passenger plane which crashed into a gorge in Nepal was also a pilot who died in a plane crash 17 years ago.

Anju Khatiwada, 44, who is among the 72 people feared dead after a domestic carrier crashed into a gorge near the city of Pokhara on Sunday, followed in the footsteps of her husband, Dipak Pokhrel, by joining Nepal’s Yeti Airlines in 2010.

Four years earlier, in 2006, tragedy had struck and Pokhrel was killed when a small passenger he was flying for the domestic carrier went down minutes before landing.

Khatiwada was able to pay for her flying lessons with the insurance payout she received following Pokhrel’s death.

And now, 17 years after her husband died, Khatiwada is feared to have been killed after the Yeti Airlines plane she was co-piloting plummeted into a steep gorge, smashed into pieces and burst into flames as it approached Pokhara on Sunday morning. 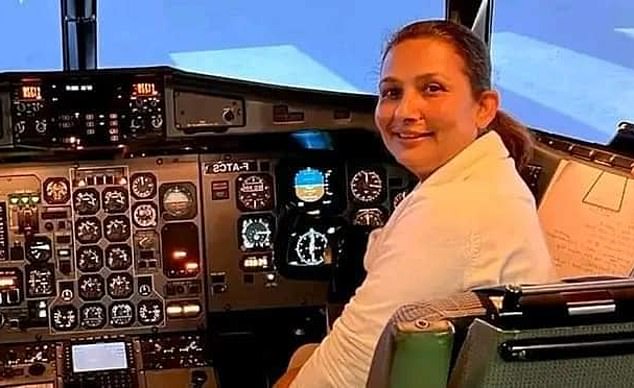 Anju Khatiwada, 44, (pictured) who is among the 72 people feared dead after a domestic carrier crashed into a gorge near the city of Pokhara on Sunday, followed in the footsteps of her husband, Dipak Pokhrel, by joining Nepal’s Yeti Airlines in 2010. 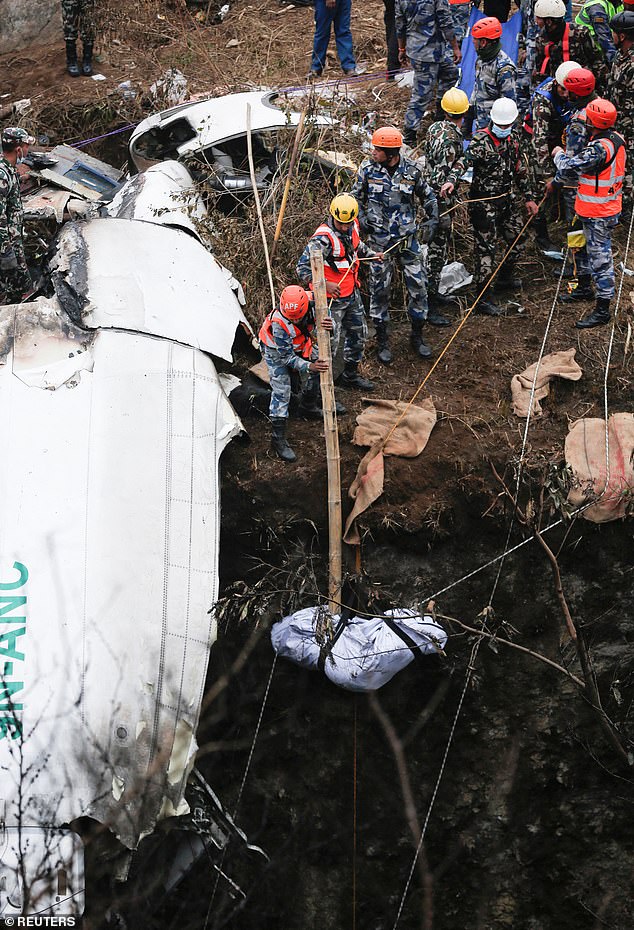 A rescue team recovers the body of a victim from the site of the plane crash of a Yeti Airlines operated aircraft, in Pokhara, Nepal, on Monday

At least 68 people have been killed, but officials fear all 72 people on board the flight have died in Nepal’s worst aviation disaster since 1992.

‘Her husband, Dipak Pokhrel, died in 2006 in a crash of a Twin Otter plane of Yeti Airlines in Jumla,’ airline spokesman Sudarshan Bartaula told Reuters, referring to Khatiwada. ‘She got her pilot training with the money she got from the insurance after her husband’s death.’

A pilot with more than 6,400 hours of flying time, Khatiwada had previously flown the popular tourist route from the capital, Kathmandu, to the country’s second-largest city, Pokhara, Bartaula said.

The body of Kamal K.C., the captain of the flight, who had more than 21,900 hours of flight time, has been recovered and identified.

Kathiwada’s remains have not been identified but she is feared dead, Bartaula said.

‘On Sunday, she was flying the plane with an instructor pilot, which is the standard procedure of the airline,’ said an Yeti Airlines official, who knew Khatiwada personally.

‘She was always ready to take up any duty and had flown to Pokhara earlier,’ said the official, who asked not to be named because he isn’t authorised to speak to media. 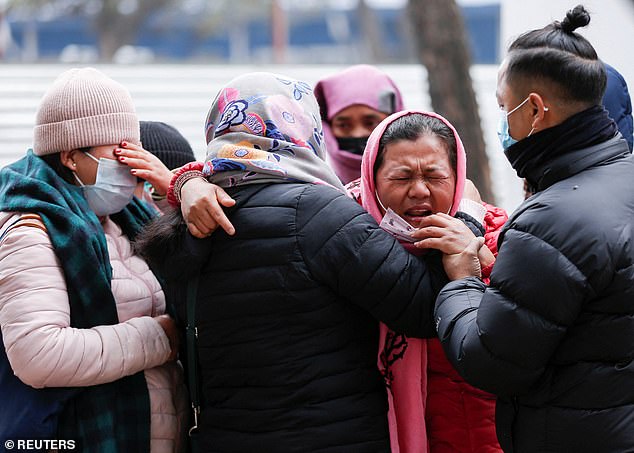 Reuters was unable to immediately reach any of her family members.

The ATR-72 aircraft that Khatiwada was co-piloting rolled from side to side before crashing in a gorge near Pokhara airport and catching fire, according to eyewitness accounts and a video of the crash posted on the social media.

The cockpit voice recorder and flight data recorder from the aircraft, which may help investigators determine what caused it to crash in clear weather, were recovered on Monday.

It remains unclear what caused the crash, the Himalayan country’s deadliest airplane accident in three decades. The weather was mild and not windy on the day of the crash.

A witness who recorded footage of the plane’s descent from his balcony said he saw the plane flying low before it suddenly veered to its left.

‘I saw that and I was shocked… I thought that today everything will be finished here after it crashes, I will also be dead,’ said Diwas Bohora.

After it crashed, red flames erupted and the ground shook violently, like an earthquake, Bohora said. ‘I was scared. Seeing that scene, I was scared.’

Another witness said he saw the aircraft twist violently in the air after it began descending to land, watching from the terrace of his house. Finally, Gaurav Gurung said, the plane fell nose-first towards its left and crashed into the gorge.

Nepal’s Civil Aviation Authority said the aircraft last made contact with the airport from near Seti Gorge at 10.50 am. before crashing.

Nearly 350 people have died since 2000 in plane or helicopter crashes in Nepal – home to eight of the world’s 14 highest mountains, including Everest – where sudden weather changes can make for hazardous conditions.