The Kremlin expressed alarm today that the ‘Doomsday Clock’ had edged closer to midnight than ever, even though the scientists who moved the symbolic dial cited Moscow’s own ‘thinly veiled threats’ to use nuclear weapons.

The ‘Doomsday Clock,’ created by the Bulletin of the Atomic Scientists to illustrate how close humanity has come to the end of the world, on Tuesday moved its ‘time’ in 2023 to 90 seconds to midnight, 10 seconds closer than it has been for the past three years.

Midnight on this clock marks the theoretical point of annihilation. The clock’s hands are moved closer to or further away from midnight based on scientists’ reading of existential threats at a particular time.

‘The situation as a whole is really alarming,’ Kremlin spokesman Dmitry Peskov told reporters, calling for a sober appraisal of the tensions between Russia and the West over the Ukraine crisis. 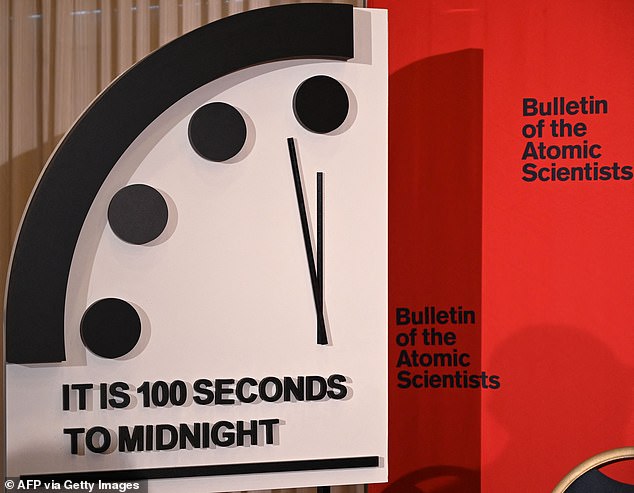 The Bulletin of the Atomic Scientists has its Doomsday Clock set at 90 seconds to midnight, a situation described as ‘alarming’ by the Kremlin 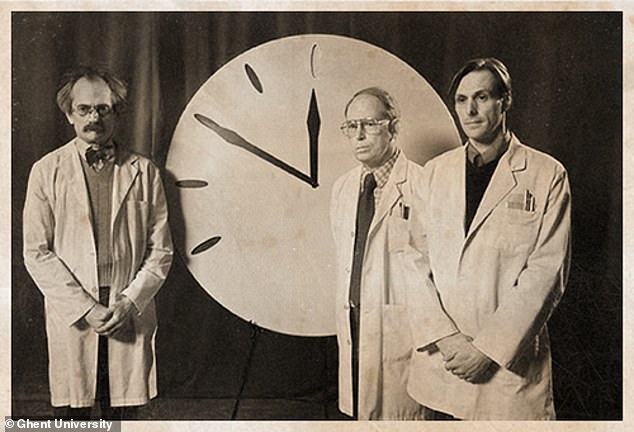 The clock was first unveiled in 1947 (pictured). The clock was originally set to seven minutes to midnight because Langsdorf said, ‘it looked good to my eye’

He said there was no prospect of any detente, based on ‘the line that was chosen by NATO under U.S. leadership’.

‘This imposes on us a duty to be particularly careful, to be alert and to take appropriate measures,’ he added.

On Tuesday, the Bulletin’s president cited repeated warnings by President Vladimir Putin and other Russian politicians that Moscow might be prepared to use nuclear weapons as a key factor in the decision to advance the dial of the ‘Doomsday Clock’.

‘Russia’s thinly veiled threats to use nuclear weapons remind the world that escalation of the conflict by accident, intention or miscalculation is a terrible risk,’ Rachel Bronson told a news conference in Washington.

Every January for the past 75 years, scientists have been keeping track of how likely the annihilation of humankind is.

Tomorrow, the Bulletin of the Atomic Scientists will reveal humanity’s fate once again, deciding whether the Doomsday Clock needs to be moved closer to, or further away from midnight.

The clock is currently set at 100 seconds to midnight, where it has been for the last three years. 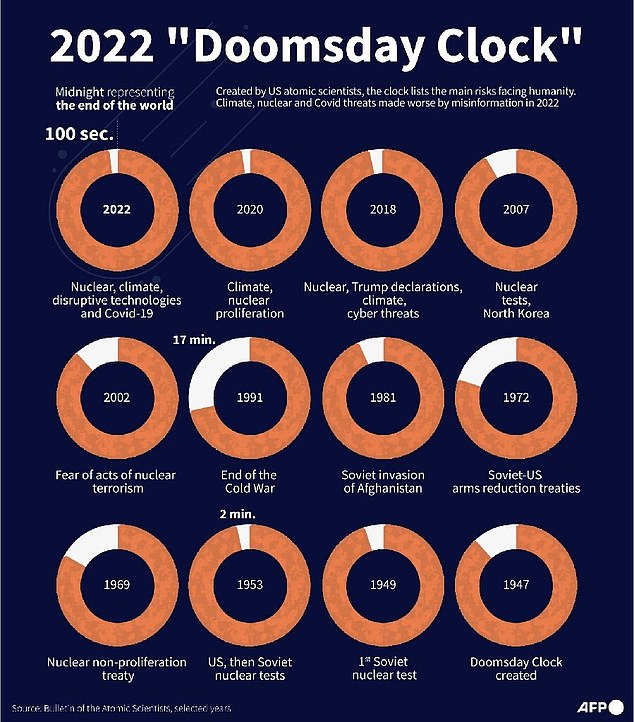 For 2023, the Bulletin said it would take into account the Russia-Ukraine war, bio-threats, proliferation of nuclear weapons, the continued climate crisis, state-sponsored disinformation campaigns and disruptive technologies

But following a year of environmental disasters, Vladmir Putin’s ongoing war in Ukraine and the Covid-19 virus still causing issues, the clock could be set to inch closer to midnight.  .

What is the Doomsday Clock?

The Doomsday Clock was created in 1947 to warn humanity of the dangers of nuclear weapons.

Ever since, it has warned the public about how close we are to destroying our world with technology of our own making.

It serves as a metaphor to remind humankind of issues, such as climate change, Covid-19 and nuclear warfare, that need to be addressed.

Who created the Doomsday Clock?

The Bulletin of Atomic Scientists, which provides academic journals on science and global security issues, created the clock.

Artist Martyl Langsdorf was commissioned by co-editor Hyman Goldsmith to come up with a design for the June 1947 cover, that would ‘frighten men into rationality’, according to Eugene Rabinowitch, the first editor of the Bulletin of Atomic Scientists, who died in 1973.

Only hours in the last quarter before midnight are shown on the clock’s face to reflect the urgency of impending catastrophes.

The Bulletin of the Atomic Scientists said on its website that Langsdorf initially considered using the symbol for uranium instead of the clock to issue a warning.

But after listening to scientists who had worked on creating the bomb, she sensed their need for urgency, so the clock was drawn to reflect that humanity did not have much time left under nuclear weapons. 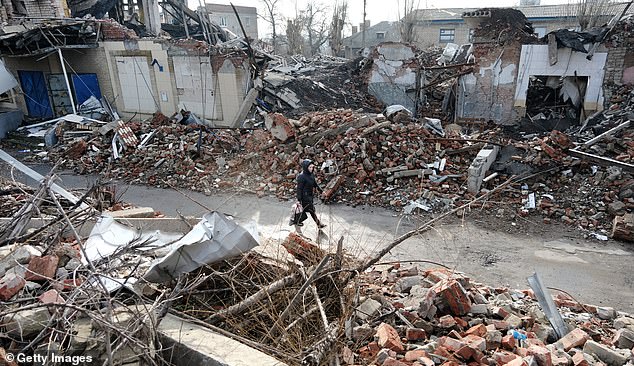 It is unlikely that the Bulletin of the Atomic Scientists would not mention the ongoing war in Russia and Ukraine, which not only had a devastating effect on the countries involved but also had global implications, such as the rise of fuel and energy prices. Pictured: A woman walking down the street by destroyed buildings in Toretsk, Ukraine 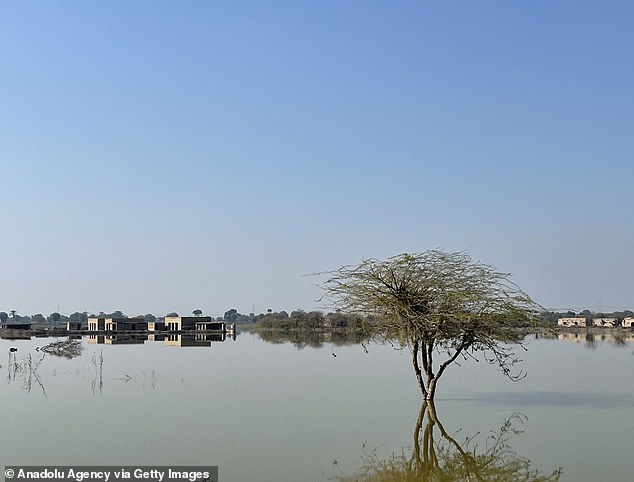 Since it was first mentioned as a threat in 2007, climate change has been a regular factor in whether the Doomsday Clock is moved forward or backward. This year we have seen devastating floods in Pakistan and in 2022, several severe heatwaves hit Europe and China. Pictured: A flooded residential area in Sindh, Pakistan

What time was displayed on the original Doomsday Clock?

The clock was originally set to seven minutes to midnight because Langsdorf said, ‘it looked good to my eye’.

‘For 75 years, the Doomsday Clock has acted as a metaphor for how close humanity is to self-annihilation,’ reads the Bulletin of Atomic Scientists’ website.

‘Since 1947, it has also served as a call-to-action to reverse the hands, which have moved backwards before.’

It then did not move for two years until the Soviet Union successfully tested its first atomic weapon.

At this point, the clock was reset to three minutes to midnight.

Who decides the time?

Shortly after it was first created, Bulletin Editor Eugene Rabinowitch decided whether or not the hand should be moved.

Rabinowitch was a scientist, fluent in Russian, and a leader in the conversations about nuclear disarmament, meaning he was in frequent discussions with scientists and experts all over the world.