Mother, 41, captures horrific moment her son, 16, fractures his spine tombstoning 30ft into a lagoon at a Welsh beauty spot – as she says she hopes the video will deter others from injuring themselves

A mother filmed the moment her son, 16, fractured his spine after tombstoning more than 30 feet into a lake in a Welsh former quarry.

Lindsay Wilson and her son Sam were visiting the beauty spot in Abereiddy, Pembrokeshire last week when her son suffered the dramatic injury.

The 41-year-old NHS worker was filming as her son leaped from the edge of the quarry, hitting the water with a force equivalent to landing on concrete.

Ms Wilson, from Bradford, West Yorkshire, said her son had earlier successfully completed the plunge and decided to make a second attempt which she filmed on her mobile phone. 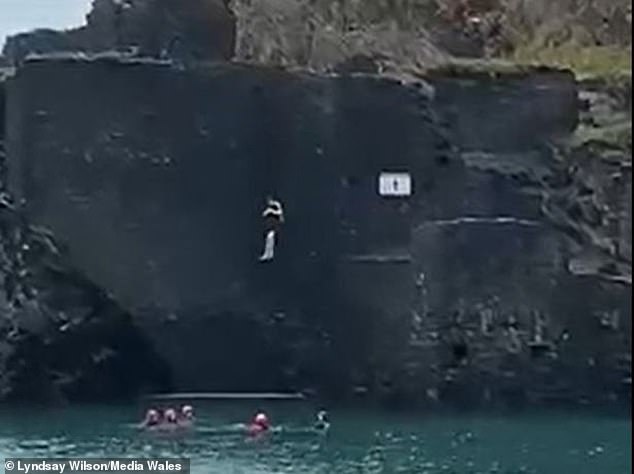 Lindsay Wilson filmed her son Sam, pictured, as he tombstoned into a Welsh lake on August 2 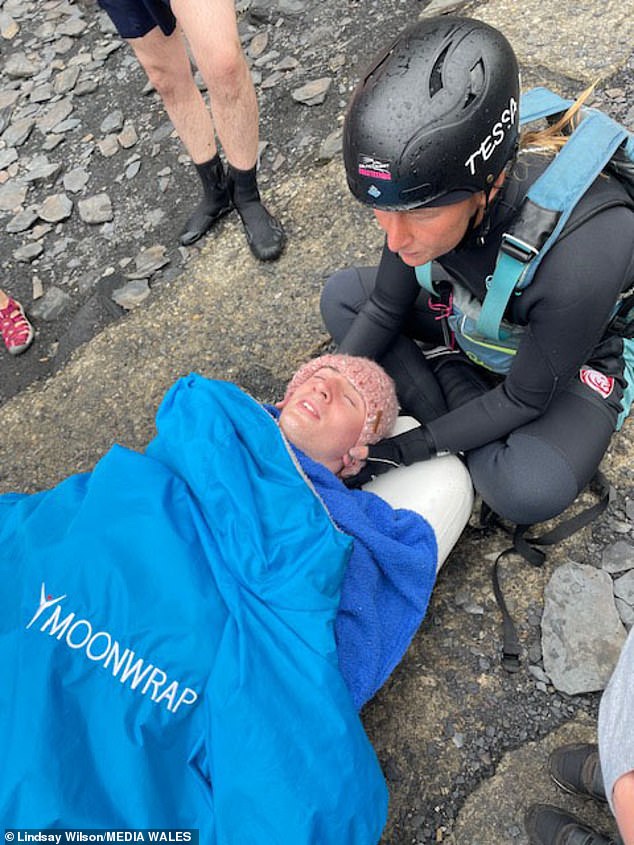 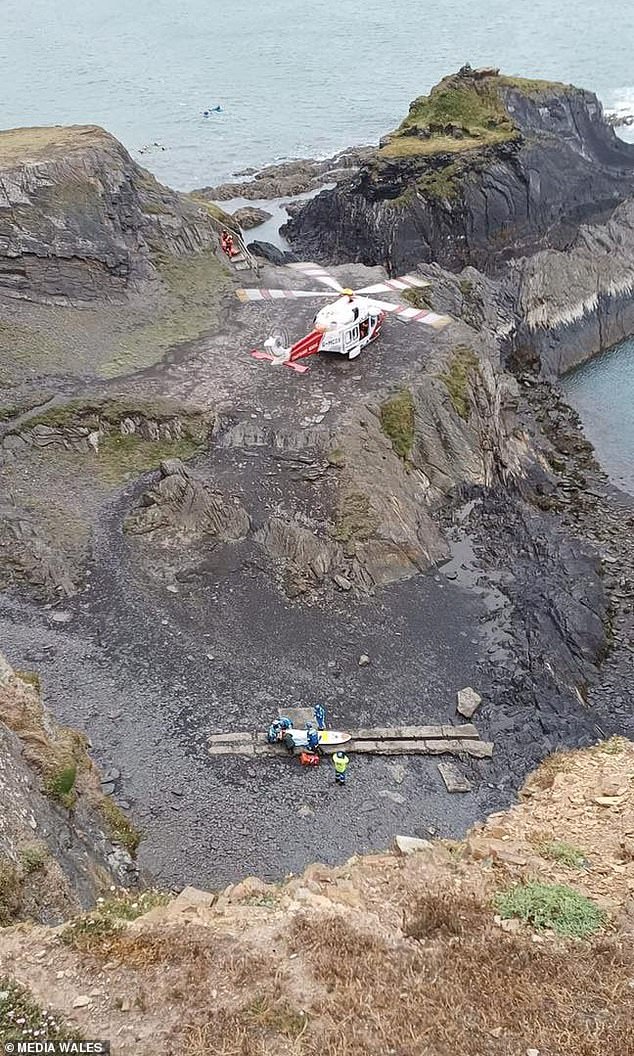 Moments after he entered the water, Ms Wilson realised her son was in trouble after he hit the water in a ‘slightly seated position’ and had ‘turned pale’ when he returned to the surface.

The teenager was able to cling to rocks at the quarry’s edge before several other swimmers came to his assistance.

She told Wales Online: ‘Sam’s a big lad for 16 and a fantastic swimmer so we didn’t think anything was up initially. There were others in the lagoon at the same time and we just thought he was just waiting for them to get out first.

‘But then we could see he’d turned pale and was holding onto the rocks.’

Ms Wilson said a woman from a local outdoors adventure group swam over to her son.

She said the woman, Tessa from Celtic Quest Coasteering was superb in helping her son. 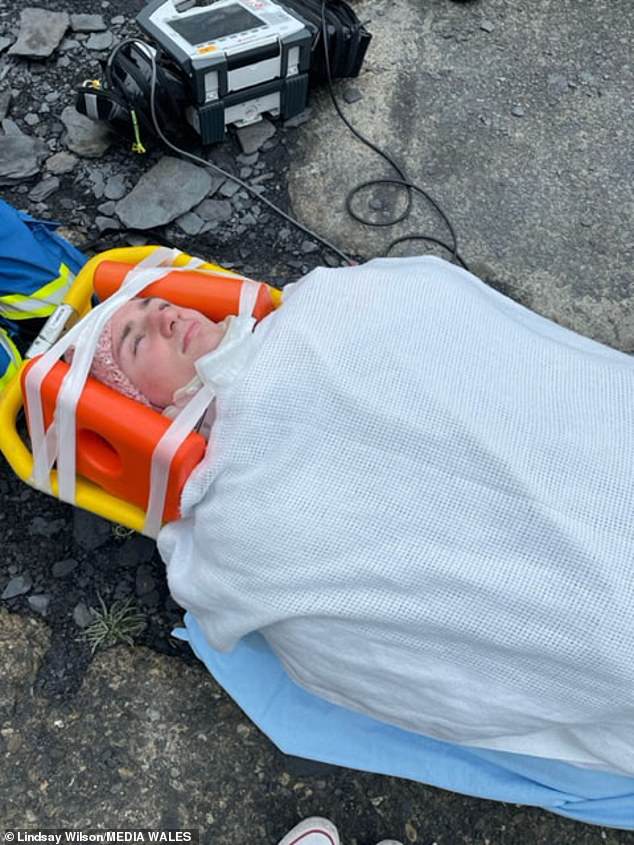 The teenager, pictured, suffered a fractured spine after hitting the water with a force equivalent of landing on solid concrete 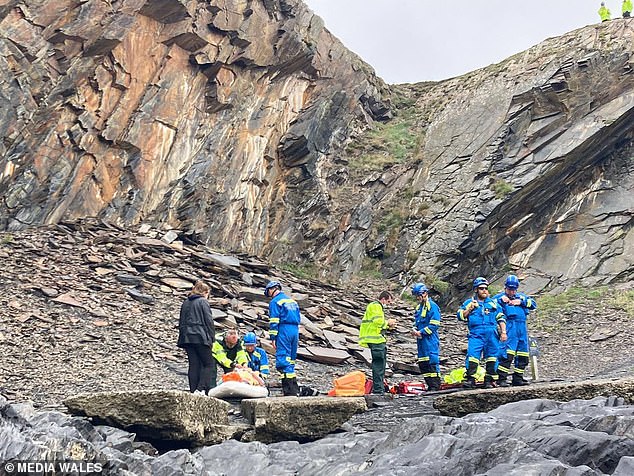 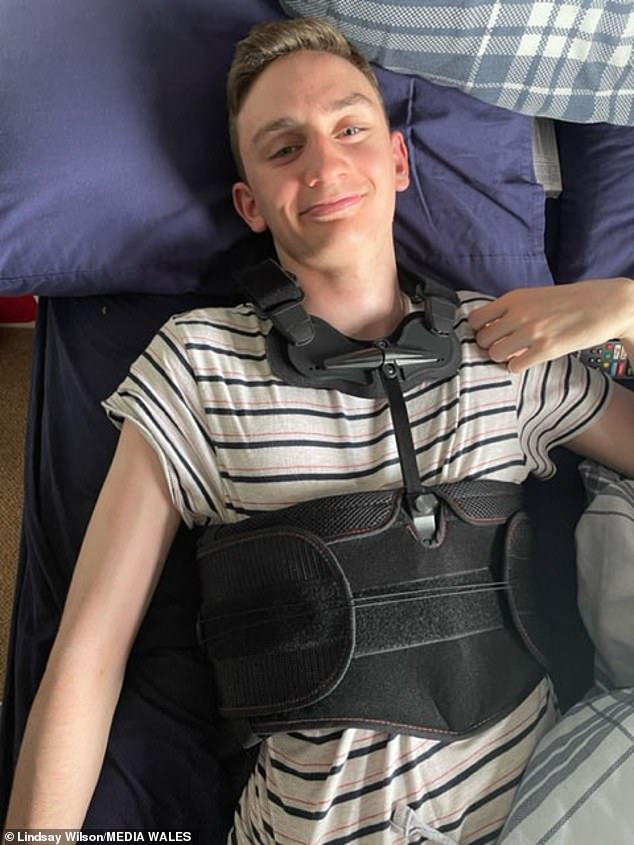 Sam, pictured, has to wear a back brace which the family hopes will allow his spine to heal without a need for surgery

She said: ‘She got him on his back and, using a paddleboard as a makeshift stretcher, a few of them swam him over to the shore. We’re so grateful to them for doing that, I can’t imagine what might have happened otherwise.’

The coastguard helicopter airlifted the teenager to an ambulance which transferred him to hospital in Carmarthen where he underwent a CT scan. Doctors discovered the teenager had suffered a spinal fracture and needed a body brace.

Commenting on her son’s injuries, Ms Wilson said: ‘When he was first checked out he must have still been in shock because he told doctors that he couldn’t feel any pain in his back – so it’s a good job they were so thorough and insisted he have the scan. We’re just hoping that the injury will heal itself over time and he won’t need any surgery.’

Ms Wilson said she and Sam’s father are sleeping on his bedroom floor at night in case he needs anything during the night.’

Ms Wilson said she wanted people to see the video of her son so they wouldn’t take the same risk by tombstoning from a great height.

However, she said despite his injuries, some youngsters at the quarry continued to jump into the water only minutes after the rescue.