Leyla Clelland, a mother-of-three from Birmingham, said she had always been a chubby girl but found herself in a vicious cycle of eating for comfort in her late teens, and she gradually piled on the pounds.

But around six months ago, the 34-year-old reached her heaviest as she toppled the scales at around 35 stone and now fits into a dress size 34.

Her mobility has since plummeted and she’s been forced to have a special toilet fitted to help her wipe herself and spends an entire week cleaning her one bedroom flat, due to becoming so exhausted. 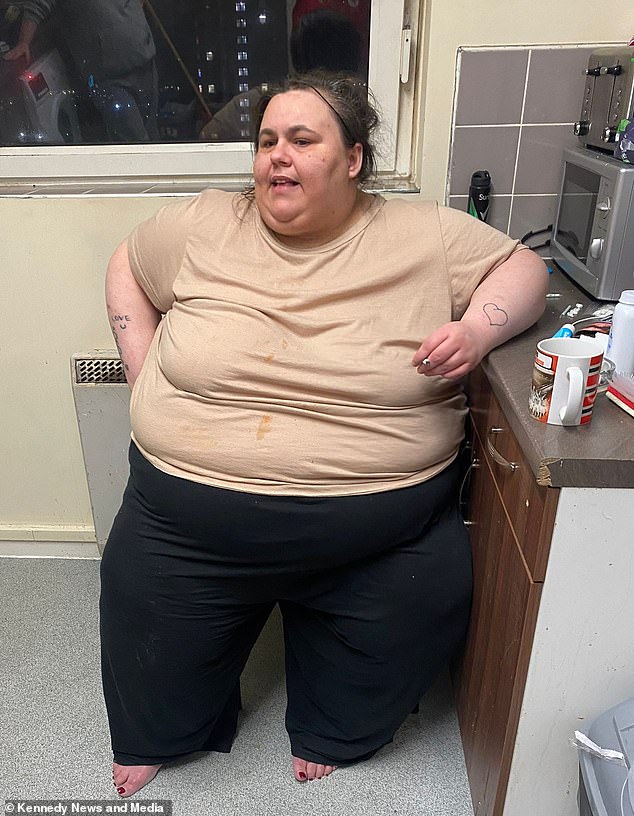 Leyla Clelland (pictured), a mother-of-three from Birmingham, said she had always been a chubby girl but found herself in a vicious cycle of eating for comfort in her late teens, and she gradually piled on the pounds 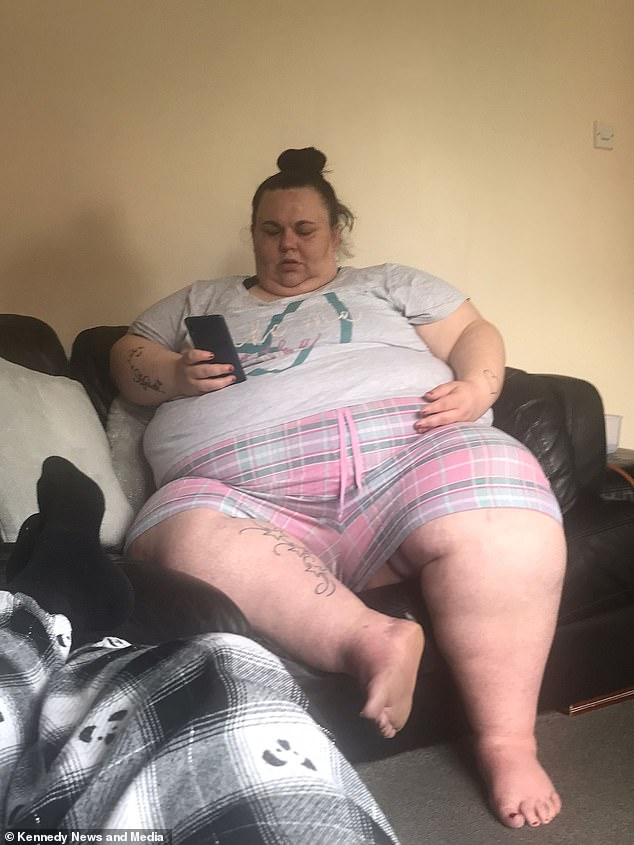 But around six months ago, the 34-year-old reached her heaviest as she toppled the scales at around 35 stone and now fits into a dress size 34

Leyla is even terrified to fall asleep in case she won’t wake up.

The singleton claims her inability to complete basic tasks, including shaving her legs, tying her laces and walking short distances, has seen her sit and cry at home as she no longer ‘feels human’.

The aspiring carer said being called a ‘beached whale’ and ‘fat c***’ in public have destroyed her self esteem to the extent she’s become recluse and mainly only leaves the house at night.

The former fast food restaurant crew member claims she joined the NHS waiting list for weight loss surgery in 2017 and has repeatedly chased it up, to no avail.

Feeling like she’s exhausted all other options, Leyla is now fundraising £10,000 to have the procedure done privately – as she fears that without it, she won’t make it to the age of 40.

Leyla said: ‘I feel that weight loss surgery is my last resort and if I don’t get this help, I may die by 40.

‘I don’t want to die. I want to be here to see my children, see them have children and get married and be happy.

‘I used to be able to do a lot of things and walk to a lot of places. I just want my life back.

‘I have a special toilet in place because I can’t reach to wipe myself because my weight has affected me that much that I can’t reach behind me now. 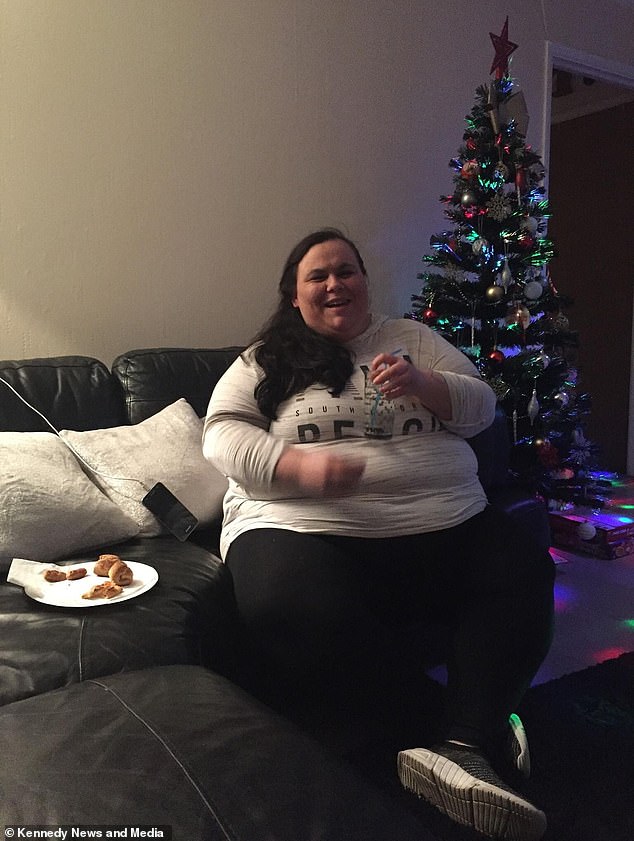 The singleton claims her inability to complete basic tasks, including shaving her legs, tying her laces and walking short distances, has seen her sit and cry at home as she no longer ‘feels human’

‘I go to bed and I’m scared I won’t wake up in the morning, I have nightmares about it. I’m terrified of going to sleep so I stay up all night.

‘I’ve had friends tell me that when I’ve stayed at their house I’ll be asleep and all of a sudden they wouldn’t hear me breathing even for like 60 seconds and then they hear me again. That frightens me and is why I’m so scared of going to sleep.’

The 34-year-old said that she enjoyed her food from a young age and was chubby as a little girl.

Leyla said: ‘I’ve been bullied throughout school. There was only one boy that used to do it but everyone used to laugh along with him. He used to call me ‘fat b*tch’ and put me down all the time.

‘At the age of 19, I started eating more because I was so depressed, I didn’t know what else to do. I was comfort eating.

She could drink 24 cans of coke in a couple of days but in a bid to get healthier, she’s cut it down to around three to four cans a day.

She said her weight snuck up on her over the years, but it wasn’t until she started noticing issues with her mobility around five months ago, that her size really hit home.

Now, she can no longer lie on her back as she feels like she can’t breathe so lays on her stomach. 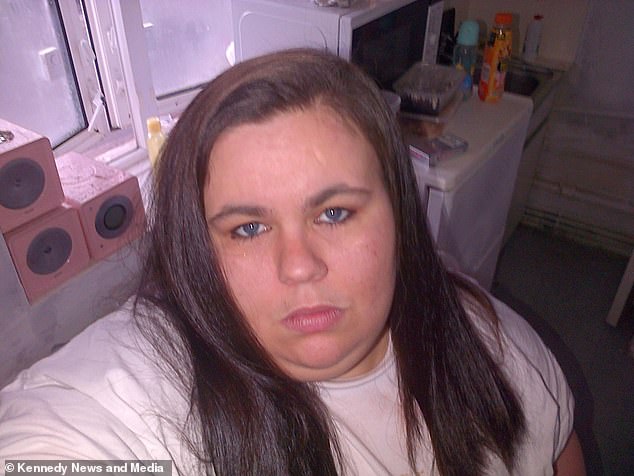 Feeling like she’s exhausted all other options, Leyla is now fundraising £10,000 to have the procedure done privately – as she fears that without it, she won’t make it to the age of 40

Leyla said: ‘I don’t use public transport anymore because sometimes when I’m sitting on a bus and the kids get on, they throw stuff at me and call me names like ‘beached whale’.

‘If I’m walking along the street people shout out ‘fat c*nt’ to me.

‘I don’t go out. The only time I leave my house is at nighttime to go shopping or if I want to go to the Bingo, because I like that sometimes.

‘When people are calling me names I think to myself – you don’t know my story, why are you judging me?

‘When I try to get to know someone [while dating] and they actually see who I am, I’m very judged. People will be like ‘I didn’t know that you were that big’.’

Leyla claims she first approached the NHS asking for help with her weight in 2008 and joined the waiting list for weight loss surgery in 2017 when her size considerably increased.

She said she tried to take diet pills prescribed by her GP but they gave her bad diarrhoea, so was advised to stop taking them.

She claims each time she’s contacted her GP she’s told to try various medications, to wait to speak to various people or to call the hospital.

But since being referred for surgery, the hospital has repeatedly told her to wait and that they’ll be in touch, but she hasn’t received a response.

She’s since ‘given up hope’ and stopped contacting her GP four months ago.

Leyla said: ‘The doctors said that if I don’t lose weight, I could die. I was scared, horrified and ashamed. All I could think of was my little girl.

Leyla said: ‘I feel that weight loss surgery is my last resort and if I don’t get this help, I may die by 40’

Losing weight before surgery will lower the risk of complications and make weight-loss surgery safer.

The main purpose of losing weight before weight-loss surgery is to reduce body fat in the abdominal region, especially in and around the liver.

In some instances, a bariatric surgeon must postpone surgery if the patient’s liver is too large.

Reducing the size of the liver can shorten the operating time for laparoscopic surgery, and this makes the procedure safer.

For super-obese patients (body mass index greater than 50), losing sufficient weight before surgery allows the procedure to be performed using a minimally invasive surgical approach performed through small incisions (laparoscopic), rather than as open surgery.

The amount of weight loss necessary before surgery can only be determined by your bariatric surgeon based on your health, weight, and bariatric procedure.

Some patients are required to lose 10 percent of their weight before weight-loss surgery is performed.

For other patients, losing just 15 to 20 pounds right before surgery is enough to reduce the risk of complications.

‘I’ve tried various diets ever since I got big and going to the gym but because of my anxiety going into one scares me because I feel like everyone’s looking at me and judging, so I don’t want to be in there.

‘I’ve tried swimming but then again with my anxiety, it bothers me.

‘When I walk to the toilet I feel like I’m going to pass out and have to sit down. Sometimes I sit here and cry about it [mobility] because I don’t feel like a human anymore.

‘I rely on people all the time to help me. They have to help put my shoes on as I can’t reach, that’s why I have shoes that I can just slip into.

‘Cleaning tires me out, with a normal person it would probably take two hours to clean a house but with me it takes a week because I get so tired and just want to go to bed.’

Since the new year, Leyla claims she’s been eating healthier and cut back on the amount she eats – including ditching chocolate and crisps, which used to be some of her favourite snacks.

She’s now fundraising to have the surgery done privately, which she’s hoping will set her on a path to a healthier and happier life.

Leyla said: ‘I’m looking forward to having the experience of losing weight, achieving my goal and showing people that I can do it.

‘I just eat breakfast, lunch and dinner now. In between I do have little snacks but don’t eat loads like I did before.

‘I’m looking forward to being able to find someone that I can be with forever, being able to do things for myself and to stop being a burden on people.

‘Having the surgery and funds to have it would mean everything to me.

‘I’d be able to one day get a job and be happy. It would mean that I can have a happy life, can see my children grow up and that my health would drastically improve.’

NHS Birmingham and Solihull ICB (Integrated Care Board) were contacted for comment.

You can donate to Leyla’s GoFundMe page here.

UFO Spotted In Sky Above Memphis, Eyewitness Has Hilarious Reaction

One dead and two rushed to hospital after shooting in Canada