Exiled opposition leader insists he will return as planned, from Paris through Thailand, despite increasing obstacles. 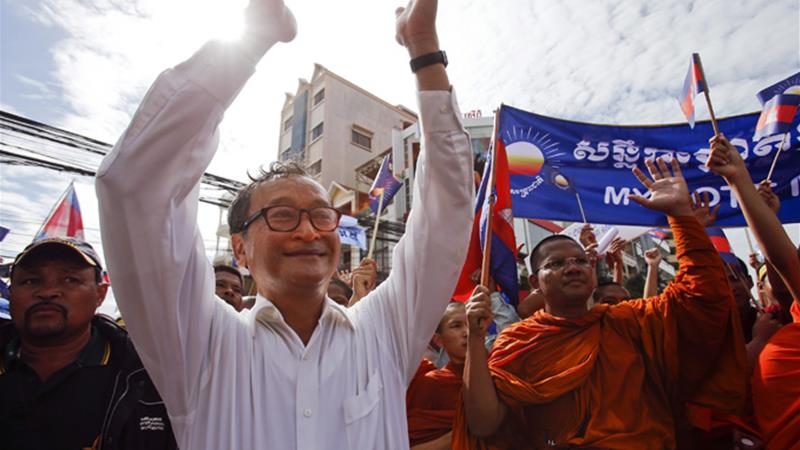 Phnom Penh, Cambodia – Opposition leader Sam Rainsy says he is committed to return to the Southeast Asian nation from self-imposed exile on Saturday, despite government attempts to stop him.

Party officials and human rights organisations estimate more than 40 opposition supporters have been arrested since Rainsy announced in August his plan to return, while Prime Minister Hun Sen has said he will deploy thousands of troops at the border to prevent Rainsy crossing into Cambodia from Thailand.

Rainsy’s deputy Mu Sochua was turned away when she attempted to enter Thailand last month and the country’s Prime Minister Prayut Chan O-cha said this week Rainsy would not be allowed in.

But Rainsy, president of the Cambodia National Rescue Party (CNRP), insists he will board a flight from Paris to Bangkok on November 7, and will make his way to Cambodia on Saturday.

“I have no alternative,” the veteran politician told Al Jazeera from the French capital where he has lived since 2015. “I have tried all the different possibilities: the peaceful, the mature, the real democratic one, but it doesn’t work with Hun Sen … I have to try to create People Power in 2019, because there is no election now.”

The People Power protests in the Philippines in 1986 led to the fall of the country’s dictator Ferdinand Marcos and the restoration of democracy. 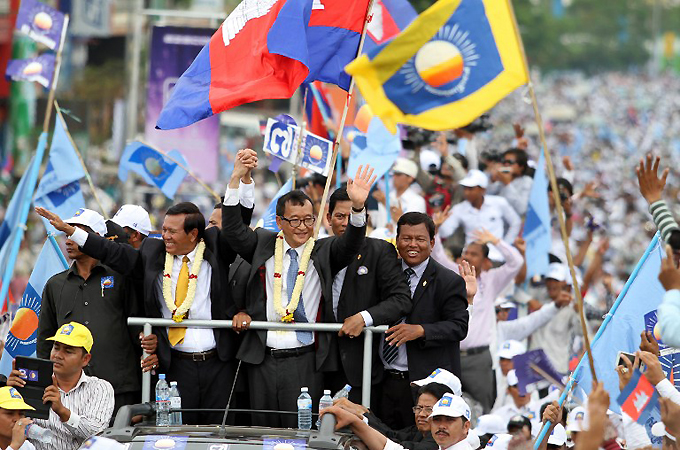 Born into Cambodia’s political elite in 1949, Rainsy studied economics and accounting in France before taking a job in the financial sector.

He remained in Europe until 1992, when he returned to Cambodia following the fall of the Khmer Rouge, and won a seat in parliament for the royalist Funcinpec Party in UN-backed elections.

Rainsy remembers the first speech he gave after his return to Cambodia. “I was a little bit clumsy because I was just coming from France, which was a totally different world,” he said. “So I had to adapt, and to speak using the language of the local people.”

While Funcinpec was the winner of the 1993 poll, Hun Sen’s Cambodian People’s Party refused to accept the results.

In an uneasy compromise, a joint government was formed with Funcinpec leader Norodom Ranariddh as first prime minister and Hun Sen as second prime minister.

Factory workers and the young rallied around Rainsy who developed a reputation for battling corruption, but it was not long before differences began to emerge in the government, setting in train a three-decade struggle for control of Cambodia between Hun Sen and his opponents.

In 1997, Rainsy narrowly escaped death during a grenade attack on a political rally that left at least 16 people dead. In an atmosphere of increasing suspicion and recrimination, Hun Sen was able to seize power for himself in a coup later that year.

Rainsy, who established his own party in the mid-90s, has left the country multiple times since 2005 to avoid charges against him, and last returned in 2013 when tens of thousands took to the streets of Phnom Penh to welcome him home.

The opposition performed strongly in elections held that year, but the government began to crack down soon afterwards and Rainsy went into exile again in 2015 after being found guilty of criminal defamation. The opposition was outlawed altogether before 2018 elections and its leader Kem Sokha detained and accused of treason.

Now, Rainsy says, it is time for him to return and ensure Hun Sen’s removal from office.

“Only Hun Sen and I remain,” he said. 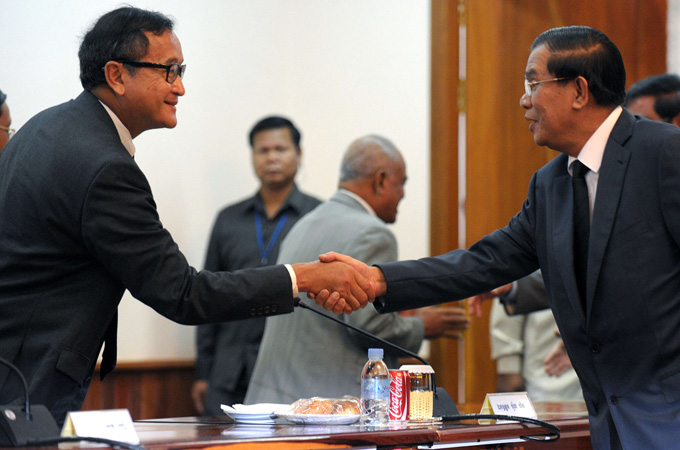 While the government appears to have taken Rainsy’s promise seriously, not everyone believes he will actually return.

Kem Sokha’s daughter, Kem Monovithya, who is also a party official, is one of them.

She told local media late last month she thought Rainsy’s return was a “PR stunt”. She declined to discuss his possible return with Al Jazeera.

Since February, the European Union has been reviewing its Everything But Arms (EBA) agreement with Cambodia amid increasing concern about its commitment to human rights.

Virak said Rainsy’s return could be part of a strategy to ensure the trade agreement, which allows Cambodia to export its products tariff-free, is revoked.

Earlier this year, Rainsy said he would return to Cambodia in March, but cancelled the plan after the EU formally initiated the EBA withdrawal process.

According to Virak, the timing this month is similar: the EU is due to send a report on the EBA a few days after the day Rainsy has said he will return.

If Rainsy is prevented from returning the agreement could be suspended, Virak said, potentially destabilising the economy.

But Sochua, who first came to know of Rainsy when she was a teenager, rejects the suggestion. She says the party cannot stand by and do nothing given the situation in Cambodia.

“He’s principled,” she said of Rainsy. “Today, I still remember the words: He said, ‘Sochua, justice will prevail.'”

Hun Sen has accused the EU of trying to interfere in Cambodia’s internal affairs since it announced the possible withdrawal of the EBA, and has moved ever closer to China, which has deepened its relationship with Cambodia over the past 10 years.

Rainsy has criticised that growing influence as a new form of colonialism.

“They are sending settlers, hundreds of thousands of settlers who come to live on a permanent basis, who expel Cambodians from their homes,” he said.

Rainsy’s political strategy is not the only controversy surrounding the veteran politician.

He has been criticised in the past for his comments on Vietnamese – including the use of derogatory words – or what some say is his comfortable lifestyle in Paris, and for being perceived as more French than Cambodian.

But he insists he has given up much, both financially and personally, in his fight for democracy in Cambodia.

Even when his mother was dying and asked for him, he did not go – a lasting source of regret.

“I didn’t come fast enough,” he said. “I was campaigning in Kampong Cham.”

Property he and his wife had been able to buy on the back of his success in banking also had to be sold, he said.

Despite the criticism, Sochua remains unwavering in her support for Rainsy.

When he last returned in 2013 she showed him where to bend down and kiss the soil, she said.

“It was a very, very emotional moment between the two of us. We locked eye to eye: Within seconds it was like ‘now, this is the moment.'”

By the weekend, Rainsy hopes once again to be back in Cambodia and challenging Hun Sen’s long grip on power.

He insists he will not back down.

“People have been telling me that I am very stubborn,” Rainsy told Al Jazeera. “They say this pejoratively. But for me, it is determination and perseverance.” 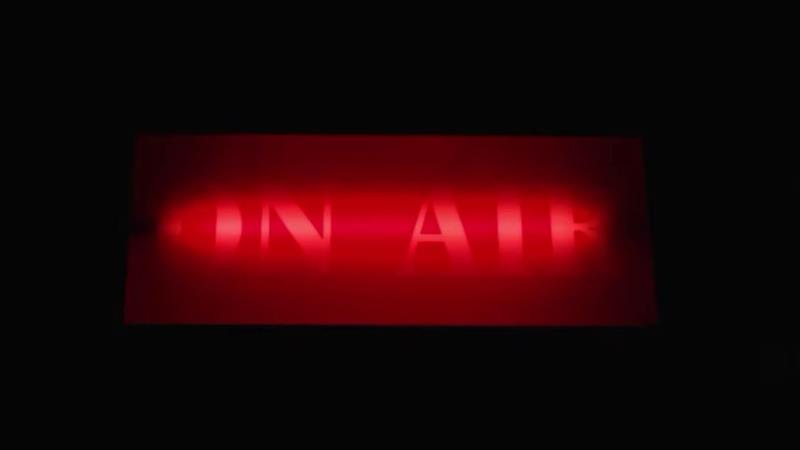