Olivia Wilde is on rumor patrol — and there’s no shortage of ’em.

The Don’t Worry Darling director-actress addresses with Vanity Fair what she calls “baseless rumors” and “internet bullying” surrounding around the film and its tension-filled premiere at the Venice Film Festival on Monday. She also slams the “complete horses*** idea” that she left Jason Sudeikis for Harry Styles — and doubled down on her claim she fired Shia LaBeouf.

“No amount of internet bullying can cause me to question my belief in a movie made collectively by so many brilliant people,” Wilde told the outlet days after the film’s lead, Florence Pugh, seemingly ignored her on the red carpet and cast member Chris Pine had to publicly deny that Styles spat on him. (Styles made light of loogie-gate on stage Wednesday night.) “We worked too hard, and went through too much together, to be derailed by something that really has nothing to do with filmmaking.”

On the topic of Pugh specifically, she said, “Florence’s performance in this film is astounding. It’s just baffling to me that the media would rather focus on baseless rumors and gossip, thereby overshadowing her profound talent. She deserves more than that. As does the movie, and everyone who worked so hard on it.”

As for Pugh’s lack of promotion of the film — sitting out the press conference and reportedly not attending the upcoming New York premiere — Wilde said, “Florence is one of the most in-demand actresses in the universe. She’s on set on Dune. I gather that some people expect for her to be engaging more on social media. I didn’t hire her to post. I hired her to act. She fulfilled every single expectation I had of her. That’s all that matters to me.” 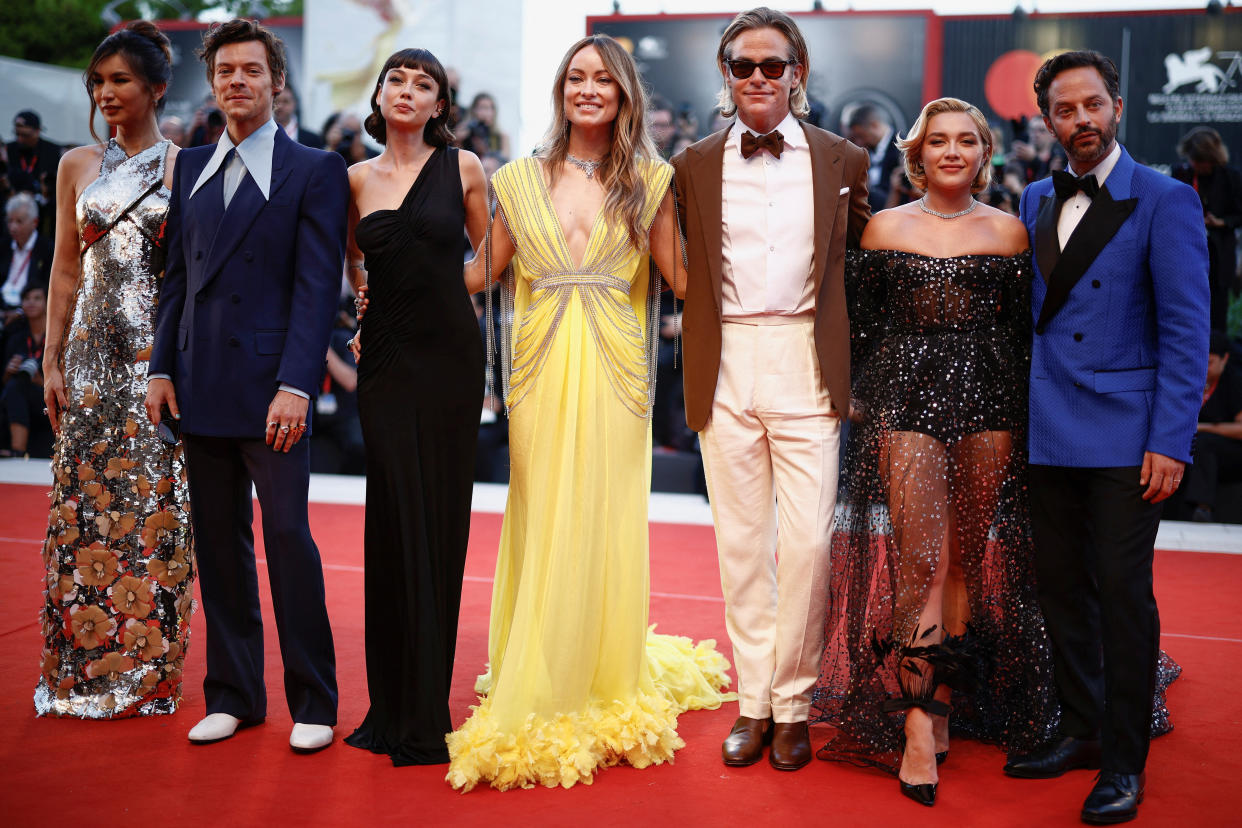 Wilde also discussed LaBeouf. He was originally hired to play Jack, the role that later went to Styles. Wilde claimed she fired him, citing his combative energy on the set, and LaBeouf, who has since faced abuse allegations, denied that. He insisted he quit due to Pugh’s lack of availability to rehearse, and surfaced texts and a video he said Wilde sent him backing up his claim. (In the video, Wilde talked about “Miss Flo” needing a wake-up call — which certainly wouldn’t have thrilled Pugh when it was released.)

Her telling was that Pugh, whose character Alice is married to Jack, was uncomfortable with LaBeouf’s behavior in preproduction in 2020. As a result, Wilde — protecting Pugh — called LaBeouf personally and fired him. She said, “This issue is so much more nuanced than can be explained in private texts released out of context. All I’ll say is he was replaced, and there was no going forward with him. I wish him the best in his recovery.”

Styles replaced LaBeouf — and at some point a relationship sparked with Wilde, who had split with the Ted Lasso star. Wilde slammed rumors that her relationship distracted her from directing — and that sparked tension with Pugh as well.

“The idea that I had five seconds in the day to be distracted by anything is laughable,” Wilde said. “I was there before everyone. I was there after everyone. And it was a dream. It’s not like this work was not enjoyable. It was just all-encompassing.”

Wilde also addressed rumors that her relationship the pop star began before she called off her engagement to Sudeikis, with whom she shares two children.

“The complete horses*** idea that I left Jason for Harry is completely inaccurate,” said Wilde. “Our relationship was over long before I met Harry. Like any relationship that ends, it doesn’t end overnight. Unfortunately, Jason and I had a very bumpy road, and we officially dissolved the relationship towards the beginning of the pandemic. We were raising two kids during lockdown, so we co-parented through that time. Once it became clear that cohabitating was no longer beneficial for the children, it became the responsible thing to not, because we could be better parents as friends who live in different houses.” 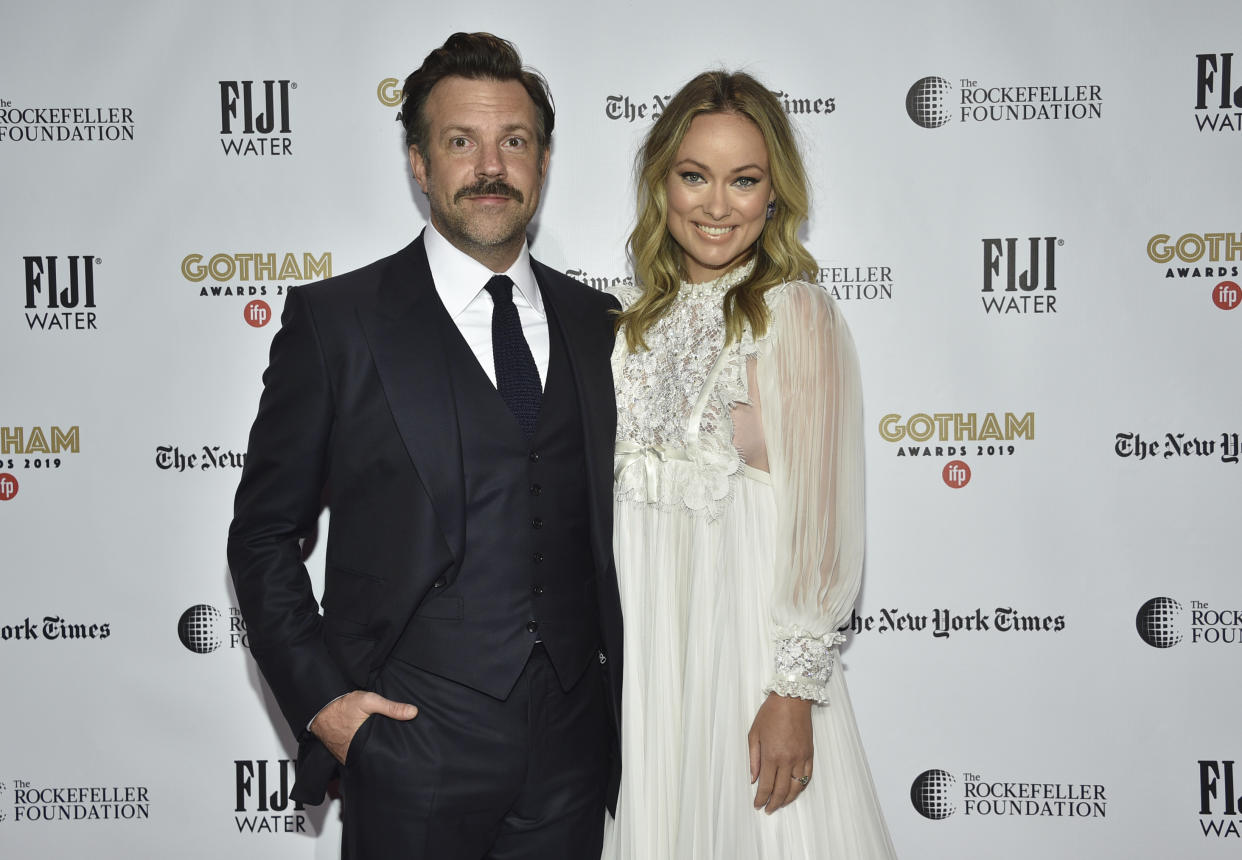 She went on to call out Sudeikis for saying they split in November 2020 when they parted ways early into lockdown.

“I don’t understand the need to create false narratives and drama around this kind of stuff,” she said. “It’s like, haven’t the kids been through enough?” She added that she has been “up front” with kids Otis, 8, and Daisy, 5, about the situation, saying, “They understand the concept of making decisions to protect yourself and to live an authentic, happy life. They really do. I evolved a lot between when I was 27 and 35. I found myself as a director. And I think I found myself as an individual. And sometimes when you evolve, you evolve out of relationships that were based on an earlier version of yourself.”

Wilde again spoke about Sudeikis serving her legal papers on stage at CinemaCon earlier this year amid their custody battle. While he denied knowing when she would be served, Wilde said she felt it was planned to “disrupt” her big moment.

“So many people were shocked on my behalf. Unfortunately, I wasn’t that shocked. There’s a reason that I didn’t stay in that relationship. Unfortunately, that was consistent with my experience of the relationship. So I was probably the least shocked. But I was also deeply saddened by it — and disturbed by it in lots of ways… I know it took an extraordinary amount of energy [for the server] to get in that room. It took a tremendous amount of forethought. And I will tell you, there are so many other ways to do that. I am not someone who lives in hiding. If that experience hadn’t been public, I never would have spoken of it, because I never would want my kids to know that happened. Unfortunately, they will know that happened.” 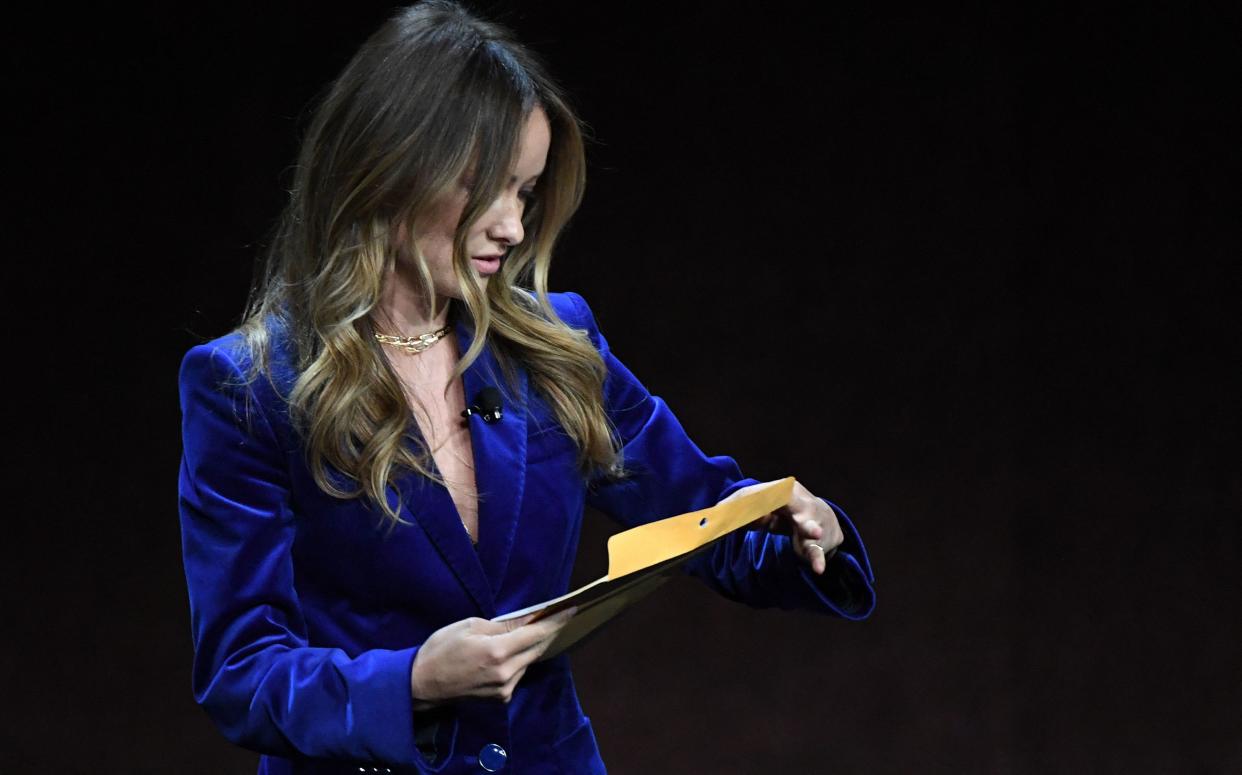 She said her split from Sudeikis has led to constant criticism from the public over how she’s living her life now that they split custody and she has the children every other week.

“I’ve had women judging me for separating from Jason,” she said. “There are people who feel entitled to hurl horrendous insults at me and my family. Telling me I’m a terrible mother. Threatening me and my kids or saying I should lose my children. … When they are with their father, I trust him to be a great parent. So when they’re not with me, I continue to live my life. But the judgment I’ve seen from people for living my life…”

Wilde did speak a little about her romance Styles. After explaining her hesitation (“Once you crack open the window, you can’t then be mad when mosquitoes come in”), she talked about going to his shows amid his Love on Tour. She marveled at looking how happy he makes the mostly female audiences. She talked about his “beautiful and loving group” of fans. She did said she would get married again — using her parents as an example of the right kind of partnership.

“It’s incredibly supportive and they’ve evolved, individually and as a couple, through so many unexpected twists and turns,” she said. “They’re best friends. And I think that’s what marriage really is. It’s a commitment to a best friendship. And a partnership. I think now I really understand what that means.”

Mom portrayed by Nicole Kidman in film: She ‘got it right’