‘A promise made and kept for life – that was your gift’: Poet Laureate Simon Armitage reads his emotional tribute to Her Majesty in heart-breaking video tweeted from Royal Family account

The Poet Laureate Simon Armitage has read his emotional tribute to the late Queen Elizabeth II thanking her for decades of loyal service.

The ‘poem of condolence’, named Floral Tribute, refers to the monarch carrying the country in ‘slender hands… hands that can rest, now, relieved of a century’s weight’.

This afternoon, the Royal Family shared a heart-breaking video of the poet solemnly reading the 18-line tribute, with photos of the thousands of flowers, Paddington Bears and marmalade sandwiches that have been placed across the country by mourners.

The poem, written as a ‘token of thanks to the queen’ takes the form of a double acrostic, meaning the first letter of each line in both stanzas spells the name Elizabeth. 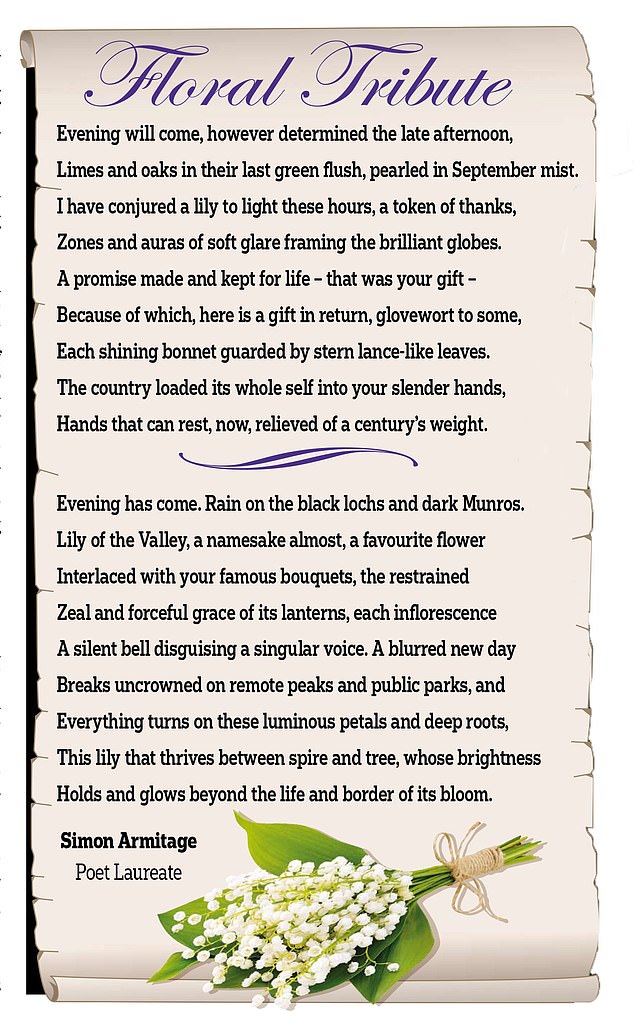 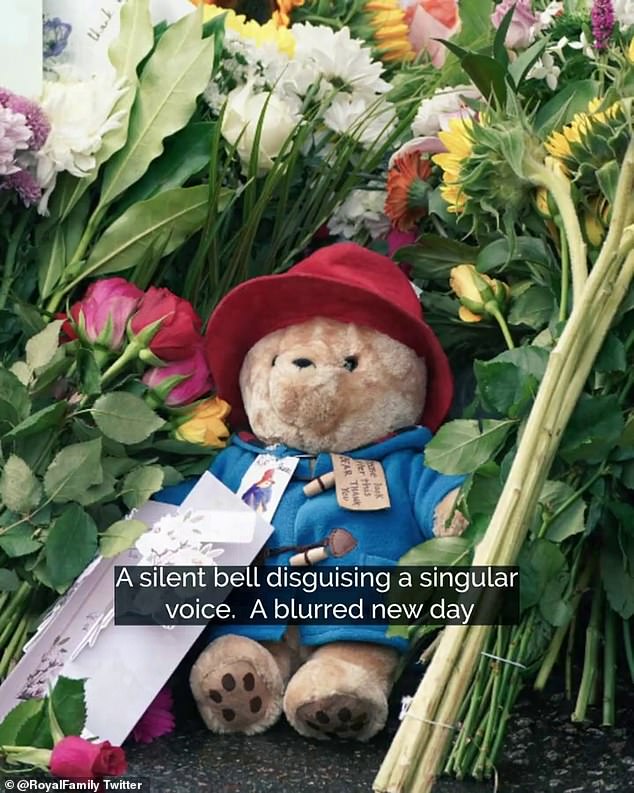 As the poet solemnly read out the heart-breaking tribute, a reel of photos ran in the background of the video, including photos of Paddington Bears and flowers left my mourners all over the country

It starts by describing the coming of a September evening – a reference to the month of the Queen’s death – and says the ‘determined’ late afternoon cannot delay nightfall.

The poet then describes a lily illuminating the darkness and says it is a ‘token of thanks’.

Speaking on BBC Radio 4’s Today programme, Mr Armitage said he had tried to be ‘personal and write a poem of condolence but without being intrusive’.

He also explained why he decided to use the acrostic technique to spell out the late Queen’s name. 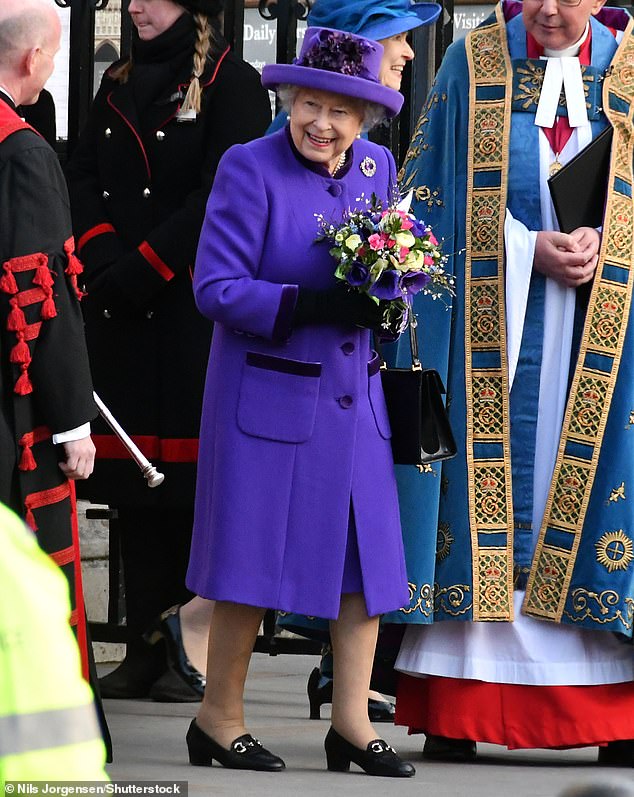 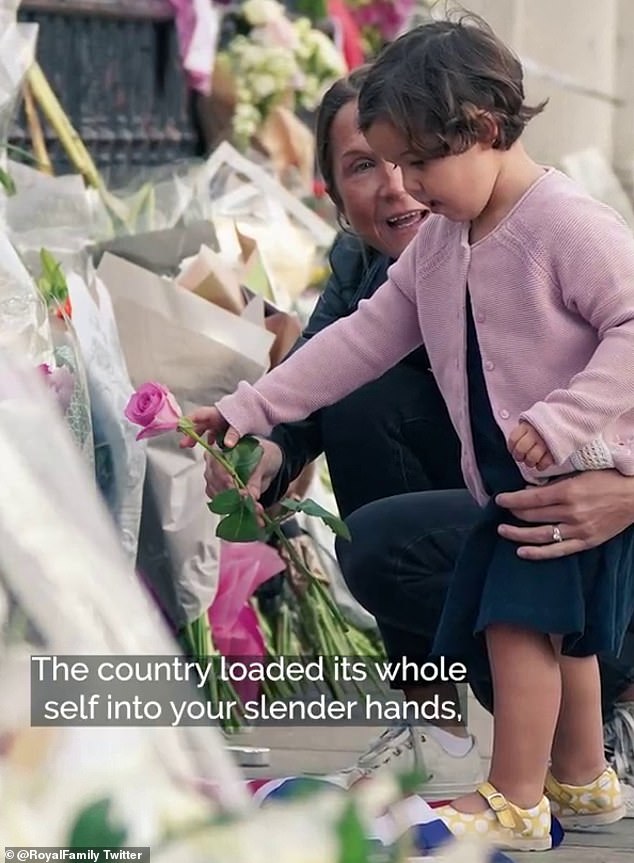 The video was shared by the Royal Family on its Twitter page. The heart-breaking tribute included a photo of a child laying down a rose, paying respect to the late monarch 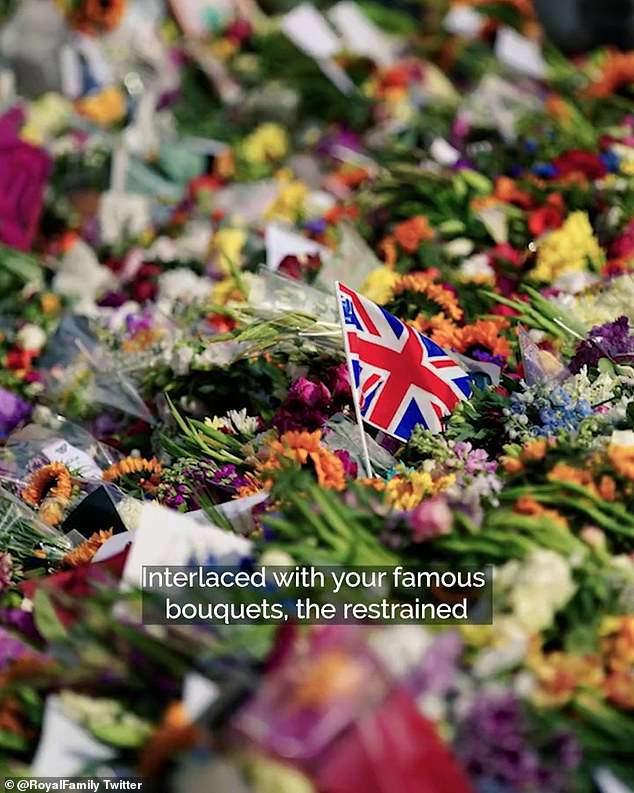 He added: ‘It’s a lovely name but a name she probably rarely got to hear very much because everybody had to preface that with ceremonial nominals.’

Lily of the valley was the Queen’s favourite flower and was included in her coronation bouquet in 1953. Her childhood nickname was Lilibet and the poem also refers to lily of the valley as ‘a namesake almost’.

The Queen chose it when the Royal Family shared their favourite blooms in 2020 after the pandemic forced the Chelsea Flower Show online.

Buckingham Palace said it had ‘special associations’ for the monarch since her coronation, and the sweet-scented flower also featured in Kate Middleton’s wedding bouquet.

Often used to symbolise trustworthiness, the woodland plant is grown in the grounds at Buckingham Palace.

Mr Armitage refers to the Queen’s coronation and her decades of service in the poem, writing: ‘A promise made and kept for life – that was your gift.’

He continues: ‘The country loaded its whole self into your slender hands,/ Hands that can rest, now, relieved of a century’s weight.’

The second stanza begins with a reference to the Queen’s death in Scotland: ‘Evening has come. Rain on the black lochs and dark Munros.’

It pays tribute to her ‘restrained zeal and forceful grace’ and compares her to the lily of the valley, saying: ‘Everything turns on these luminous petals and deep roots.’

It ends by suggesting the Queen’s influence will last beyond her lifetime, as the lily’s brightness ‘holds and glows beyond the life and border of its bloom’. Mr Armitage, 59, has served as poet laureate since May 2019 and met the Queen once a year when she held audiences for the winner of her annual gold medal for poetry.

Earlier this year he wrote a 70-line poem, Queenhood, to mark her 70 years of service at the Platinum Jubilee. The poet, a former probation officer, also wrote an elegy for the death of the Duke of Edinburgh, The Patriarchs.

In an interview with The Times earlier this year, he said he had been ‘won over by the Queen’ and believed the nation needed the monarchy.

Will the UK go to war?