Polls in Italy CLOSE: Country braces for political earthquake in election which is set to usher in the most right-wing government since the Second World War

Polls in Italy have closed as Italians voted on Sunday on whether to usher in the country’s first government led by the far-right since World War II, bringing eurosceptic populists to the heart of Europe.

The Brothers of Italy party, headed by one-time Mussolini supporter Giorgia Meloni, has led opinion polls and looks set to take office in a coalition with the far-right League and Silvio Berlusconi’s Forza Italia parties.

Meloni, 45, who campaigned on a motto of ‘God, country and family’, hopes to become Italy’s first female prime minister.

‘Today you can participate in writing history,’ she tweeted.

Turnout was over 19 per cent by 10am, according to the interior ministry, in line with the last elections in 2018, as large queues formed outside voting stations.

‘I’m playing to win, not just to take part,’ Matteo Salvini, head of the far-right League, told reporters as he went to cast his ballot.

‘I can’t wait to come back from tomorrow as part of the government of this extraordinary country,’ he added. 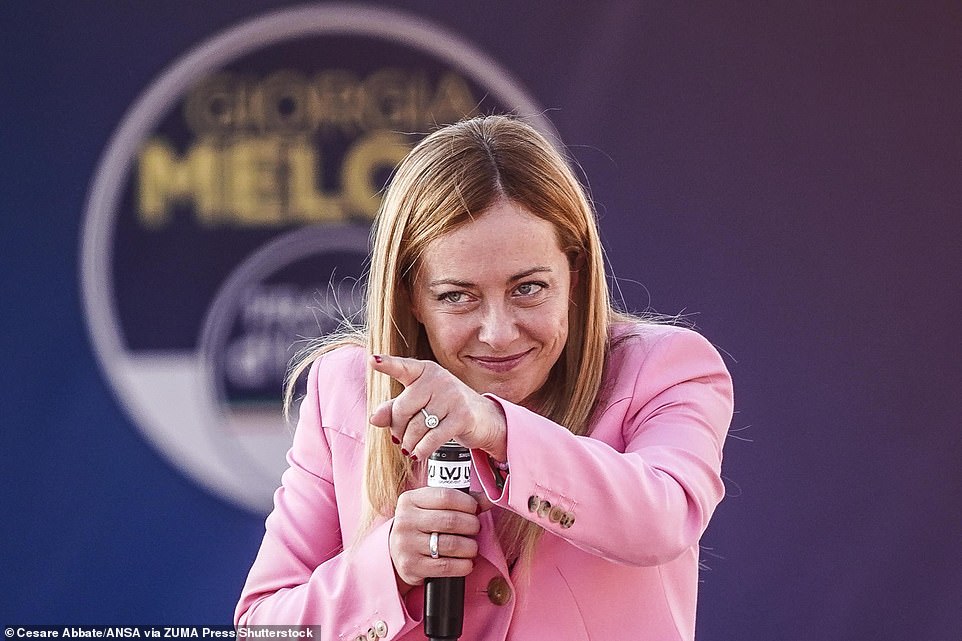 Leader of Italian party the Brothers of Italy Giorgia Meloni attends the center-right closing rally of the campaign for the general elections, Naples 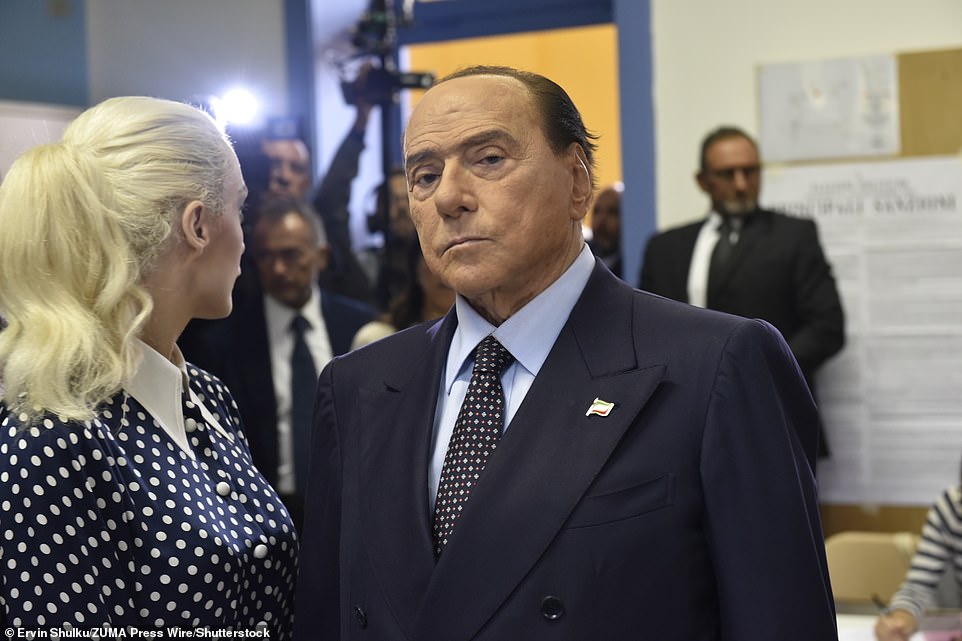 Many voters are expected to pick Meloni, ‘the novelty, the only leader the Italians have not yet tried’, Wolfango Piccoli of the Teneo consultancy said.

Brussels and the markets are watching closely, amid concern that Italy – a founding member of the European Union – may be the latest country to veer hard right, less than two weeks after the far-right outperformed in elections in Sweden.

If she wins, Meloni will face challenges from rampant inflation to an energy crisis as winter approaches, linked to the conflict in Ukraine.

The Italian economy, the third largest in the eurozone, rebounded after the pandemic but is saddled with a debt worth 150 percent of gross domestic product.

Meloni has dedicated her campaign to trying to prove she is ready despite her party never before being in power.

Brothers of Italy, which has roots in the post-fascist movement founded by supporters of dictator Benito Mussolini, pocketed just four percent of the vote in 2018.

Meloni has moderated her views over the years, notably abandoning her calls for Italy to leave the EU’s single currency.

However, she insists her country must stand up for its national interests, backing Hungary in its rule of law battles with Brussels.

Her coalition wants to renegotiate the EU’s post-pandemic recovery fund, arguing that the almost 200 billion euros Italy is set to receive should take into account the energy crisis aggravated by the Ukraine war.

But ‘Italy cannot afford to be deprived of these sums’, political sociologist Marc Lazar told said, which means Meloni actually has ‘very limited room for manoeuvre’. 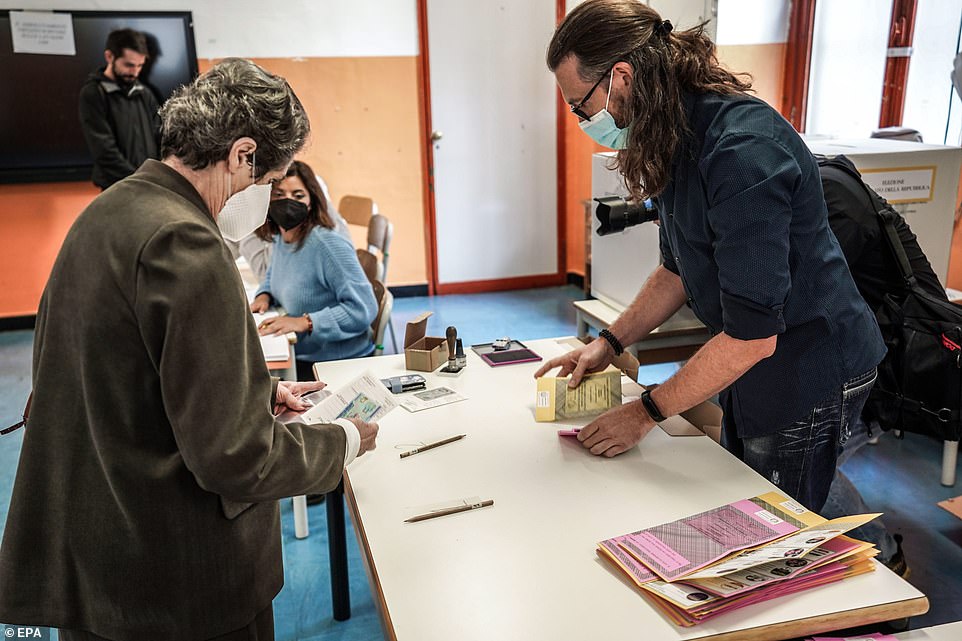 People during voting for the general election at a polling station in Turin, northern Italy 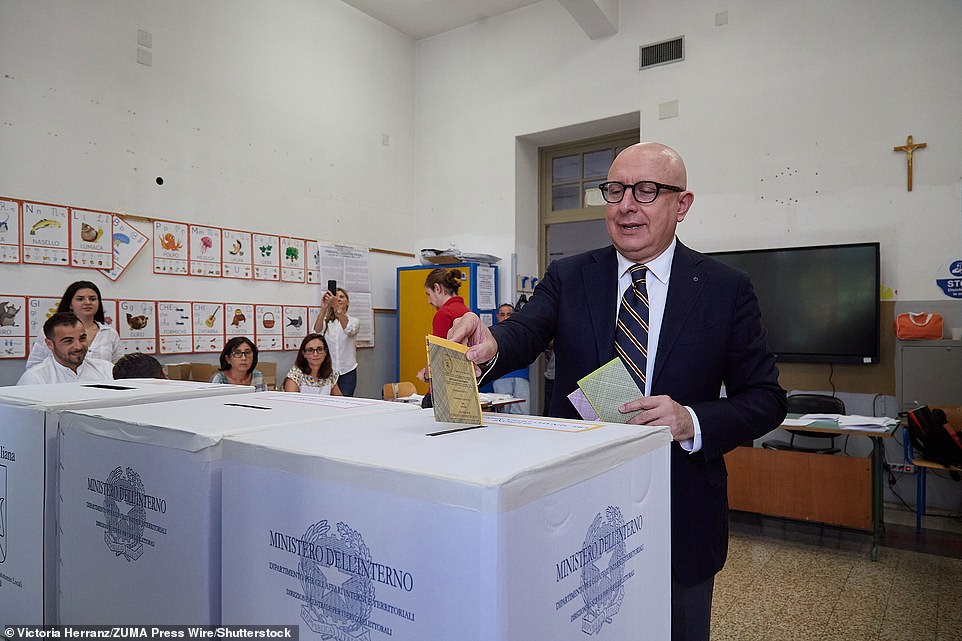 Early elections were triggered by resignation of Prime Minister Mario Draghi in July, following the collapse of his big-tent coalition left, right and centrist parties

The funds are tied to a series of reforms only just begun by outgoing Prime Minister Mario Draghi, who called snap elections in July after his national unity coalition collapsed.

Despite her euroscepticism, Meloni strongly supports the EU’s sanctions against Russia over Ukraine, although her allies are another matter.

Berlusconi, the billionaire former premier who has long been friends with Vladimir Putin, faced an outcry this week after suggesting the Russian president was ‘pushed’ into war by his entourage.

A straight-speaking Roman raised by a single mother in a working-class neighbourhood, Meloni rails against what she calls ‘LGBT lobbies’, ‘woke ideology’ and ‘the violence of Islam’.

She has vowed to stop the tens of thousands of migrants who arrive on Italy’s shores each year, a position she shares with Salvini, who is currently on trial for blocking charity rescue ships when he was interior minister in 2019.

The centre-left Democratic Party says Meloni is a danger to democracy.

It also claims her government would pose a serious risk to hard-won rights such as abortion and will ignore global warming, despite Italy being on the front line of the climate emergency.

On the economy, Meloni’s coalition pledges to cut taxes while increasing social spending, regardless of the cost.

However, around 20 per cent of voters remain undecided, and there are signs she may end up with a smaller majority in parliament than expected.

In particular, support appears to be growing for the populist Five Star Movement in the poor south.

The next government is unlikely to take office before the second half of October.

Magistrates with criminal records to boost diversity and end shortage

Sia Performs ‘Together’ at Home With Maddie Ziegler for ‘Tonight Show’ – Watch!

Where is Ghislaine Maxwell now? – The Sun