Home » World News » Airport rail is 60 years in the making, let’s not get it wrong

Rail to Melbourne Airport was planned by Sir Henry Bolte in 1963 before the new airport at Tullamarine even opened. A 1990 Melbourne Airport Strategy identified the need for a rail link from the CBD. In February 2000, the Bracks government instituted studies of alternative routes to the Airport resulting in land being reserved in 2005 for an airport rail link via Albion. In April 2014, the Napthine Coalition government committed to build the line if re-elected later that year, however it lost the election to Labor.

With Labor re-elected in late 2014, Airport Rail was initially said to be a low priority. In October 2017, Labor’s Victorian Infrastructure Plan suggested a timeframe of 15 to 30 years. However, community and institutional pressure had built steadily and barely a month later, Premier Andrews announced that,“by the time the Metro tunnel is completed in 2026, construction will be well underway on an airport rail link”. 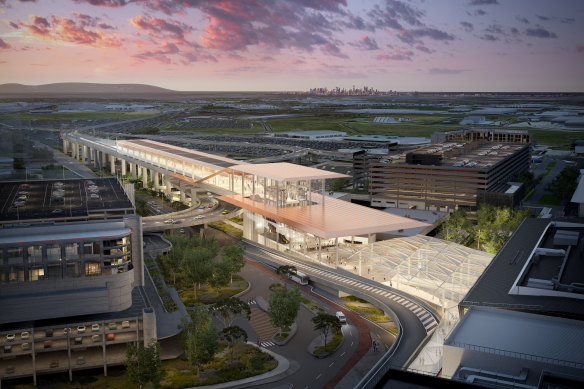 An artist’s impression of a new elevated station to connect the $13 billion airport rail link to Melbourne Airport.

Significantly, the Premier added, “it can create the extra capacity that we need in the congested rail corridor between Melbourne and Sunshine – which means we can untangle the regional and metropolitan network on the Geelong and Ballarat lines. It can give Melbourne’s booming west access to electrified metro rail services.”

These additions became the government’s Western Rail Plan, firmly committed to in October 2018, just prior to the last state election. In May 2019, Minister Jacinta Allan said, “The Western Rail Plan is one of the vital projects our growing city and state needs … it’s part of our suburban rail and road blitz …” Sadly, that “blitz” is yet to see the light of day and may be a long time coming.

A key component of the Western Rail Plan included high-frequency metro electric services to Melton and Wyndham Vale. Coming through the new Melbourne Metro tunnel, Melton trains would alternate with Sunbury trains, some running every five minutes during peak periods. The Airport railway, essentially a branch line from Albion, was originally conceived on the basis it could be shoe-horned through Melbourne Metro along with Melton services. Since then, massive residential growth in Melbourne’s outer west has meant that Melton and Sunbury trains would, between them, consume the Metro tunnel’s total capacity. The choice became whether to accommodate Airport trains or Melton trains, but not both.

An unsolicited private sector proposal to construct and finance a separate, partly underground pair of tracks between Southern Cross, Sunshine and the airport and provide a fast service with dedicated rolling stock came to the government in September 2018. This would have provided badly needed additional capacity in the Sunshine corridor and facilitated provision of metro services to both Melton and Wyndham Vale. By November 2020, the government decided to reject the proposal, understandable if it did not want to be burnt by another unsolicited PPP, given the debacle of the West Gate Tunnel project.

Subsequently, re-confirmation came that the airport line would link to the Sunbury corridor at Sunshine, with airport trains running through the Metro tunnel every 10 minutes.

Today, in 2022, early works will soon commence to construct the airport line. Designs are largely finalised, although an issue remains as to whether the airport station will be on an elevated structure or underground. However, the project is not without controversy with the Sunshine/Albion community and Brimbank Council very unhappy about a 20-metre-high flyover structure proposed at Albion, seen as seriously compromising the heritage precinct under development there. The Auditor-General has also criticised some aspects of the project business case, probably rightly, but that won’t impede the project.

It still requires multiple statutory, environmental and heritage approvals but, if forthcoming, construction should be underway in 2023 with completion predicted for 2029. Based on other recent rail projects, my guess is that physical completion could be achieved up to two years ahead of that target.

Meanwhile, the response to long-suffering residents of the burgeoning Melton and Wyndham municipalities appears to have been one of “kicking the can down the road” for years to come. To date, the government’s silence in addressing the dire needs for vastly improved public transport in these areas has been deafening. Perhaps this might be reflected in the community response when it comes to voting on November 26.

Our Rail Futures Institute is promoting East-West Metro Rail, a project embodying the best features of the Western Rail Plan and Melbourne Metro 2, another project languishing in earlier government plans but without any commitment to progress. East-West Metro Rail will provide frequent metro electric train services from Wyndham Vale via Werribee and Melton, connecting with airport rail at Sunshine.

It will also greatly improve train frequency to Wyndham Vale via Sunshine, add five new stations between Werribee, Wyndham Vale and Deer Park and another on the Melton line. The project will link the western suburbs to Melbourne’s CBD via Fishermans Bend, providing a massive stimulus to the delayed development of that precinct.

Full details of East-West Metro Rail are on our website www.railfutures.org.au.

Let Barbie be your Valentine this year: Her gift guide for 2021