Putin slams ‘beautiful, pretty’ US TV interviewer for not listening to his argument about gas war with Europe while also hinting he could stay in power until 2036

Vladimir Putin has slammed a ‘beautiful’ and ‘pretty’ American news anchor for not listening to his argument about the gas war with Europe.

The Russian president accused CNBC’s journalist Hadley Gamble of acting as if she ‘didn’t hear’ what he said after she questioned his denial that Russia had withheld gas from Europe during an on-stage interview in Moscow.

During the exchange, Putin also hinted he could stand again for the presidency and stay in power until 2036.

Putin insisted his country has always kept the taps into Europe open, including during the Cold War, and dismissed any suggestion that he is throttling supplies as ‘complete nonsense’.

He showed his irritation at Western claims that he has weaponised gas for geopolitical gains, and separately claimed European leaders were ‘out of their minds’ in the gas war.

During the interview at Russian Energy Week, Putin taunted Gamble, saying to the audience: ‘Beautiful woman, pretty, I’m telling her one thing. She instantly tells me the opposite as if she didn’t hear what I said. Well, I’ll repeat it for you once again.’

At this point, Gamble interrupted and told the Russian president she had ‘heard’ him, but claimed the Russians took ‘long enough’ to address the gas supply issue. 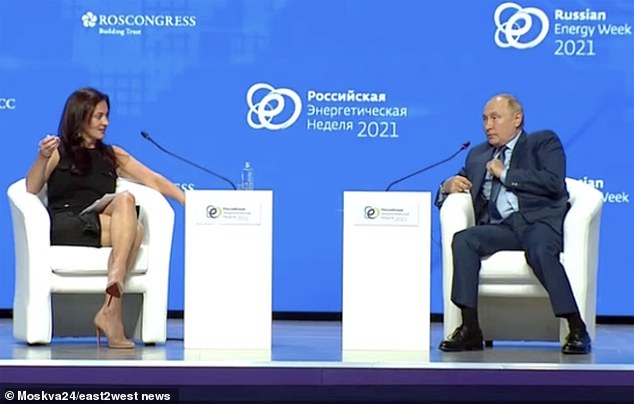 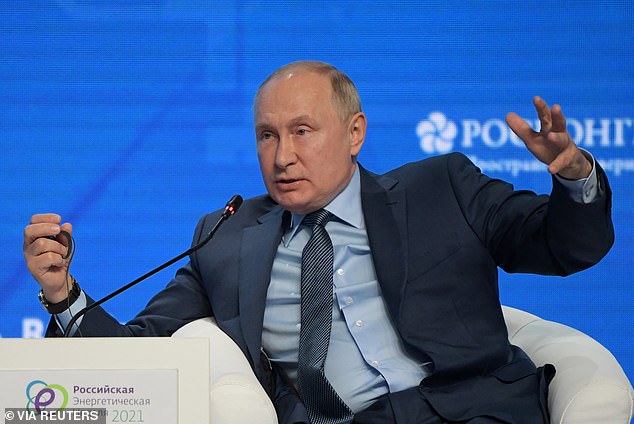 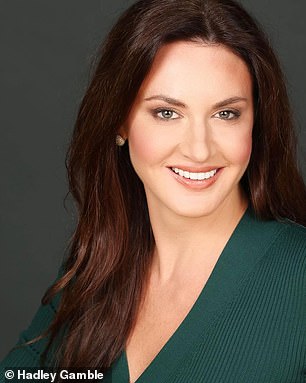 During the tense exchange, Putin said: ‘Listen, you’ve just said “You don’t supply gas to Europe through pipelines”. You are being misled.

The Russian media said Putin had used the reference to her looks to push back against Gamble, but added that calling her ‘beautiful’ was a ‘compliment’.

Putin also claimed the US and other suppliers to Europe had reduced gas flows.

He said: ‘If we are asked to increase more, we are ready to increase more. We are increasing [supplies] for as much as our partners ask for. There has been no single rejection.’

Putin also dismissed suggestions he is exploiting the energy crisis to get the Nord Steam 2 pipeline approved as ‘politically motivated blather’ – though added that opening the pipe will ‘significantly decrease’ gas prices.

One of Russia’s main routes for pumping gas into Europe currently runs through Ukraine, which makes about $1billion per year in fees for maintaining the line.

The Nord Stream 2 pipeline would bypass that route by going direct to Germany, depriving Ukraine of the money.

The move would also hurt Poland, which sits along another major gas route – a move observers say would punish the two countries for allying closely with Europe.

In addition, it would make Europe more reliant on Russian gas – handing Putin power and leverage over the continent. The US has opposed the line for this reason.

It now only needs the approval of European regulators to begin pumping gas.

During the interview with Gamble, Putin refused to say who he would anoint as his successor and hinted he could stand again in 2024 for another six year term.

When asked whether he wanted to be President until he was 84, Putin said: ‘I prefer not to answer such questions. There is quite a lot of time until the next elections.

‘Talks about this subject destabilise the situation.’

In theory the constitution would allow Putin two more full six-year terms starting in 2024 and 2030.

‘The situation has to be calm, stable, so that all authoritative bodies, all state structures work with confidence and calmly look into the future,’ he said. ‘Yes the Constitution allows me to do it, to run for the next term. But there were no decisions made about it yet.’

If and when he quits, Putin would be a senator for life with legal immunities.

Russians have produced memes showing what Putin – nine years younger than US president Joe Biden – would look like if he clings to power in the Kremlin until 2036. 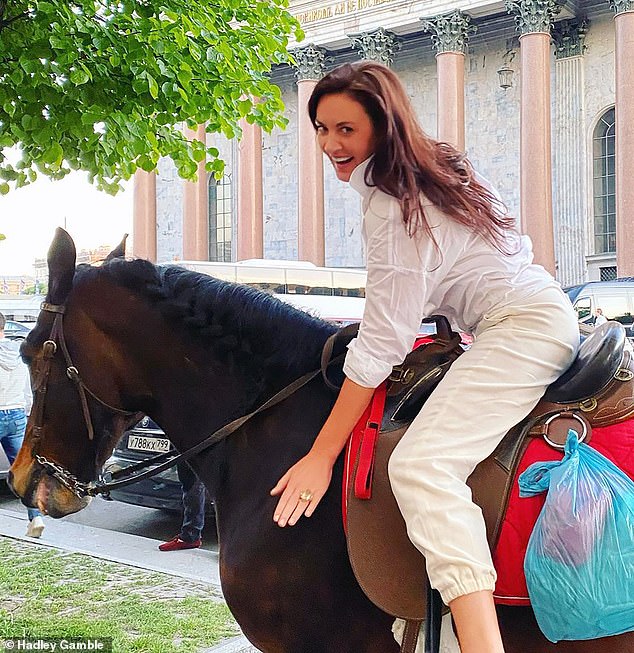 Hadley Gamble, CNBC News Anchor and International Correspondent on a horseback in St Petersburg, Russia, during St Petersburg Forum of Economics in June 2021 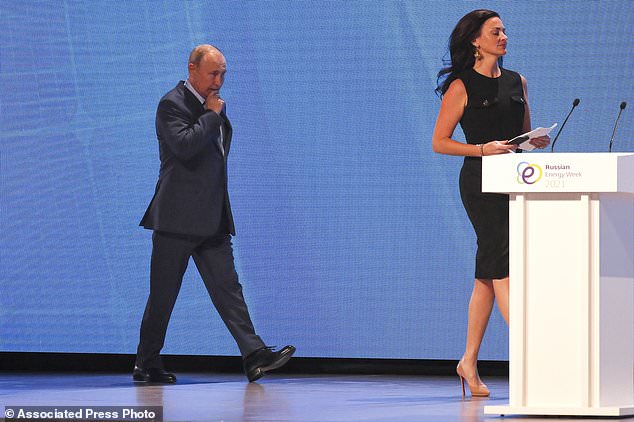 While there has been speculation over his health – and he this week denied suffering from Covid-19 – he recently restarted travelling around Russia following the pandemic and undertakes a gruelling workload.

But he admits to almost daily medical checks .

Russia’s top woman politician Valentina Matviyenko, speaker of the Russian upper house, told him in a televised broadcast that his colleagues were ‘worried’ about his ‘health’.

‘You were coughing at the meeting – we were all worried,’ she told him. ‘We’re worried about your health.’

A recent poll found 47 per cent of Russians were in favour of Putin staying on in 2024, a slump of 20 points in four years.

Putin first came to the presidency on the last day of 1999, and has remained there since except for a four year period between 2008 and 2012 when he served as prime minister.

Anthony Weiner on the prowl for a book deal

NASA gets ‘powerhouse’ that will bring astronauts to deep space