The 40-year-old’s reputation is in tatters after she scored one of the worst own goals in British legal history when a High Court judge dismissed her evidence as ‘evasive or implausible’.

Vardy was accused of deliberately deleting WhatsApp messages central to the case as it was suggested her agent also intentionally dropped her phone in the North Sea.

Mrs Vardy and her footballer husband were left with the bill after Mrs Justice Steyn ruled in favour of Mrs Rooney in a judgment that said swathes of her evidence given under oath had been ‘manifestly inconsistent’, ‘not credible’ and needed to be treated with ‘very considerable caution’. 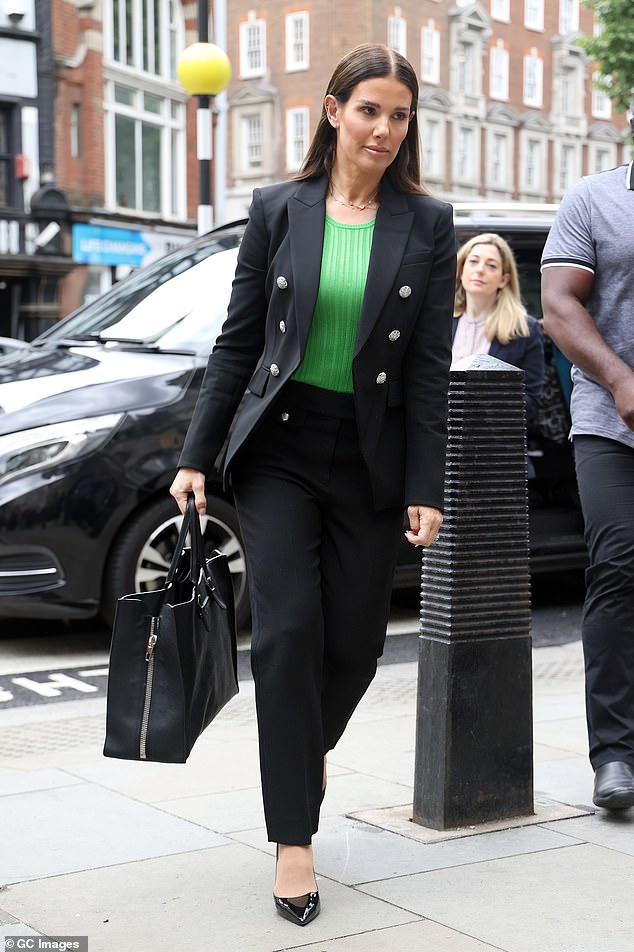 Rebekah Vardy, pictured here arriving at the High Court, was branded a ‘highly unreliable witness’ by Coleen’s lawyer in his closing remarks 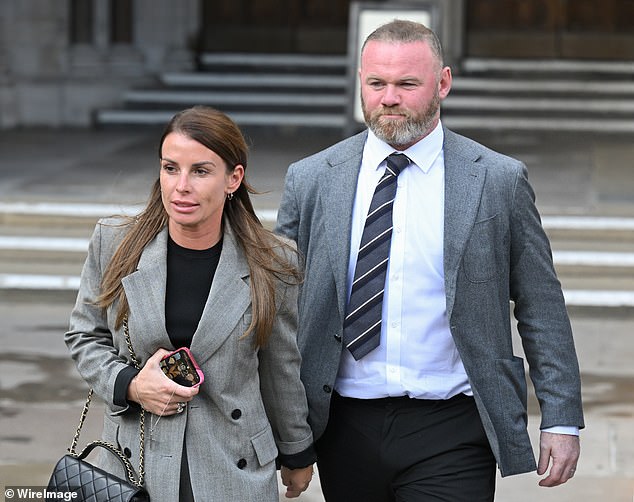 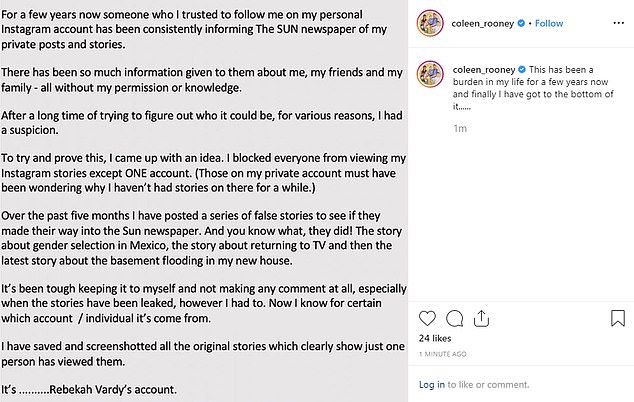 It followed a viral social media post where Coleen had revealed she had put false stories on her Instagram page. These fake tales then emerged in The Sun newspaper.

Because she had changed her settings so only one user could see it she felt confident to make the famous declaration ‘it’s….Rebekah Vardy’s account’.

In an order made public on Tuesday, the judge ruled that Mrs Vardy should pay 90% of Mrs Rooney’s costs.

Mrs Rooney incurred total costs of more than £2 million, but £350,000 of those had already been racked up before the trial in May, so those were removed to produce a final figure of £1,667,860. 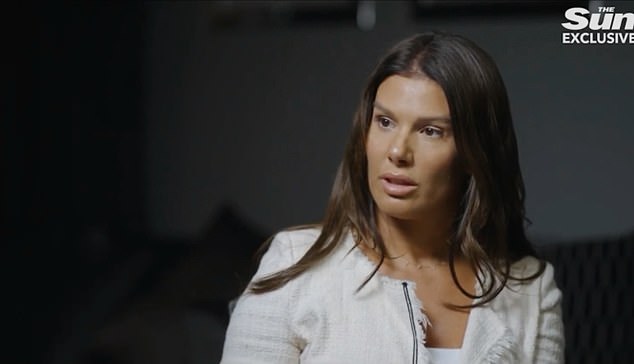 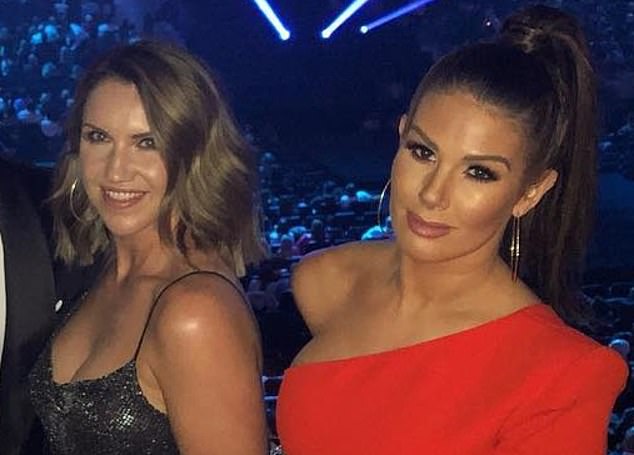 Ms Watt withdrew from the Wagatha Christie case for mental health reasons but was repeatedly mentioned in evidence. They are both pictured at a TV event

September 2017 to October 2019 – The Sun runs a number of articles about Coleen, including that she travelled to Mexico to look into baby ‘gender selection’ treatment, her plan to revive her TV career and the flooding of her basement.

October 9, 2019 – Coleen uses social media to accuse Rebekah of selling stories from her private Instagram account to the tabloids. It prompts #WagathaChristie to start trending.

February 13, 2020 – In a tearful appearance on ITV’s Loose Women, Rebekah says the stress of the dispute caused her to have severe anxiety attacks and she ‘ended up in hospital three times’.

June 23, 2020 – It emerges that Rebekah has launched libel proceedings against Coleen.

November 19-20, 2020 – The libel battle has its first High Court hearing in London. A judge rules that Coleen’s October 2019 post ‘clearly identified’ Rebekah as being ‘guilty of the serious and consistent breach of trust’.

Mr Justice Warby concludes that the ‘natural and ordinary’ meaning of the posts was that Rebekah had ‘regularly and frequently abused her status as a trusted follower of Coleen’s personal Instagram account by secretly informing The Sun of Coleen’s private posts and stories’.

February 8-9, 2022 – A series of explosive messages between Rebekah and her agent Caroline Watt – which Coleen’s lawyers allege were about her – are revealed at a preliminary court hearing.

February 14 – Coleen is refused permission to bring a High Court claim against Ms Watt for misuse of private information to be heard alongside the libel battle. A High Court judge, Mrs Justice Steyn, says the bid was brought too late and previous opportunities to make the claim had not been taken.

April 13 – Ms Watt is not fit to give oral evidence at the upcoming libel trial, the High Court is told as the case returns for another hearing.

May 10 onwards – The trial began

She will also have to pay costs incurred by seven journalists who were potential witnesses but did not give evidence – apart from a portion of their costs which Mrs Rooney has already been ordered to pay.

The judge ruled on various issues relating to Mrs Rooney’s costs after receiving written legal arguments on behalf of both women.

Mrs Justice Steyn said there were certain issues which arose during the week-long trial which justified the reduction of 10% in the amount Mrs Vardy has to pay, including Mrs Rooney’s allegation that Mrs Vardy was one of the people behind The Sun’s ‘Secret Wag’ gossip column.

The judge said in the court order: ‘In particular, the weak allegation that the claimant was the Secret Wag added considerably to the work by the claimant’s representatives, the concession in respect of serious harm was made late, and the (Mrs Rooney’s) public interest defence was unsuccessful.

‘However, given the defendant’s success on the defence of truth which was at the heart of this claim, and the degree to which there was overlap between the issues, I consider that the appropriate reduction is 10%.’

Mrs Vardy had argued for a reduction to 80% while Mrs Rooney contended there should be no reduction at all.

The final figure of costs Mrs Vardy has to pay may be reduced further if she does not agree to pay the total incurred by Mrs Rooney and, at a later date, a court considers some of those costs to have been unreasonable.

The total amount of Mrs Vardy’s legal costs is not known but is expected to be of a similar level to those incurred by Mrs Rooney.

Paul Lunt, partner and head of litigation at law firm Brabners, who represented Coleen Rooney, said: ‘The High Court has today decided that Rebekah Vardy must pay Coleen Rooney’s legal costs on an indemnity basis – the highest basis that the court could order.

‘The reasoning given for this decision is that there was a finding at trial that Rebekah Vardy had deliberately deleted or destroyed evidence.

‘That behaviour falls outside the ordinary and reasonable conduct expected of a party in legal proceedings.

‘This followed a separate finding regarding the loss of evidence that was in the possession of Rebekah Vardy’s former agent, Caroline Watt.

‘Coleen’s pursuit of that evidence is a major reason why her legal costs increased substantially from the original estimates given to the court long before the start of the trial.

‘Rebekah Vardy has been ordered to pay £800,000 to Coleen Rooney by November 15 as an interim payment until the final total she must pay is either agreed or decided upon by the court.

‘Naturally, Rebekah will also be responsible for her own legal costs of bringing her failed libel action against Coleen.

‘Today’s decision also makes Rebekah liable to pay for legal costs incurred by certain journalists from News UK, publishers of The Sun newspaper, following her unsuccessful efforts to involve them in the proceedings.’

The 10 Highest Selling Hip-Hop Albums Of All Time

Who is Alev Aydin, Halsey’s rumored boyfriend and baby’s father?